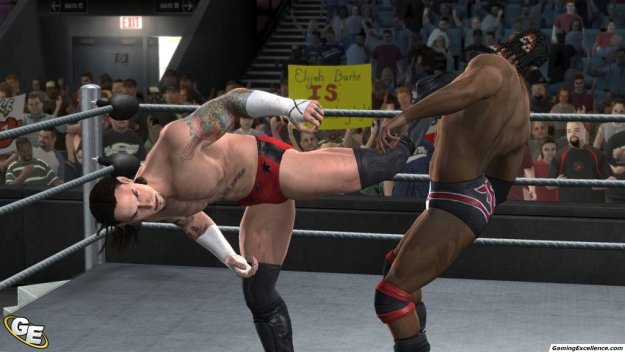 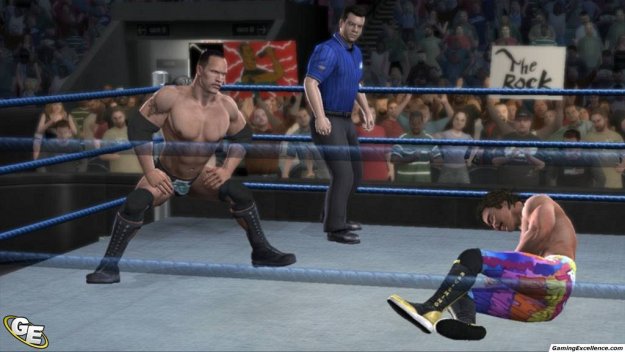 For most sports games today, every new year means a new version. All we need are better graphics, updated characters, and hopefully some new system of play to justify the need for an upgrade. Smackdown VS RAW 2008 is the latest wrestling game to hit the market. Like its predecessor, the latest entry in the franchise was developed by Yukes and boasts more playable characters, better graphics, and thankfully some excellent new gameplay features.

Essentially, the 2008 version is the same as 2007. You can compete in almost every conceivable wrestling match you can imagine, such as Royal Rumble, hardcore, four man steel cage match and even my new favorite; 'buried alive.' In this match type, you have to beat your opponent out of the ring, eventually forcing them into a coffin and shutting the lid. The amount of customization that can be done in this game is staggering. Well beyond just creating your own custom wrestler and adjusting their stats, this version takes it much further. Custom tournaments where you make the rules are one thing; this time around you can go as far as adjusting the likelihood of certain attacks hitting or being countered. Also, should you feel the need, custom entrances for your newly created wrester or revamps of current superstars' entrances can be created, edited and played through with a unique editing system. You can even go as far as to rip music onto your hard drive and use it as your entrance theme.

One problem that now seems standard with these wrestling games is the lag when playing with a friend via multiplayer or online. In certain situations the animations jump, and often you could blink and your character is now across the ring from where he was. I know this occurs because there is just so much going on, on the screen, but at this day and age with these new powerful consoles, such jumps or lags are just plain unacceptable.

Graphically, the 2008 installment of Smackdown delivers what you would expect from today's next-gen titles. The virtual wrestlers look like the real superstars, not just because the models and textures are so accurate, but the animation of the various moves and actions is interchangeable from what you'd see on TV: especially with the wrestlers' signature moves. Unfortunately, however, these advances in the graphics are the likely cause of the jumps and lags that occur when playing.

Frame rate issues aside, there really are some great new features for 2008, the most noticeable being the new superstar fighting styles. The 6', 350lbs wrestler certainly isn't capable of performing the acrobatics of his 5'5", 190lbs counterpart, so why shouldn't there be separate styles for different types of fighters? Each has its own exclusive moves, abilities, and even specialized power ups for the different classes. Here you get eight different fighting systems to choose from. Whether you want to be a Powerhouse and beat your opponent silly in Rampage mode, a Showman and be able to steal your opponents finishing move, or a Dirty fighter and be able to use the referee as a shield or simply remove the turnbuckle for more effective Irish whips. The new fighting styles let you wrestle how you want to wrestle.

A new addition to the single player game is the 24/7 mode. Here you get to live the daily life of a wrestler, starting from being a nobody and working (winning) your way to legendary status. Daily is the operative word here: you literally have a full calendar for the year, which even when completed, and your wrester has reached legendary status, can be redone as many times as you want. Throughout this year of competition, you end up taking part in all the events WWE has to offer: one on one grudge matches, hardcore, and even tag team matches where a partner is forced upon you. When not booked to wrestle in a match of your own, you can invade that day's show and run interference in someone else's match, star in commercials, or sign autographs. All this builds up your character stats and earns money which can be spent on new wrestlers, outfits, and abilities. While a lot of detail has gone into 24/7 mode, there are some problems with the actual interface and the playing system in general. For the interface, you are placed in a virtual locker room, with a calendar, cell phone, laptop, and a magazine. While the calendar simply shows your daily schedule, your cell phone is your source for the general abuse you must take from your fellow wrestlers. The laptop is used to monitor your and others stats, but would have been better suited doubling as an email receptacle as the actual phone calls you receive on your cell have no voice acting and are just read to find out what's going on. The playing system, or actual wrestling, has one particularly ugly flaw in this mode: injuries. Naturally, if you were actually competing and working out all day - every day, injuries can and will happen. In 24/7 mode you will get hurt, and your doctor will tell you that you need anywhere from 2 to 8 weeks to recover. Here's the problem: there is no option of sitting out and recovering! Why even put injuries into play if you have no option of doing anything about them? When you get hurt, you simply have to continue wrestling and put up with the fact that you start your matches all ready damaged.

You will be satisfied with the controls once you get used to the thumbstick grapples and counters; however, when you are dazed, the game resorts to button mashing in order to recover your senses. Button mashing aside, all grapples are accomplished by flicking the right thumbstick for a standard grapple and holding right bumper as well to initiate ultimate control grapples. The real advantage to the thumbstick controls is the struggle submission system. When you have your opponent in such a hold, you increase the tension by rotating the thumbstick. The way the system is designed is what makes it so good: you can't just apply full pressure at all times, if you do your hands eventually slip and you lose the hold. You have to let go of the stick to get a better grip on your opponent, but when you do this they have the chance to counter and escape. This makes both the giving and receiving of submissions much more interactive and fun.

Ultimately, Smackdown VS RAW 2008 is a lot of fun to play. The finishers are simple to do, the grappling system controls great, and the actual wrestlers themselves are bang on in appearance, attitude and abilities. Fans of wrestling on TV will love that ECW superstars are included, adding to the mass of potentially playable characters. The only real problem is the lag factor present in the online multiplayer matches (the same problem was evident in last years edition as well). For hardcore wrestling junkies, the 2008 edition should make a worthwhile upgrade. For those on the fence, or if you already own last years release, it's worth a rental at least.