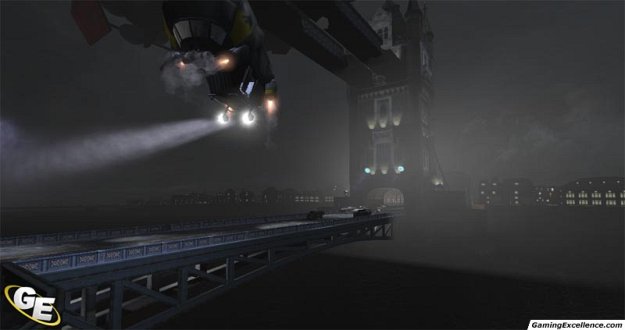 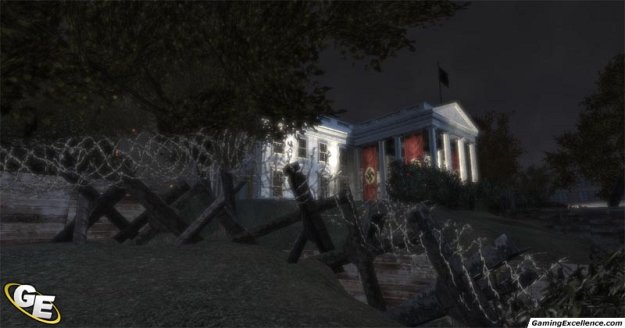 One thing that I've always wondered about while playing the plethora of WWII shooters on the market is how veterans of the war would feel about their plight being packaged for profit and entertainment. Also, as someone of Jewish descent, should I really feel good about blasting away wave after wave of enemies who only sixty years ago wanted my race obliterated from the map? I suppose it's a moot point now, because I still enjoy a good WWII shooter, despite the fact that the genre has all but been run into the ground.

I went into Turning Point with pretty high expectations due to its intriguing concept. Turning Point asks the question; What if Winston Churchill had in fact been killed by the careless New York cab driver that left him walking with a cane for the rest of his life? Instead of increasing the morale of troops fighting in Europe with his stunning leadership and silver tongue, there was no capable leadership in his place, and Germany overtakes Europe with little resistance. With Europe wrapped up, the Germans have set their sights on invading the United States. An outlandish scenario to say the least, but it's an intriguing premise for a video game.

In Turning Point, you play as Dan Carson, a construction worker working on a New York high-rise. As the German army invades, you must precariously navigate the bare girders of an unfinished high-rise as the bombs begin to fall. It's an adrenaline pumping sequence that provides a bravura introduction to the game.

Things go rather sour from there. While there are some incredible set-pieces to the game like a fire fight under a collapsed Chrysler Building or storming a German controlled White House, there are also countless corridor crawls that could be taking place anywhere in the world. The developers unfortunately didn't take full advantage of the possibilities for an all-out German invasion.

Speaking of the possibilities of the premise, it's extremely unfortunate that the storytelling is very weak. The gamer is given no insight into the Nazi motivations, or the motivations of the American resistance for that matter. Even your main character is left maddeningly underdeveloped. You know his name is Dan Carson, and he's a construction worker, that's it. I only even know his name is Dan because I looked it up in the manual, as everyone in the game calls him Carson. Carson is a killing machine that apparently has amazing proficiency with weapons and can soak up bullets like a sponge. I also found it very hard to swallow that a construction worker can single-handedly take on the entire German army. You even stay in the construction worker outfit throughout the whole game, instead of putting on some army fatigues.

The poor storytelling only makes the derivative gameplay that much more glaring. Turning Point is your average run-of-the-mill shooter. It's completely linear in its level design, and there's always a point A to point B mentality. When it looks like you can jump over that small pile of rubble to the open street, invisible walls will constantly keep you on track. Even the wide open city levels have a painful corridor shooter feel to them that remains unsettling throughout the game's five to six hour length.

Still, if you're not sick of shooting Nazis yet, the actual shooter mechanics here are solid enough. While your arsenal will seem familiar to any Call of Duty veteran, there are a few conceptual weapons here that are assumed the Germans had in development. You'll get an infra-red sniper rifle and a rapid fire rocket launcher in addition to your average WWII payload. Strangely enough, the American weapons are significantly less accurate than their German equivalents, and firing from the hip proves far more accurate than looking down the iron sights.

You'll also be able to do melee grapples which allow you to take human shields, commit instant kills, or in a few cases execute environmental kills. The environmental kills can include throwing an enemy off a building, crushing them with a truck, or drowning them in a toilet. The system is seamless and quick when it works, but unfortunately the prompt sometimes doesn't show up on screen, leaving you wide open for a few bullets to the chest. There's no other melee option, so if that prompt doesn't show up, you might as well relegate yourself to the game over screen. Still, it works more often than it doesn't.

What may frustrate most players are the sparse checkpoints that force players to go through certain sections over and over. Some levels even only have a single checkpoint halfway through the level. Nothing is more frustrating than getting gunned down as a result of taking a wrong turn down a corner, only to have to replay most of the level over again as punishment.

The gameplay is also betrayed by a myriad of glitches which run from hilarious to nearly game breaking. Glitches can be funny like watching a crouched enemy slide across the floor or watching your comrades constantly shoot at an unoccupied couch. On the other hand, you'll get caught on scenery forcing a restart to full out crash bugs.

The AI in general is also very poor. Enemies will charge straight at you, and most will wait a few seconds before firing at you, leaving them wide open for a bullet to the head. Never once was I flanked or outsmarted by these enemies. You co-operative AI is even worse. They'll constantly get in your line of fire, and I didn't see them take out a single enemy for me, leaving me to win the war on my own.

Controls are serviceable, but there's an odd design choice in which you look up and down faster than you look side to side, making aiming a bit of a chore. Also, switching weapons is mapped to the D-pad despite only having the ability to carry two guns, and the button layout seems baffling and completely different than any other console shooter.

When the game isn't in motion, the graphics are very solid. Lighting effects are convincing, and weapons are well modelled, despite taking up too much screen room. Textures are well defined and the levels look good, if not a little bland. At the same time, the framerate dives whenever the action gets harried, which is very common. Character animations seem pretty goofy, especially when the camera jarringly shifts to a third person view when climbing or performing melee kills. Also, as is a problem with many Unreal engine titles, blurry textures appear before snapping to their high resolution equivalents. However, in Turning Point, sometimes the higher resolution textures won't load, resulting in a blurry, pixelated mess.

Multiplayer is a weak excursion that really isn't worth your time. You're only given two modes, deathmatch and team deathmatch. Multiplayer also suffers from the same framerate problems that the single player game encounters. This won't pull you away from your Halo's and Call of Duty's.

Audio in Turning Point is fantastic. The soundtrack by Michael Giacchino is an adrenaline pumping marvel, and really helps set that war movie mood. The weapons also all sound appropriately punchy and powerful, turning your living room into an acoustic battlefield. Even the sparse voice acting is serviceable, despite that no characters will ever speak to you unless it's scripted.

If you aren't sick of shooting Nazis yet, Turning Point provides a barely serviceable alternative that unfortunately doesn't capitalize on its intriguing premise. The glitches and poor level design don't quite ruin a game that should have been so much more than the sum of its parts. Still, there's some fun to be had here with a weekend rental.