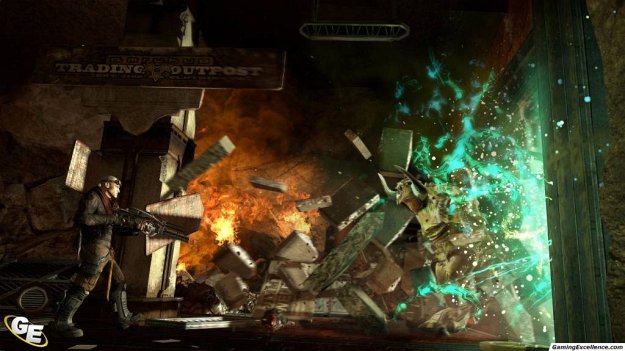 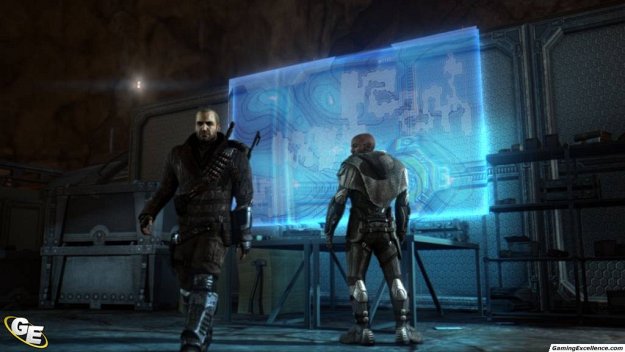 There are few games that excite the raw destroyer deep within us as the Red Faction games. In these titles it's not just shooting a soldier or blowing up a tank. It's about seeing how you can destroy everything, from enemy troops to vehicles and scenery, in as devastating a manner as possible. Really that's what we're paying the entry fee for people. Graphics, story, cutscenes... these are things that a fan of the series does not need. Luckily those haven't been ignored either, so it's all the more to squee over.

As I'm sure you know by now, unless you've been living under a rock with no Wi-Fi, Armageddon tells the story of Darius Mason. Being the grandson of Alec Mason, the hero of Guerilla, and his ally Samanya, he comes from a long history of people who find the role of hero thrust upon them.

In the first level we were allowed to demo at THQ Gamers Week 2011 we get to see just how the people of Mars were driven underground. It seems that some lunatic has gathered a doomsday cult that is attacking the Terraformer, the very object that keeps the surface of the red planet habitable. It's up to Darius, and the meat shield soldiers that accompany him, to stop the cult. Unfortunately, as is apparent in the back story, he is going to fail.

This level is a fine introduction to many of the elements that make up Armageddon. The exterior portion of the level lets you familiarize yourself with the game again as it feels very similar to RF: Guerilla. The main change that stood out is the auto lock system. Instead of having an aim button that makes fine aiming easier, when you press down on the left trigger Darius' aim automatically snaps to the closest person in front of you. This feels like a blessing and a curse as while it puts your aim right on the target you're shooting at it does make it very hard to fine aim especially when using explosives against moving targets where you must lead the victim. How useful or impeding this proves to be will only be known when the full game is released.

But once you get indoors, that's when the real fun begins. Much of the scenery here is easily destroyed and since the enemies love to use rocket launchers you're going to constantly need to repair your path with the Repair function of the Nano Forge Darius wears on his arm. While this function has been well documented in the press the interesting news is that it can be done infinitely, used as much or as little as the player chooses. The new ability that was unveiled is Impact. This burst of energy sends enemies flying, slamming them into walls (killing them), off of ledges (killing them) or just to the ground where you can fill them full of lead. That kills them too by the way.

After fighting off a rather powerful powered suit the demo bumped us to the next level. In this level Darius was unfortunately present when the creatures have been released. In a ridiculously short time these beasts have destroyed the civilization the people of Mars have built underground. The Ravagers, red and yellow arachnid type monsters, are the creatures you will be fighting early on. These beasts come out of the walls themselves and attack Darius primarily in melee, trying to tear him apart, although some others hang onto the walls to shoot at you.

During the course of this stage, using conventional weapons along with some fun explosives and the always awesome magnet gun. Several of these guns are more useable and accurate versions of the weapons from Red Faction Guerilla. Two examples of this are the Singularity Cannon, replacing the bombs, and the Charge Launcher, replacing the Remote Charges. But things get even livelier when you get into an armored exosuit, unleashing missiles and automatic weapon fire on all those pathetic creatures that get in your way.

An interesting thing to note is that this game is, to put it lightly, rather difficult. Not just a little difficult but falling close to the hard as hell category. If you're not a crack shot, or not comfortable with the snap-to aiming, then this game is going to give you a rough time. But overall the increase in difficulty is actually more in line with the original Red Faction, which makes it something of a welcome return to form for the series.

The last level is an open playground of destruction for players to screw around on the surface. While this is clearly a test level of sorts we have some very high hopes that free ranging destruction modes will be available to let gamers explore all of the fun ways you can obliterate the world. Attaching a magnet to a giant gas tank to a building and watching the thing get leveled is an amazing, destructive and beautiful sight.

Red Faction Armageddon drops in May this year. Coinciding with this release is a made-for-TV movie that will air on the SyFy channel, detailing the events that occur between the two games. That's a whole lot of Red Faction coming in May so that's going to be a good month for the fans of this series. Unless SyFy does some nasty things to that movie but we're crossing our fingers!