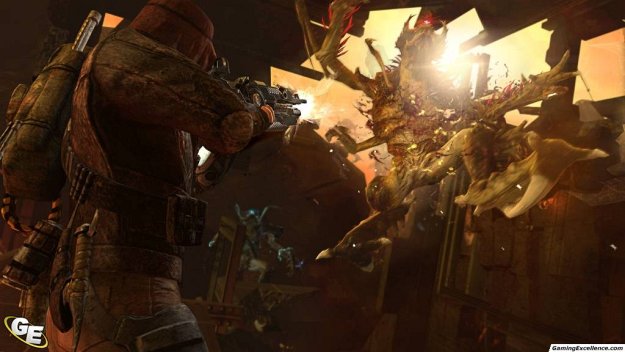 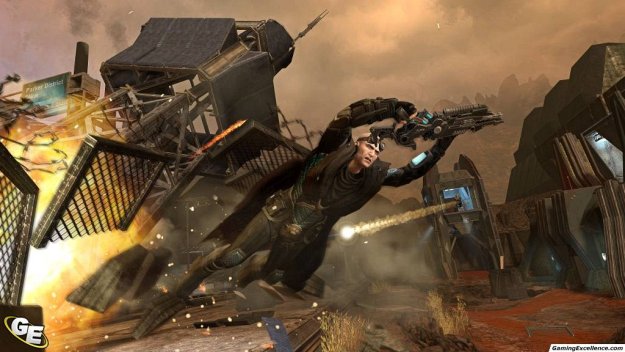 When word came around that Red Faction Armageddon was going to trade in the wide open dunes of Mars' surface for the underground tunnels of the first game reactions were mixed. Some thought that the loss of the open world environment would harm the gameplay or that it would make the game bland to look at. Some others, this editor included, thought that the change would make for a more focused, story driven game that could outdo its predecessors.

Well all I have to say now is... Oh yeah! In yo' face! Red Faction Armageddon is without a doubt one of the best games released so far this year. It's an action packed third person shooter with a number of tricks up its sleeves that set it apart from other shooters on the market. Guerilla might have had more buildings and structures for you to destroy than this game does but what it lacks for in destruction it makes up for with new tricks up your characters proverbial sleeve.

As anyone who has followed the myriad of previews we've posted here on GamingExcellence Armageddon follows Darius Mason, grandson of Alec Mason, the hero of Red Faction Guerilla. In the prologue level the terraformer that keeps Mars habitable by humans is wrecked by a bizarre cult led by a man named Hale. The years after this have forced the natives underground, back into the mines they worked for so long. But when Mason unwittingly releases a race of monstrous creatures from the temple they were buried under the survival of Mars is at stake.

Setting this game apart from the other games in the series, the story and characters are all quite entertaining. Not since the first game in the series has a game in this series had such a focused, well written story that kept you pushing forward. All of the characters are well written and entertaining to listen to, happily bantering even as they fight for the survival of their people. It's as much fun to listen to as it is to play at times.

That's not to say it isn't fun to play in any way though as this is a fantastic experience. The controls are fairly tight, making it easy to gun your way through a room full of cultists or monsters and it's all very responsive. The only real hiccup is in the auto-lock system. This works kind of like the "snap to target" feature in Call of Duty where when you pull up the iron sights you snap to the nearest target. Unfortunately it makes you so accurate that fighting humans feels like cheating while using it on the bugs is almost a necessity.

Why is it a necessity? Because there's only four basic enemy types in the game. You've got the Cultist, the small mostly melee creature, the larger mostly ranged creatures and then the giant brutes that use elemental attacks. Cultists die in droves and the melee creatures come right to you but those other two guys are just obnoxious. The ranged ones can be hard to see on the walls as they leap all over the room, almost as hard to follow as they are to shoot even when they do stop moving. Even when you are facing them it can be hard to get a shot off on them without the lock on system. Whether you choose to use it or not it leaves things feeling just a bit unbalanced in one direction or the other.

The lack of enemy variety is one of the main issues with the game to be honest. While it tries to mix things up by making variations on the enemies, such as ones that throw electricity or fireballs instead of small blades, it still kind of rings hollow. Remember that small melee creature you fought in the first few levels? It comes back later on as a slightly bigger one with more health that does more damage. Woohoo? Not quite.

The only real variety comes in with the giant brutes, the Tentacles and the Monoliths. The brutes are hard as hell, mixing powerful ranged attacks with devastating melee attacks, and you'll need to fight them smart or they will shred you. Sadly even if you fight as smart as possible these guys have the audacity to suicide bomb you... it's both insulting and aggravating way to die. Luckily the Tentacles and Monoliths are much more fun, consisting of you unloading ammo like mad as you try to take down these tough enemies before the regular creatures manage to wear you down. It can be pretty exciting and it's almost always tense.

Spicing the game up is the ever present arsenal. Very few weapons return from Red Faction: Guerilla giving plenty of space for new weapons of destruction. Oh sure, the Sledgehammer returns as do staples like the assault rifle and a rocket launcher (although it works differently than the one in RF:G). The Nanorifle even returns as a late game treat and a variation on the Remote Charges and Singularity Bombs pop up. But from there you have a shotgun, two different dual wielded pistols and awesome plasma cannon that obliterates everything caught up in its large explosive radius. Knowing what to carry on you for every situation and being prepared for anything is important to survive this game. We personally prefer carrying a bunch of explosives to cause as much destruction to enemies and environments as we can.

But for whatever your weapons can't do, your special abilities can make up for. With the Nanoforge on his arm, Darius can use it for far more than his grandfather did. With one button you can fix environments that you have destroyed by accident (or more likely not so accident). On top of that Darius gains the Impact ability, a devastating wave of Nano-energy that obliterates environments, sends enemies flying and possibly kills them. Using upgrades you can even make Darius stronger and faster, give him a protective barrier or "telekinetically" lift and kill enemies. These abilities, while few, are more than enough to handle most situations that come up in the title.

If all that wasn't enough for you then there are a variety of vehicles that you will pilot at set points throughout the game. The L.E.O. exosuit is one that has been given a lot of attention in the media but there is a type of tank that you will pilot twice through the story and even a more awesome treat that comes late in the game. Here's a hint: the Descent games. These segments give you a great chance to just absolutely tear through the enemies in your way and have a blast blowing up everything in sight.

All of this is held together by the game engine that Armageddon is using and this beast does a fantastic job. All of the character models look fantastic, finely detailed and with very good lip-syncing with the excellent voice work. But really, forget how detailed the character models are or how finely detailed the sometimes too dark environments are. No, it's the explosions that are the most lovingly crafted and they are exquisite. The roiling blue "flames" of plasma, the orange glory from a rocket launcher or the menacing purple and black glow of a Singularity blast... oh yes there is quite a lot of graphical power behind these.

As mentioned before the voice work in Red Faction Armageddon is quite the treat as well. All of the characters sound quite good with the potential exception of Hale. His voice actor seems like he's supposed to be going for quiet menace but it really sounds more like bored, disinterest. Even then he gets redeemed during a boss fight where he raves and rants like the lunatic he is. Music is used in an interesting way as its mostly quiet subdued. It helps to set the mood but is so subtle and understated that you will most likely not even notice it.

Honestly if not for some minor complaints Red Faction Armageddon would be a damn near perfect game. As it is, this is a strong contender for best game of the year for its fantastic mix of intense action, fun character customization that changes how you play the game, great graphics and all around fantastic gameplay experience. Even the minor flaws are easily ignored and most will likely not even notice them, as wrapped up in the game as they will be.

As of time of this writing we were unable to try out the Ruin mode or get any good games of Infestation Mode in. This review will be updated with impressions in the future although the review score is unlikely to change due to these modes.