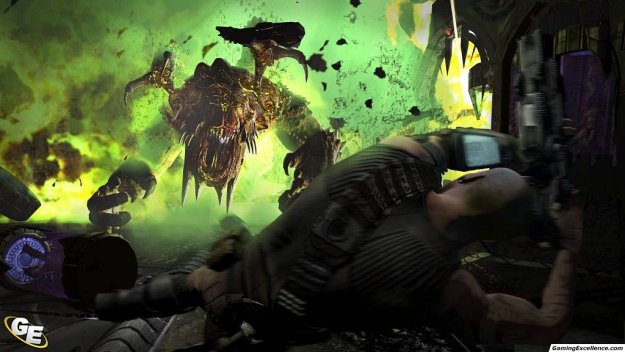 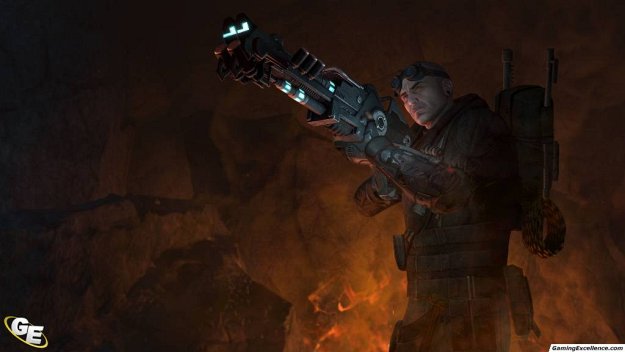 Anyone who played Red Faction Guerilla and got into it has likely been following every single drop of information released about Armageddon so far. This year at E3 we learned a little more about the title but it wasn't much that hadn't already been announced in press releases. However seeing it in motion was almost a religious experience for the inner fan boy in us at GamingExcellence.

Red Faction Armageddon takes place fifty years after the events of Guerilla. After many years of peace and quiet on war ridden Mars everything goes to utter hell. First the massive terraforming device that gave red planet a habitable atmosphere was sabotaged, turning the surface into a hellish nightmare. This causes the civilization to retreat to the underground tunnels honeycombing the planet. Your hero, Darius Mason, is then tricked into opening up an abandoned tunnel, releasing an alien menace hell-bent on destroying everything in its way.

The fundament gameplay is identical to the previous entry in the series but there are a number of changes that will impact the way the game is played. The first major change comes from the Nano-Accelerator, a device based upon the Nano-Forge from the first game. Worn on Darius' arm he can use this to create more ammo for his weapons or to even recreate cover that was previously destroyed. So it's possible for you to blow up an enemy and his cover and then recreate the cover for your own purposes.

Considering just one of the new weapons, the Magnet Gun, it's pretty easy to see how this could be useful. Said gun consists of firing a pair of incredibly powerful magnets at two targets. Once they're both attached to targets they will pull one target towards the other creating all sorts of interesting combat and demolition prospects for this weapon. Yanking large metal crates to slam through cover and the enemies behind it or pulling down pieces of building on top of your foes.

You're going to need your entire arsenal of abilities to fend off the alien menace running roughshod over Mars. These things infest entire caverns, taking over the buildings and producing more and more of these creatures. Darius needs to get in there, destroy the building that acts as the "nest" for a group of these things and then clear the location. In the demo we saw at E3 this was done so that a convoy could get through but we're sure it's going to come up pretty often in the game.

There are many details about Red Faction Armageddon that are still somewhat up in the air. Whether the game even remains as an open world title or trades that in for a more focused, linear experience are currently unknown. But we have a long while before the expected March 2011 release date to find out.