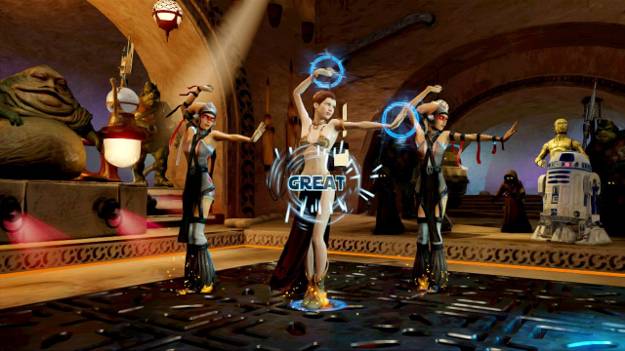 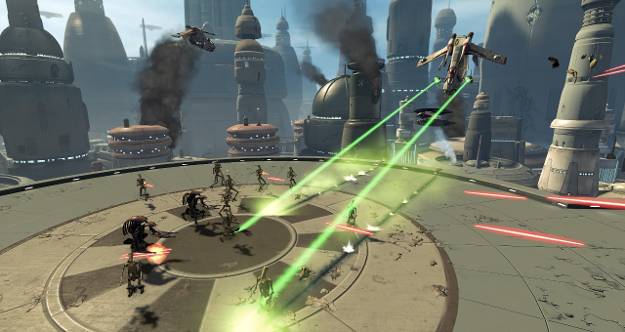 In retrospect, it was truly a recipe for disaster. Hosting a gaming event (in this case X'11) on one of the hottest days of the year, fill it with nerds both in and out of shape, and fill the halls with the next wave of motion controlled titles for Microsoft's controllerless Kinect sensor. Despite the fact that the hall at Toronto's Exhibition Place was pretty ripe in the waning hours of the event, we here at GamingExcellence left pleasantly surprised at the quality and quantity of compelling Kinect titles on display, not the least of which was the much maligned Kinect Star Wars.

Put the critical ravaging of the title from E3 out of your mind, because it's obvious that a lot of work has gone into the X'11 build as opposed to the laggy mess that was playable at E3. Like most Kinect titles, a slice of lag was certainly present and noticeable, but the game was very playable, and dare I say it, oodles of fun to play.

The demo at the X'11 build had three different levels to choose from. The first was a two player mode that was very similar to the one showed at E3. You and a friend are simply playing as Jedi, running through what appears to be the rooftops of Naboo, the political planet that was featured prominently in the prequel trilogy. Controls were simple, but took a few minutes to get used to. The right hand controls your lightsaber, which is simply wielded by waving your arms around in the desired direction. Time it right and you can slice enemies in half or even bounce back laser blasts. The left hand controls the force. Simply move your hand over an enemy or obstacle, and it will float up with the majesty of the force. Flick your wrist in a given direction to send the object flying in that direction. It's simple and very satisfying.

We did get a little tripped up when it came to navigation, but once you get used to the intricacies of it, it functions quite well. By leaning forward, you'll dash towards the closest enemy, and you can somersault over them to get in a quick back strike. The only issues we really encountered were in the turning, which involves you turning your shoulders in the proper direction. It was far too twitchy for the precise gameplay, but we made do once we got used to it. The system also refused to dash unless we were in the perfect body position too, which resulted in a few deaths.

The second level we played was a pod-racing level, which was much more responsive and fun to play, not that the Jedi level wasn't fun either. The set up is simple. You place your hands up at shoulder height, just like Anakin does in the first movie. You push forward to get a speed boost and pull back to brake. Steering was self explanatory. Our demo had a pilot assist mode on, which made our pod navigate a green line, much like a railroad, but requiring more steering input. Experienced players will be able to turn it off in the full version.

The third and most fun level to play was the Rancor Challenge. All you do in this mode is control a Rancor running loose on the streets of Tattooine. By stomping your feet, flailing you arms, and making arm circles, you run around causing as much destruction as possible to get a high score. Meanwhile, the empire's storm troopers are sending their finest to try and take you down in the meantime. The best part was picking up individual storm troopers and flinging them across the landscape. Playing "Godzilla" has honestly never been such fun.

Graphically speaking, the game can't compete with the Xbox 360's heavy hitters, but with all the code undoubtedly firing back and forth between the sensor and the console in order to accurately measure a full body, it's excusable that the game pretty much looks like an HD Wii title.

All of the modes were great to play in a 15 minute hands-on, but it remains to be seen if the controls and mechanics remain compelling over the course of an entire campaign. Will it stay entertaining throughout? Or will this game provide a meagre hour or two of entertainment before its tricks wear thin? I suppose it depends on how big a Star Wars fan you are and how much physical endurance you have. You can find our for sure when the game hits shelves this winter.