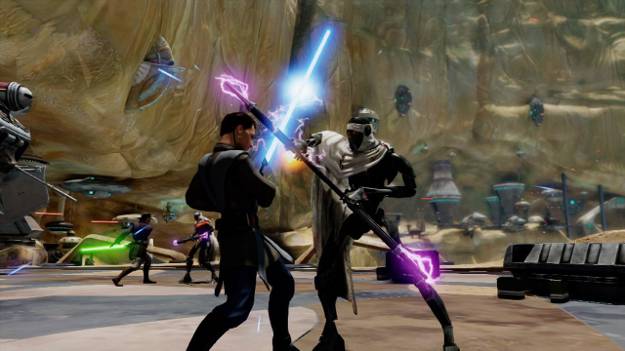 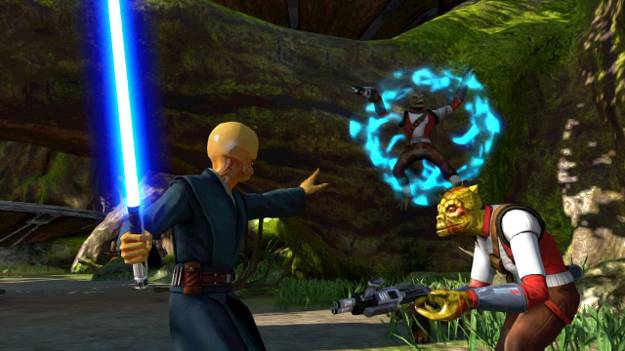 Announced back at the same time that the Kinect (then known as Project Natal), was revealed, it seems like a match made in heaven. A completely controller free motion controlled system that allows you to use the force, swing a lightsaber around and explore a galaxy far, far away? How could it miss?

Well, it was obvious that the game was on rails from the first trailer, and then came several lousy demonstrations across two E3s and countless events since. It looked like our dreams of controlling the force for ourselves in our living room would be dashed before the title even arrived. However, it seems that all the doom and gloom predictions were premature. Wouldn't you know it? Kinect Star Wars is not only fun, it's probably the best put together and polished title available for the Kinect, outside of perhaps the Dance Central series.

It bears mentioning that KSW does not escape the cold hard fact that the Kinect hardware on its whole is flawed. No matter which mode you play, lag will rear its ugly head, accuracy in replicating your motions is sometimes spotty, and at least in my case, the camera will completely lose sight of you. Considering I've experienced these problems in almost every Kinect game so far, I can't blame the developers on that one. 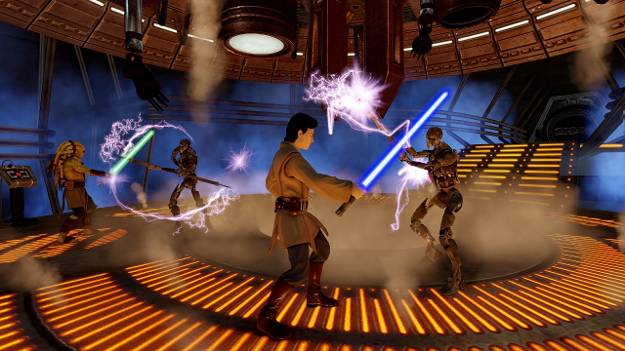 In my experience with Kinect games, most are built around a singular gimmick to build a short and disappointing gaming experience around. Even the sublime Child of Eden was a little gimmicky and over in about 2 hours. In a very pleasant surprise, KSW comes packed with a variety of modes, all of which work well and are fun to play.

Most of your time will likely be spent in the game's campaign mode. In this mode you'll steer vehicles, man turrets, swing lightsabers, wield the force (which is probably the slowest and most inaccurate of all the actions), jump through platforming sections, and fight countless enemies. The entire affair is obviously on rails, but the crazy action set pieces (taken from the new trilogy instead of the originals), varied environments, and variety of play will keep you interested for the mode's three or so hour running time. The majority of the time you'll be jumping and sliding from enemy to enemy, swinging your lightsaber and force pushing them out of your way. What was surprising to me is that despite the repetitive nature of the game, it never got old, and best of all, just when you're getting bored of slashing up robots, the game will mix it up by giving you a one on one lightsaber duel or a turret sequence to keep things fresh. In a nice touch, a second player can jump in and out as easily as just walking into the Kinect's field of view.

Just don't go into the campaign expecting a compelling narrative. There simply isn't one. What little story there is here is simply a vehicle to take the player from one set piece to the next. What makes things worse is that there are constant secondary characters on the sidelines spouting idiotic one-liners that would make Jar Jar Binks cringe. When you hit a wall and have to repeat a section a few times, your ear drums will beg for mercy after hearing the same moronic dialogue over and over again.

The first mode I tried was the saber duels mode, which puts you and/or a friend up against a single enemy and the clock. The battles have you shifting from defence to offense. While on defense, you have to read your opponents' telegraphed attacks and block accordingly with your lightsaber. Then a clash takes place, if the player wins the clash, they'll have their chance to flail their lightsaber around to deal damage. A smattering of unlockable enemies adds longevity to the mode, but you'll probably best Darth Vader in less than an hour. 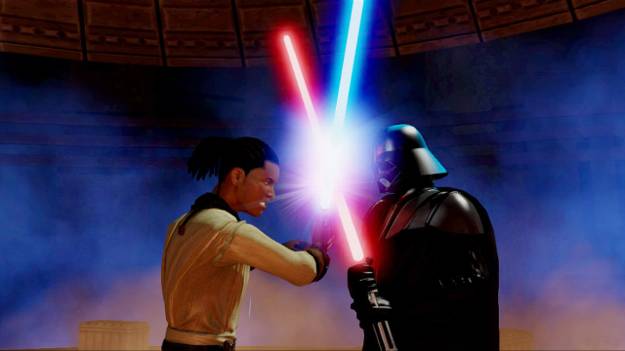 The next mode I tried out was pod-racing, which I initially hated, but came to really appreciate once I worked out the over-sensitive controls. You can enter a quick race or play a short campaign over a handful of tracks. The tracks are littered with clever obstacles, the frame rate stays high, and the rubber band AI ensures that you're never too far out of a race, but can never dominate either. Take it for what it is. If the idea of motion controlled pod racing sounds appealing to you, then you're going to love this. I personally had a good time with this mode.

If you're getting frustrated at this point, then you should check out the Rancor Rampage mode. It's just you (as the Rancor) up against the clock destroying a neighbourhood in Tattooine. All you have to do is literally stomp your feet to move forward and move your arms in the proper motions to smash buildings and toss debris or even residents and storm troopers. It's not very deep, but it sure is satisfying. Like all the modes, kids will love this one too.

I completely sucked at the last mode, but I can't hold my lack of rhythm against it. Yes, KSW has a dance mode too. Considering the Star Wars licence has had little shame since 1983, it should really come as no surprise that the game includes a mode where two players can shake their groove things as Han Solo and Lando Calrissian. The dance moves are appropriately silly, and in a nice touch, uses modern music with tweaked lyrics to give the proceedings an actual Star Wars theme. It's every bit as stupid as it sounds, but it could also very well be the hit of your next party.

In terms of visuals, KSW isn't bad, but not great. The frame rate stays smooth about 90 per cent of the time, occasionally slowing to a crawl during the campaign's hairiest moments. Textures and animations lack fine tuning and detail. The engine does handle dozens of enemies at once quite well without dropping too many frames, and the best set pieces and explosions all look great.

Infuriatingly bad voice acting and dialogue aside, KSW sounds the part too. The hum or a lightsaber, screech of a blaster shot, and scream of passing space fighters hold just as much awe today as they did in 1977. Considering the hectic nature of the game, the mostly great sound design holds up its end of the bargain nicely.

So in the end, Kinect Star Wars is not exactly an earth shattering game release that will be remembered for generations to come. What it is though, is a shockingly fun time that not only holds more replay value than expected out of a Kinect title, but one that should appeal to both the young and young at heart. If nothing else, the Star Wars licence has certainly been treated way worse than it has here. If you're looking for a fun way to dust off that Kinect, give this experience a try. With no controller to worry about, the force will already be with you.