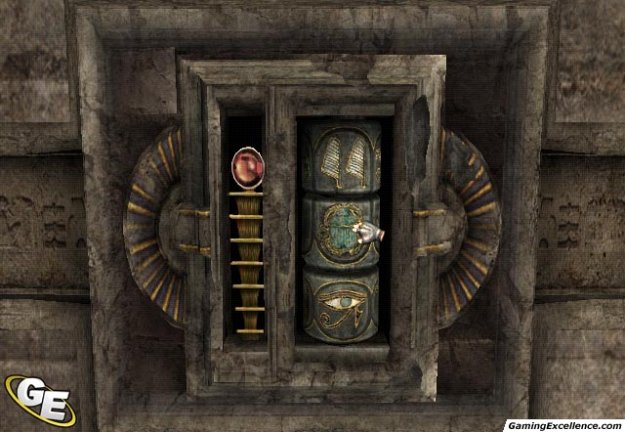 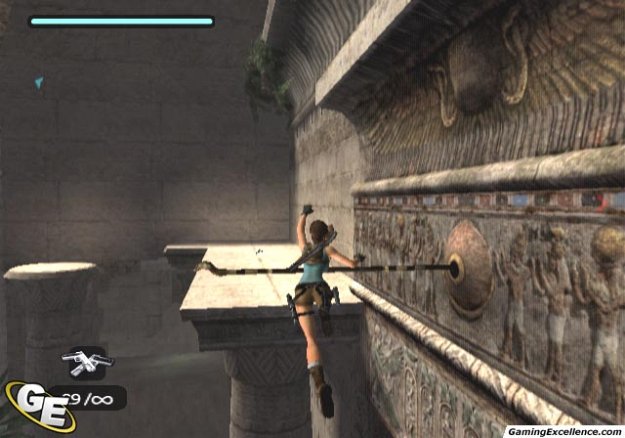 A few months ago when I reviewed Tomb Raider Anniversary, I thought it was a superb example of how to remake a classic game. The graphics were great, the controls solid, the storyline improved, and the game immersive. Since the game proved popular enough on the PS2 and the PC when it first came out, it was only a matter of time until Crystal Dynamics would begin distributing the game on every other system known to man. Now it's arrived on the Wii, and we're disappointed to announce that nearly every facet of the game has suffered in the translation.

The game begins in snowy Tibet, as Lara has been tasked with tracking down a mystical artifact known as the Scion. The Scion is broken up into three pieces that will have you scouring some of the most remote places on earth to find them. Along the way, you'll have to navigate some lethal tombs and environments, in addition to rival Tomb Raiders and a variety of enemies such as dinosaurs, bears, lions, bats, rats, and other enemies that PETA would love to know about Lara slaughtering.

The game consists of four main Tombs that are split up into smaller sections. Don't worry about there only being four, as these tombs are absolutely titanic. Getting from the entrance to the Scion piece in each one will take several hours each. There are some individual rooms within these tombs that will take hours upon themselves to solve. This is definitely not a game for the impatient. Rather, it is a slow paced, pensive game with a focus on exploration and discovery, rather than blasting everything you see. The Wii version also includes a few small, new sections that don't add a whole lot to the experience.

Exploring the tombs on the PS2 and PC was a snap thanks to the streamlined controls that allow you to do what you want to do 90% percent of the time. Unfortunately, the game was not designed with Wii controls in mind, and boy does it show. The analog stick on the nunchuck feels uncharacteristically unresponsive and makes lining up your jumps a huge chore. Jumping in a straight line is so much harder than it should ever be, and makes even the easiest jumps an exercise in frustration. Furthermore, instead of pushing a button to launch the grappling hook, you must shake the nunchuck, which only seems to work every two out of three times. Also, who wants to roll Lara by pushing down on a D-Pad? Aside from those hiccups, the exploration portions essentially controls as well as the other versions, but why put up with those annoyances at all?

The Wii version also introduces the flashlight that was sorely lacking in the other versions. This is one place where the new controls shine, no pun intended. Wherever you point the remote is where Lara shines the light. By twisting the remote with your wrist you can even adjust the focus of the beam.

You're going to die in this game; a lot. The level design is absolutely punishing in some places. There are environmental puzzles that are as deadly as they are intricate, and managing to solve them is a rewarding experience. Solutions to puzzles are occasionally quite obscure, although in retrospect you'll probably slap yourself on the forehead for not figuring out the solution earlier. However, I encountered on at least two occasions that I had the puzzle all figured out, but the solution simply wouldn't register. I therefore wasted upwards of an hour or two running around the tomb looking for another solution to a puzzle that I had actually already solved, but wasn't aware of it. But this also was a rare occurrence. Just remember this while you're playing; If you're certain about a solution of a puzzle, don't be so quick to disregard it simply because it doesn't register. Keep forcing that block onto that stream of water, and eventually it will work.

The game's outstanding physics engine also makes way for some creative and new solutions to certain puzzles. For example, knocking out wooden planks on one level will cause a pillar in the upper level to collapse, therefore changing around the entire make up of the tomb. Environmental objects such as boulders, water, wooden suspension bridges, ropes, and pendulums all react almost exactly how you would expect them to in the real world. The amount of effort that Crystal Dynamics has put into the physics engine really shines through, and they should be applauded for it.

Of course, Lara Croft wouldn't be Lara if she wasn't wielding her dual pistols, kicking ass and taking names. Unfortunately, combat has even more issues on the Wii than before. Instead of auto aim like in every previous title, the Wii version demands that you lock on to your enemies, and then aim with the remote to shoot. It's an annoying mechanic that essentially demands that you aim, dodge, and lock on all at once. Combat in this game has essentially gone from mildly amusing filler to frustrating annoyance. There's also a few Resident Evil 4 style cut-scenes in which you have to press the corresponding button or arm motion on the screen quickly in time to survive Lara's current situation.

Graphically speaking, Tomb Raider Anniversary is solid, but clearly inferior to even the PS2 version. Textures are blurrier, but at least the tombs are riddled with lots of little details throughout the environment. The framerate is also noticeably choppier than in the PS2 version. Lara herself is still beautifully rendered, and comes with hundreds of different animations, all of which are smooth and convincing. You'll even notice that when you exit a pool of water, beads of water are covering her face, skin, and outfit. It is little touches like this that make Tomb Raider very appealing to look at. Each Tomb also has a distinct look and feel to it, which helps combat the monotony of constant exploration. On the plus side, the Wii version fixes that pesky blurry text issue on HDTVs from the PS2 version.

The audio in the game also plays a big part in creating a solitary atmosphere. There's rarely any music, and Lara's gunshots satisfyingly echo in the large rooms. It also bears mention that the voice actress who portrays Lara has got the character down pat, and does a superb job. It's rare in video games that you can actually detect nuance in the voice acting, but Keeley Hawes gives a confident and convincing performance. Everything else sounds like it should, such as footsteps and crumbling boulders. The game made occasional use of the surround speakers, but since the game is so quiet anyway, it does become a little irrelevant. For the entirety of the game, it's just you and Lara, and the sparse sound effects in large part help to create that solitary atmosphere.

Tomb Raider Anniversary is still a great game. However, the Wii version is by far the worst version of that great game. If you only own a Wii, then you'd still do well to check this game out, but Tomb Raider was designed to be played with a controller, and all the arm waggling in the world won't change that fact.