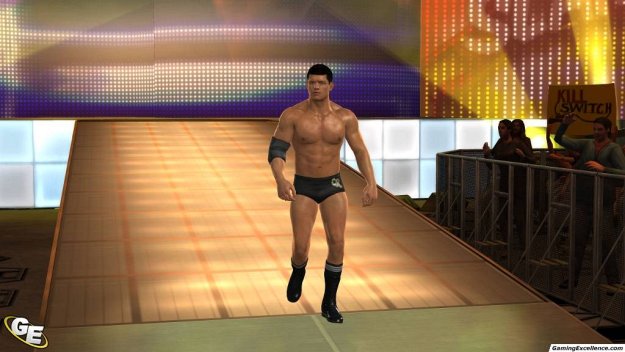 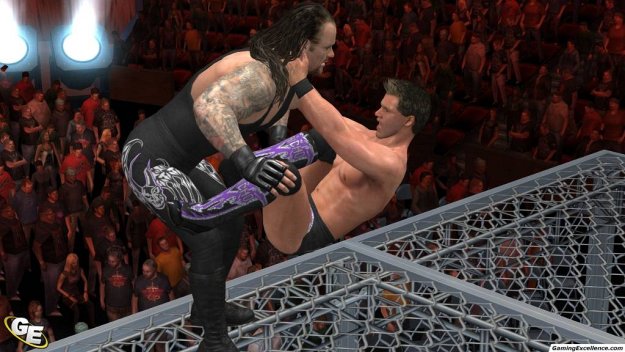 The day before wrestling's biggest superstars hit the apron for the Hell in the Cell pay per view in Dallas Texas, we were lucky enough to fight a few matches of our own with the final build of WWE Smackdown vs. RAW 2011 and came away quite excited to jump into the ring with several of the new features on both the single player and online portions of the title. Today, we take a look at what's new and exciting for the offline crowd.

As far as gameplay goes, the game has been simplified while retaining the depth that the hardcore crowd craves. Gone this year is the grapple modifier, replaced with a simple system of moving the right analog stick in different directions to commit different grapples and moves. Everything is contextual as always, so a grapple on the turnbuckle will be different than one in the middle of the apron. Reversals are a matter of pressing either the A button or the right trigger in proper time with the move being attempted. By holding the left trigger, you can drag your opponent where ever you like within the ring.

The right analog stick system works great because the directions that you move the stick are usually contextually based on what direction you want to move your opponent. For example, if your opponent is down, pressing up will pick them up off the mat. Steering moves with the left stick feels natural and elegant as well. A nice new addition is also that moves that end in pins are now modifiable. If you're using a character with a suplex pin, your wrestler will only execute the pin if you press the B button during the move, giving players more options without expanding the move set. Overall, the control scheme was a welcome return to the simpler Smackdown games of yore like Shut your Mouth on the PlayStation 2.

Also new is a brand new animation system that has no noticeable clipping problems, and seems to finally get rid of the awkward animation transitions and bizarre motions that have plagued previous entries in the series. The game finally looks like a real wrestling match is going on thanks to this little change.

The biggest new addition to the franchise is WWE Universe, which institutes some clever AI and a staggering amount of customisability. The gist of Universe is that no matter what mode you're playing, the game will keep track of what superstars you use most, what storylines you like to follow, and which opponents you like to play against. The game will then take that data and create unique storylines and matches for you to play through. The mode will actually have evolving storylines as you go through it, and include a full calendar from event to event.

The best part about this mode is that if you don't like the matchups or tendencies that the AI is including, you can easily go into a very well designed menu system and change anything you like. Don't want to have the Undertaker feuding with Shawn Michaels? Go into Undertaker's profile and make Michaels his friend. Want the main event at Wrestlemania to be The Miz versus Sheamus in an inferno match? Go ahead and edit the card to your heart's content. The mode never ends and can be played for more in game years than these wrestlers will spend on planet Earth.

The other main mode is Road to WrestleMania, which is an expansion of the standard story modes that have been in the franchise since its inception. This time around, you're given a fully 3D environment to navigate with the superstar or created character of your choice. Much like a simplified RPG, you can do little side jobs and quests to improve your relations or rivalries with other wrestlers, and gain points to upgrade your character. In the demo we saw, the first quest was helping some clueless Divas put out a fire with a fire extinguisher that was conveniently located 10 feet away. The dialogue was campy and cheesy, but also within the silly spirit of any WWE event.

Creation and user customizability has been upped to a nearly overwhelming level this year, which makes the elegant and simple menu system a god send. Various modes allow you to create your own storylines, cutscenes, superstars, moves, and pretty much anything else you can think of.

The game features 60-70 different match types, but with the new match creator system, the number is really only limited by the player's imagination. Before a match, players can change any number of modifiers from time limits, victory conditions, how fast momentum swings, extras like weapons or cages, and how the rules will be enforced. Players can then save these changes as permanent for any specific match type, or save their own matches to play and share with friends.

The game also features 70 wrestlers to choose from, plus 50 slots to create your own characters or favourite wrestlers from the past. More are promised through DLC as well. One entrepreneuring journalist managed to create Street Fighter's Guile in only a few minutes.

Check back soon when we check out the new online and multiplayer features of Smackdown vs. RAW 2011, there's more cool stuff that the developers have included this year that you won't want to miss!