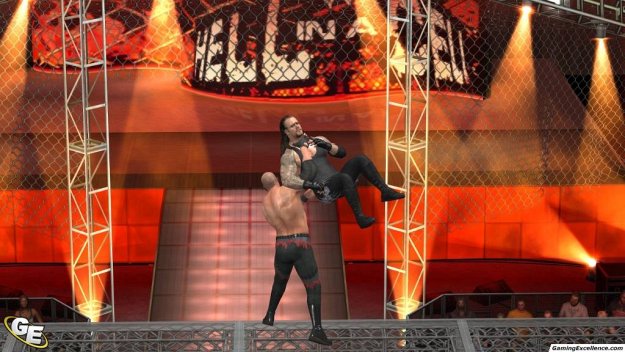 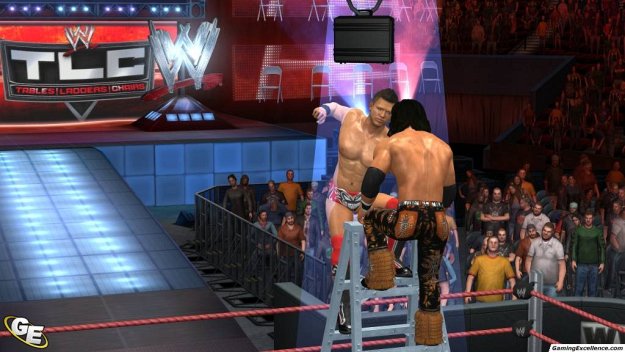 It's now been over ten years since the first Smackdown vs. RAW was first released. The wrestling series has consistently provided enjoyable WWE action to fans over the years, with tons of customization and modes to keep them busy until the next iteration came out. This year's Smackdown vs. RAW 2011 certainly shows that the series is over a decade old, but not in a good way. A plethora of problems that have been in pretty much every SvR game, as well as a lack of enjoyable new features, makes this year's edition a disappointment.

SvR 2011's core gameplay mechanics are nearly identical to last year's game. Actions like punching, picking up weapons, and pinning are controlled through the face buttons, and grappling is handled exclusively with the right thumbstick. If you've played any wrestling game in the past few years, then you could jump into SvR 2011 right away and start punishing opponents. Unfortunately, since nothing was changed from last year, all of the annoyances are back as well. As soon as three or more opponents enter the ring, targeting becomes a nightmare. Countering is still off, which is undeniably frustrating. There are also some collision detection problems, and the frame rate stutters at times, especially right at the beginning of a match. Most of these issues have been in SvR games for years, and I'm amazed that Yuke's, the game's developer, hasn't gotten rid of them by now.

Road to Wrestlemania returns this year, offering five distinct storylines to play through. John Cena, Christian, Rey Mysterio, and Chris Jericho are the four headliners in this mode, with the fifth storyline focusing on taking down the Undertaker, who has never lost a match at Wrestlemania. Unfortunately, the storylines are fairly short and predictable. Perhaps the biggest addition to this year's game is the ability to go backstage with your superstar before a match. Here you can visit the trainer to increase your abilities, interact with other superstars, and advance the story in-between matches. It's a cool idea, but it's implemented horribly. The backstage area itself looks ugly and empty, and only contains about four rooms. The camera angles are atrocious, especially when talking with someone. And matches backstage are repetitive and boring. I enjoyed last year's Road to Wrestlemania much more than this year's simply because I didn't have to go through this backstage area before every single match.

A new single player mode in SvR 2011 is WWE Universe, which is kind of a combination of last year's Career mode and Exhibition mode. You're given a weekly schedule of events in the WWE with preset matches (or you can make your own matches) and you can either play or simulate them. As you progress, the game will make rivalries based on the matches taking place, and will include cutscenes and events to make it seem like you're watching wrestling on TV. The mode certainly has potential, but it would almost benefit from a little more structure. For example, it's far too easy to make your created superstar (or anyone you like, for that matter) obtain each and every title belt.

But what really makes the WWE Universe mode work well is the vast amount of match types available in SvR 2011. There is an insane amount of match types in this year's game, everything from an Inferno Match, to a TLC match, to a Hell in a Cell Tornado Tag Match. And if those aren't enough, SvR 2011 introduces a match creator for you to come up with your own rules. The game also brings back the highly enjoyable story design mode from last year, with a few new bells and whistles. Creating your own storyline featuring your own match type is really cool, and having the ability to upload it online so your friends can play it is even better.

The online portion of SvR 2011 is solid. Like last year, downloading other people's created stories and superstars is fun, and adds replay value. New game modes are available online this time around as well, such as the 30-man Royal Rumble. However only 12 people can participate in the Royal Rumble, with the rest being AI controlled. It would be cool to have 30 real people playing, but even with 11 other people, I had trouble finding games that weren't riddled with lag.

Aesthetically, SvR 2011 hasn't improved over its predecessor. The graphics are the exact same, and although the superstars look good in the ring, the crowd and environments still look ugly. Animations look choppy at times, and the new physics engine isn't anything special. The sound design is one of the game's weakest points. The sound effects are pathetic sounding, and the backstage segments are void of any music whatsoever – just dead silence. The commentary is bland and repetitive, and although actual WWE superstars provide the voice acting throughout the game, it's not very good. This is definitely a game you want to play while listening to your own music.

Aside from the WWE Universe and pitiful backstage portions of Road to Wrestlemania, SvR 2011 just doesn't add much from last year's game. The creation tools available and amount of customization are still great, but the fact that the core gameplay hasn't been improved upon in years really shows in this game. Not only that, but Yuke's failed to even address the issues that have plagued the game for years! The old adage "if it ain't broke, don't fix it" is often applied to long-running franchises, but not here. Smackdown vs. RAW could use some fixing.