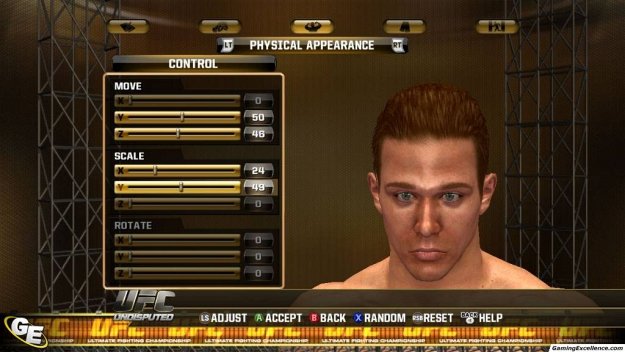 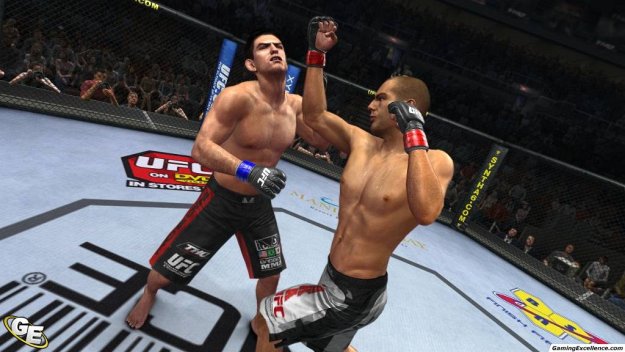 It's no secret that in recent years, video games have essentially been split into two camps: Casual and hardcore. In no other genre is this more apparent than in sports games. Sports games generally act as total fan service, giving fans of a sport the most in depth possible simulation of the sport, both on the playing surface and within board rooms, gyms, and the concession stand. The other side of the coin is the easy going, simple representation of sports like NBA Jam and Tecmo Super Bowl.

UFC Undisputed 2010 falls strictly into the former camp. This game is a deceptive time sink, pushing gamers into a digital representation of the life of a UFC fighter. It's a good thing the game play is rock solid and the options are plentiful, because this is not a game that you would be able to invite a few casual fans over and have fun with.

When you're in the octagon, UFC 2010 utilizes an incredibly complex control scheme that is likely more technical than any other fighting or sports game to date. The game uses every single button on the controller and both analog sticks with reckless aplomb. I actually found myself moving the analog sticks with my thumbs while pressing face buttons with my index fingers.

In simplest terms, the control scheme is close to something like Tekken. You can move around the octagon freely with the left analog stick, and strikes from each limb are mapped to their own face button. The left triggers modify the height of your punches and kicks, and the right triggers allow you to block low and high. Things get really complicated when you throw in features like the sway system, the clinch system, the ground system, the standing system, in addition to other factors like fatigue, injuries, and the overall conditioning and skills ratings of your fighter.

The sway system is pretty neat actually. By holding down one of the right triggers, you can actually weave and bob like a boxer to avoid incoming strikes from your opponent. Of course, since professional fighters do a good job of not telegraphic their attacks, it takes a really keen eye and lightning reflexes to pull it off.

The clinch and ground systems are really complex, and will have casual fans cursing their consoles. You can clinch (essentially hug) your opponent with a push of the right analog stick, and block their clinch attempts from doing the same by pressing away on the stick. Once you're clinched together with your opponent, it's a constant struggle for the advantageous position, which you can achieve with a various quarter circle motions on the right stick. If you don't keep a close eye on your position, you'll find your limbs pinned down, unable to fight back. It's the same thing on the ground, with both fighters constantly blocking and making quarter circle motions to get the best position to show the other fighter their fine menu selections of knuckle sandwiches.

Also, when you're in advantageous position, you can do submission moves with a click of the right analog stick. Whichever player rotates the right stick faster will either break or succeed in the submission.

After a few hours of play, I was able to keep up for the most part, but the ultra complex controls put up a total brick wall for any casual fans. Anyone who tries to play the game without going through the hour or so worth of tutorials will find themselves eating canvas like it was filet mignon at an all-you-can-eat buffet.

In my first hour with the game, I was getting frustrated at the controls and all the techniques to keep straight. After powering through that, I found the game to be loads of fun. The career mode in particular, has that indefinable addictive quality that will have you fighting a dozen "just one more" matches into the wee hours of the night.

I started right off the bat within career mode, which is incredibly in depth and gives you loads of things to do and goals to accomplish with your own created fighter. Career mode sees the player moving up the ranks as an amateur, into the WFA, all the way up to the UFC championship in your weight class. Unfortunately, trying to get a grip on the controls while learning the intricacies of the career mode is not a good way to start. I recommend going through all the tutorials and trying a few of the other modes first before diving headfirst into career mode.

When in career mode, you have to constantly train your fighter, keeping an eye on two dozen stats, while keeping your other eye on training their speed, cardio, and strength training. You also need to make sure you rest your fighter in between training, or you'll get injured, level up stats far slower, and generally get pummeled. Neglect these stats, and you will notice an obvious difference in fighting performance. Stats consistently decay, so the career mode is a huge juggling act. Trying to maintain every single fighting stat is an exercise in frustration, because they seem to decay faster than you can keep them up. Two years into the twelve year career mode, I found myself staring at a ton of zeroes for many of my stats because they simply wasn't enough time to level them all up and maintain them before others started to decay. Once you get your skills up to levels 30, 50, and 70, they'll only decay to that point. Therefore, I found it was far more efficient to focus on one skill at a time, get it to that plateau, before focusing on another. Players are also given the option to actually play through training, or let the CPU handle the actual training part. It's a neat risk reward system, because a great performance in training will yield more points, but if you get your ass kicked, you've essentially wasted a week of training. Most players will likely let the CPU handle things. You can also do camp invites, which allow you to learn new special moves for your fighters, but doing these camps tires out your fighter and gives you one less week to boost your stats.

You'll also have to do things like manage sponsors, hire new coaching staff to raise level caps (which are earned through CRED points by fighting and winning matches), check your email, talk to your coach to find out what to do next, maintain rivalries and relationships with other fighters, and scout out opponents. Fortunately, the menus are very well designed, intuitive, and easy to navigate. Well, they are once you figure out what all those charts, numbers, and text mean.

For single and couch multi-players, there's a smattering of other modes to keep you busy too. There's simple exhibition and tournament modes for getting into a quick bout, which is probably where you should start to get a grip on the controls. Title mode has you playing as any fighter and moving up a ladder much like any other fighting game. Once you win the title, you can play Title Defence mode. You'll take on twelve fighters who all want your title, and you'll earn points for unlockables with each victory. Finally, in the biggest form of fan service, there's an Ultimate Fights mode, which recreates some of the most famous fights in UFC history. Through this mode, you can accomplish goals to recreate the fight as it really happened, or change history. You can unlock real fight footage and introductions through this mode as well. PlayStation 3 owners get exclusive bonus fights for this mode as well. With a roster of over 100 UFC fighters, fans on either console will get their fill.

There's one major caveat with the online multiplayer. Every new copy of the game comes with an online redemption code on the back of the manual to access the online features of the game. If you're buying the game used or renting it, you'll have to pay in order to play online. Online brawlers have the option for straight ranked and unranked exhibition matches. Ranked matches feature the standard leaderboards, and the servers are absolutely packed with players as of this writing. You can also create and fight camps (known as clans back in the Quake days, or guilds in World of Warcraft, but those probably sound too geeky for the UFC crowd), and invite your friends to come and fight under your banner.

Graphically speaking, UFC 2010 is simply outstanding. Animations flow together completely flawlessly, whether grappling, transitioning, striking, or even from the fan reactions in the crowd. The number of animations is simply staggering, as even punches up close will look entirely different from punches a step away. The fighters are incredibly detailed and will bruise and bleed in real time both on their bodies and onto the octagon itself. Everything runs at an incredibly smooth frame rate too. The only complaint I had was that the fighters' eyes look lifeless and dull, which gives the faces a weird fake look. You definitely don't notice in the heat of a submission match though.

Audio is very good too. Crowd noise, fight sounds, and ambiance are all exactly as they should be. The commentary by Joe Rogan and Mike Goldberg is likely the best I've heard yet in a sports game. They rarely repeat themselves, keep up with the action very efficiently, and will even bring up anecdotes and events from past fights, and comment on your training regimen with surprising accuracy.

The real question here is whether or not owners of Undisputed 2009 should plonk down the extra cash for the upgrade to this year's version. Casual UFC fans can likely rest easy, knowing that any new additions to this year's version have been tailored exclusively to the hardcore fan. However, given the choice, the sheer fun factor, in depth career mode, excellent online support (that requires a fee if purchased used), and stellar presentation make this the penultimate MMA video game experience, and a must have for any UFC or fighting game aficionados out there.