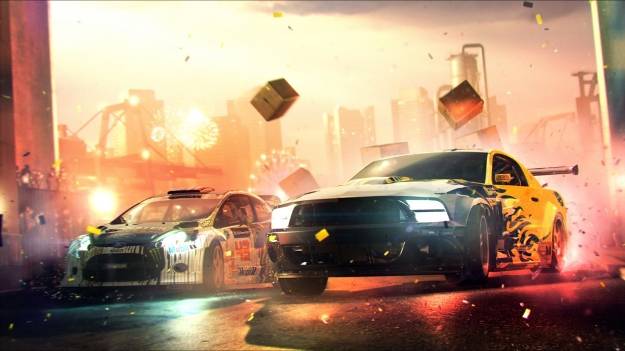 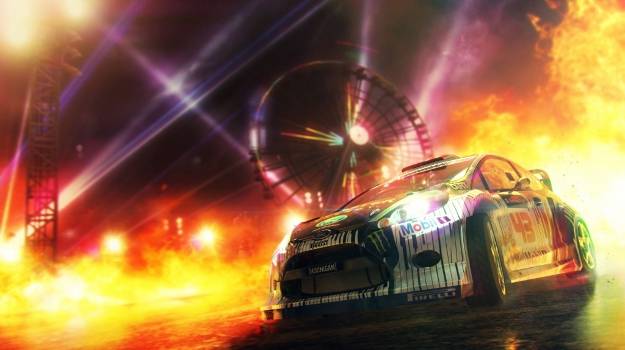 In a purely visceral sense, there's little that's more satisfying than watching two ton a half automobiles crashing into one another. The way that the metal twists and contorts under the impact and pressure of another fast moving object, there's little that can satisfy an action junkie's mind like some vehicular carnage. So what happens when you mix in the rally racing action of Codemasters' popular DiRT franchise with the explosive carnage of a Burnout or even Destruction Derby titles? You get DiRT Showdown, a fun, albeit brief foray into a classy mixture of rally racing and pure automotive destruction.

Most players will jump right into the career mode, a good a place as any to begin. Let me say, the struggle to become the most extreme dude on the destruction/rally circuit is the driving force behind the game's epic narrative. It was under this extreme need for speed that myself and my on screen avatar, Joebob Jingleberry embarked on this epic quest to make the world safe for demolition derbies. The journey was fraught with peril, but with enough perseverance, I was able to become a legend of driving cars head on into each other. All kidding aside, there's no incentive to move forward in the career mode aside from unlocking new cars and races in a variety of locales around the world. 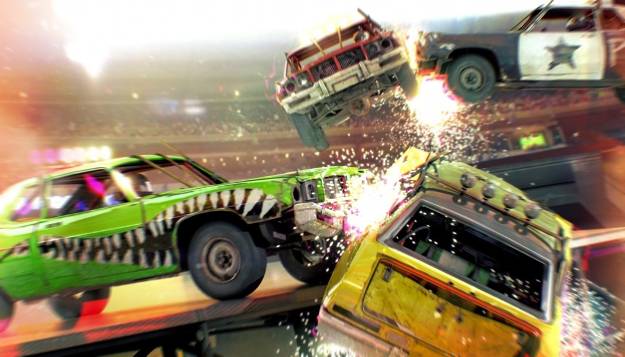 At least there's a good variety of modes to take part in. You can participate in demolition derbies that score you based on eliminations and how hard you hit the competition, an arena based mode that has you pushing other drivers off a platform, figure-8 races that create massive pileups by having multiple directions of traffic come off of each corner, standard races, a trial and error infested mode that has you following a path of smashable on track blocks, elimination races that kick off the last place car every 30 seconds, domination races that crown the winner with the overall best time on various sections of track, and trick attacks that have you drifting and spinning donuts on an open track. Some modes are more fun than others, but the career tree strikes a good balance between events so as to not bore the player with too many similar events. The career mode features 60 events spread across four difficulty levels. Not the longest career mode we've seen, but it doesn't overstay its welcome either.

With the help of some wonderfully easy to master physics, tight controls, and good track layouts, nearly every mode is a blast to play. You'll rarely have to let go of the accelerator while racing, and the brakes are used for little more than initiating drifts. Great for newbies to jump in and play, but the simple gameplay does mean less longevity for the game. A weird thing to mention however, is the fact that there's a handful of licensed cars in the game from manufacturers like Ford and Mitsubishi, but the majority of made up brand names and designs from the developers, much like Criterion used to do with the Burnout titles. It's a lot less exciting to upgrade a knock Hearst than it is to pull out a fully loaded Mitsubishi Lancer. It's also strange that the licensed vehicles are only usable in certain event types. Why aren't the licensed vehicles available in every mode? I suppose it makes sense in the destruction derbies, because a light sedan like the Ford Fiesta would be one of my last choices to take into a metal smashing arena, unless my only other option is a unicycle?

Gearheads may not want to apply to this showdown. Car upgrades are handled in three simple categories of Strength, Handling, and Speed. Upgrades are handled generically within these three categories. Since the cars aren't all licensed, it does become ab it of a guessing game as to which vehicles will best suit your needs. I eventually just upgraded the cars I thought looked the best and forgot about the rest.

CPU AI is rather aggressive, which only makes sense in a destructive racer such as this one. They will actively ram you off the track, cause you to spin out, and will thankfully make driving errors of their own. There's also some definite AI rubber banding going on that means you're never too far out of first place, especially if you've got some left over nitrous boost that replenishes by driving fast.

DiRT Showdown's other main mode is the Joyride mode, which drops you into an open world that opens up by completing missions in the world. Most of these missions are simple things like "do a donut around this pole", or "drift around this corner", or "Make a jump over this fence." As you do these objectives, more challenging areas open up, as do more collectible packages. The mode is fun for a bit, and a total of 150 missions over two maps means there's some good content there, but the lack of story or motivation other than to check off all the items on a to-do list means the mode likely won't hold your attention to the end.

The game also features a slew of multiplayer modes that all tie into Codemasters' new RaceNet service. Similar to EA's autolog, RaceNet moves your experience away from the console and onto your PC or Smartdevice by keeping track of times, friend challenges, and in game rewards. The game's online features are impressive, and even include compatibility with YouTube to upload your best clips directly to your existing YouTube account. After every race, you can challenge anyone on your friends list to beat the time you just posted as well, fostering some wonderful competition. All of the different events in the game are also playable online or in split-screen, and live human competition is the best way to experience the demolition derby events in particular. There's just something satisfying about smashing up your friends' ride instead of a computer controlled game.

The presentation on this showdown is mostly excellent. From the well designed and pleasing to look at menus, to the realistic destruction engine that litters every track with debris, to the lovely environments with impressive weather effects and well modelled cars, Showdown gives off a positive graphical vibe. It may not be as lush and detailed as something like Forza, but having a super smooth frame rate and slightly less detailed cars in an arcade environment was fine by me. The package is rounded off by an incredibly appropriate soundtrack featuring the likes of heavy techno, dance club, and alternative rock tracks really fit the vibe of the game well. An over-enthused announcer who seems to think he's more hilarious than he really is completes the package. I imagine most gamers will shut him up soon, but with goofy lines like "it's like watching two cars driving into each other!! Oh wait... it is...", I got a good chuckle out of his over enthused delivery and thankfully sporadic input. He can be shut up in the options menu if so desired too.

DiRT Showdown may not be the be-all and end-all of racers on either side of the simulation/arcade spectrum, but in the dog days of summer, this game is just what the doctor ordered. A quick blast of destructive racing that you'll likely love every minute of, but won't likely remember much of by this time next year. If you've always thought that the Burnout or Need for Speed titles needed a destruction derby mode, then this is a must play. The rest of us that just want to smash some cars and drive really fast on snowy mountain tracks, this showdown will scratch that itch for you too.