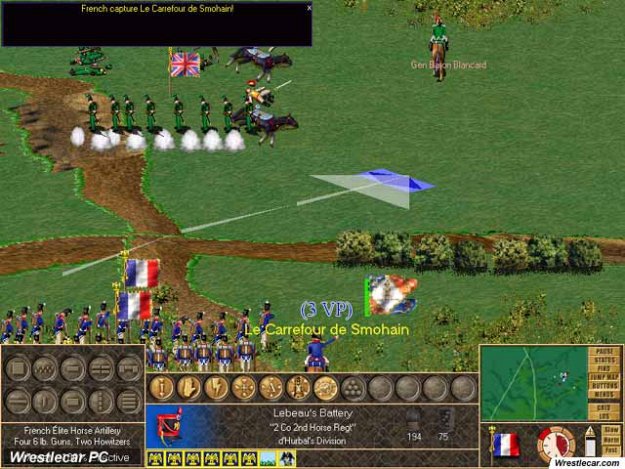 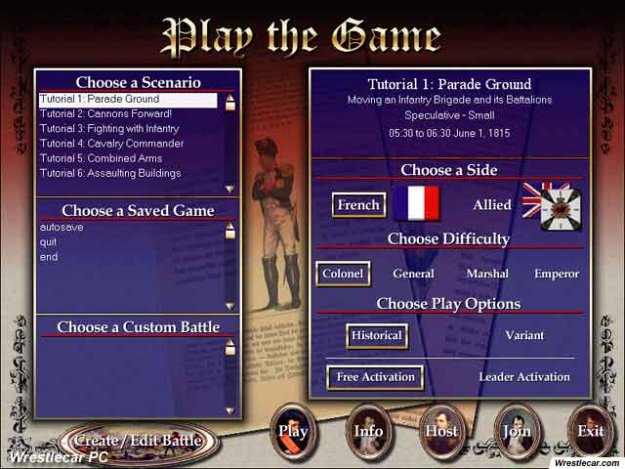 Almost everybody has heard of Napoleon; the French Emperor who became the most powerful dictator in France during the Seventeenth and Eighteenth centuries. Napoleon was a military genius, but in his last battle at Waterloo against the British and Prussian armies he was defeated. Upon defeat, he was exiled on the island St. Helena. If you had never heard of Napoleon before this day, hopefully this little history lesson will give you a brief introduction.

Waterloo: Napoleon's Last Battle (hereon known as WNLB) is a very unique strategy game set in 1815. Very few titles accurately portray the past, especially this era in time. Few games are based around a single a person or event in our history, and that is one thing that makes this title unique. Published by Strategy First and developed by BreakAway Games, Waterloo: Napoleon's Last Battle uses the Antietam game engine, which in itself was originally based off the Gettysburg engine. Although this physics engine is dated, it is still well known by strategy gamers, and comes highly recommended by many people.

Included with this title are six tutorial missions and more than thirty scenarios. Most of these scenarios are historically accurate while others are completely fictional. A huge amount of research went into this title to make it so accurate. Very few games are effective in teaching the player anything, but Waterloo is very different. Before I loaded up the game, I knew a little about Napoleon was and his era, but not very much. After playing and understanding the game, I have a very good understanding of who Napoleon was, and what war was like during this time period.

The manual in WNLB is very detailed and provides a good insight into the game. The in-game tutorials lead the player through some short missions where you will quickly learn the basics of the game and how to accomplish certain goals. The interface is fairly simple to use, and a large compilation of general information about Napoleon and scenario information is a great asset. One problem that is present in the game is the inability to change the resolution of the game screen. Players are forced to run in 800x600 screen resolution, and this can be troublesome at times, especially if you are using a large monitor. Otherwise, the interface has very few problems and is clean and easy to navigate.

Although the game engine is showing its age, there is still a lot left to be squeaked out before it is shelved for good. The game play is very unique compared to other historical real-time strategy titles, and the ability to send brigades of troops into battle with the yell of a commander is something not offered by most games. The game engine is easily learned and maneuvered, and this is one reason why it is preffered among strategy gamers. By selecting a brigade of troops or a commander, you can set formations by clicking the appropriate button at the bottom of the screen. Moving troops is simple, and is completed by selecting a brigade and dragging your mouse cursor across the screen to their final destination. Sending troops into battle is easy as well, as you can insist the battalion charge the enemy by pressing the appropriate button at the bottom of the menu or by using a hotkey. If you are getting slaughtered on the battlefield, it is easy to tell your soldiers to retreat by using a hotkey as well. If your troops are outnumbered, and you do not have a good plan of attack, your troops will turn around and run like cowards, which is a very realistic aspect of the game. The Gettysburg engine is well known for features like these, unfortunately the game would be better if a newer, more modern engine with some features of the Gettysburg engine was developed and used.

The sound in WNLB is quite good, and was much more than I was expecting. Sounds of the commander yelling "charge" as your troops run towards the enemies and the sound of gunfire echoing through the air put the player into a mood of war. This is one of the better aspects of the game, and one of the few really big surprises.

The graphics in WNLB are nothing spectacular and could use some great improvements, but due to the game engine used this is not possible. This is just one area that shows the age of the game engine. Although on the largest zoom level the models look decent, and important figures and commanders stand out from the rest of the troops, in this current day and age of games, graphics are a very important aspect. Many people believe that graphics are the most important area in a title, and if you cannot get past the drab graphics, you will not enjoy the game. It is very true that graphics are an influential aspect of any title, but they should not represent what the game is capable of. For those that do not worry about graphics, only you will realize the magnificent scope and historically accurate strategy title known as Waterloo: Napoleon's Last Battle. 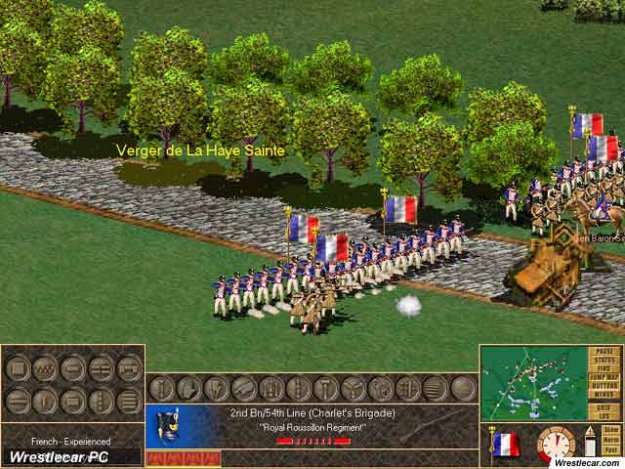 Multiplayer is nothing new in the field of gaming, and it is almost expected that every title include some option of online play. Most people who own a computer have some access to the Internet, and many have broadband, and this shows that many people whom purchase the game would be able to use multiplayer. Fortunately, WNLB includes multiplayer. Unfortunately, it is very difficult to find a game to play online as very few people are online at a single time. Really, a historical real-time strategy game such as this is more suitable for offline play, but for those who would like to venture out on the online battlefield, you should probably arrange a few friends beforehand instead of trying to setup a game on the fly.

To appreciate how much research and work went into Waterloo: Napoleon's Last battle, you must really be a Napoleon fanatic. Very few people realize how difficult it is to research a topic such as this, and then present it in an entertaining, enjoyable manner that is not only understandable by historians, but also entertaining for almost anyone. BreakAway Games has certainly succeeded in this respect.