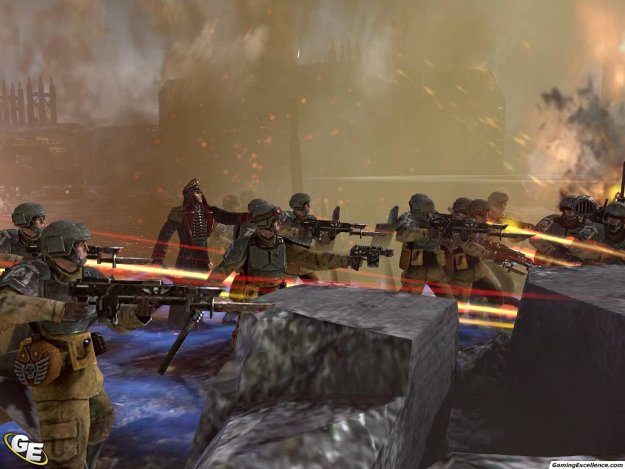 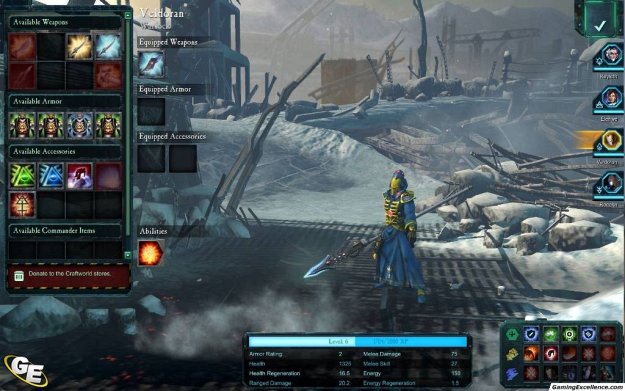 Anyone who is familiar with the Warhammer universe can tell you it's not exactly a nice place. Warhammer 40,000 is so dark and dreary that mass murders aren't a tragedy; they're basically business as usual. The Dawn of War games have followed this rather neatly, starting off with an Ork invasion, interference by Eldar and attacks by the Tyranids before invasions by Chaos and traitor Blood Ravens really stepped things up a notch.

Retribution builds off of this plot, making things even worse in the Aurelia sector. After the events of Chaos Rising the corrupt chapter master of the Blood Ravens has declared the heroes of the sector heretics, sending in Blood Ravens. Oh and the Imperial Guard has finally mobilized full-on to take back the sector but only after finding out that the Inquisition is ready to full annihilate every planet via Exterminatus. If that doesn't mean anything to you, let's sum it up: things have gone to crap.

The main game itself plays out fairly similar to the online component of previous Dawn of War II entries. There's a very minor base mechanic and you still get a few hero characters but the bulk of your fighting force is made up of grunts. So when you have a main stronghold in your hands you can pump out some regular troops, heavy weapons soldiers or, if you're a lucky Imperial Guard player, giant freaking tanks. Those who played the online extensively will feel right at home with this playstyle, including the power and requisition requirements to build units, while for others this will require a bit more strategizing than previous Dawn of War II campaigns.

Speaking of the campaigns you're not just going to have one to play. This time you have six full campaigns taking place across fifteen unique missions. Space Marines, Eldar, Orks, Chaos, Tyranids and Imperial Guard are all playable factions. Based upon what we saw it seems as if these campaigns will take place on more or less the same maps but with unique storylines going on for all the races although there is the possibility that they are linked. Exactly how this will pan out is currently unknown.

As was previously mentioned the Imperial Guard is a playable group in both online and campaign modes and boy are they a hoot to play. Unlike most other factions these guys are a lot more defensive as a general rule. The guard impedes your enemies via a ridiculous amount of men, blocking their offense with a meat shield technique. Then after holding enemies off for long enough they can deploy heavy armor, like the Leman Russ or even the mighty Basilisk, to trample your foes. The heroes of the faction aren't quite as impressive as some of the other heroes but they present interesting options. Most notable is the Inquisitor who, acting like some sort of hot kung-fu chick, uses her blade and psyker abilities to defeat her foes with overwhelming assaults.

Retribution is coming in just a few short months, landing on PCs March 1st. When it finally hits store shelves all loyal Dawn of War fans must prepare ourselves for the inevitable onslaught of how the new Tyranid campaign is totally ripping off the Zerg. Get your ceremonial sacrificial daggers ready for that time.