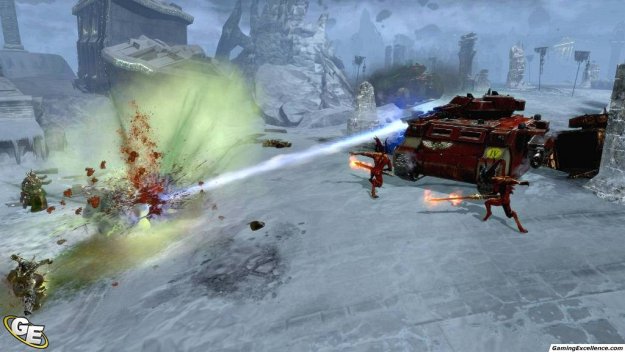 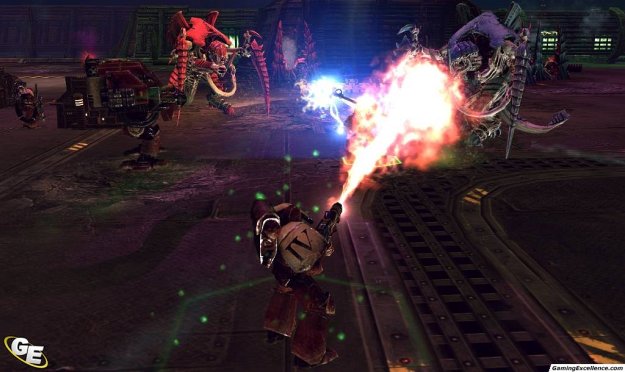 Released early last year, Dawn of War II was the follow-up to Relic's highly-praised Warhammer 40,000: Dawn of War, and its three standalone expansions. Not surprisingly, when the game surpassed all expectations one had a good feeling an expansion was in the works. With only a month or so before its release, we got a hands-on look at the new Chaos Space Marines race in the upcoming Chaos Rising expansion.

Chaos Rising will introduce a new single player campaign which takes place shortly after the events of Dawn of War II, this time on the Blood Ravens' world of Aurelia. The new twenty-mission campaign will let you continue from a previous save game, or start with a fresh new squad. Battling as the Space Marines, you'll face off against the forces of Chaos as they try and bring the Blood Ravens' to their knees. The game will introduce corruption, the ability for players to perform evil or corrupting acts, one example we saw was destroying a critical defensive gate as a shortcut instead of opening it properly. You'll also have the option to use corrupting abilities, or wear corrupted shielding and armour, should you take that route.

The first expansion won't mix up the gameplay too much, with the exception of the new Chaos Space Marines, and a variety of new units for the other races, the standard RTS/RPG hybrid gameplay will remain the same. The key to making any strategy game work is the balance, and introducing a new race can easily throw that balance off. While the new Chaos units are powerful (as are the new units for each of the other races), with a bit more tweaking I have no doubt Relic will manage to iron out any balance issues prior to the game releasing.

One of the largest new elements is in the multiplayer modes. Chaos Rising game will introduce a handful of new multiplayer maps, and the new Chaos Space Marines will be fully playable in multiplayer. The Chaos units are particularly varied and interesting; they each worship a different god and draw strength from it. You'll get a choice of three champion heroes, the Chaos Lord is particularly useful for powerful attacks and brutal combat, while the Chaos Sorcerer is better for ranged combat, spell casting, and special attacks (like portals). The Plague Champion is a more defensive hero, for those who prefer to protect what they've got rather then throw their units aimlessly into the fray.

The units for the Chaos Space Marines are an interesting change of pace. These aren't just your typical soldiers on steroids; you'll find a handful of particularly powerful and very unique units. A couple of notable examples: my personal favourite is the Great Unclean One, a powerful slow-moving behemoth that emits a poison cloud and spews toxic vomit on its enemies. The Chaos Dreadnoughts have the ability to go on a devastating rampage, destroying everything in their path (friendly or foe). As well, you'll have the option to use a variety of other units, such as the Chaos predator, plague marines, bloodcrusher, and bloodletters.

I also had a chance to explore the free-for-all multiplayer mode. Pitting up to six players against each other in an all-out battle royale, the winner is the first to reach a set number of points. These points are gained by capturing and holding as many of the seven available control points on the map. As well, you'll find resource points which will boost your available unit output so long as they are held. These free-for-all games have a tendency to swing back and forth very quickly. In a recent game, I started out with a dominant lead only to spread myself too thin and get attacked by a number of opponents, finishing next to last as I was never able to fully rebuild in time. This sort of chaos and unpredictability, while frustrating, can keep the multiplayer feeling fresh and players on their toes.

Similar to the expansions from the first Dawn of War game, Chaos Rising is a standalone expansion, meaning you won't require the original game to play. This alleviates the concern of fragmenting the community, and Relic has taken an innovative and likely very technically challenging approach to this effect. Both owners of the original game and the expansion only will be able to face off, if you own the Chaos Rising expansion you'll be able to play as the new Chaos Space Marines race, while owners of Dawn of War II can play as any of the four original four races. The benefit to this is that even if you don't own Chaos Rising, you can still play against others who are using the Chaos race. Shortly after the launch of Chaos Rising, Relic intends on releasing all of the new multiplayer maps and new units for the base races included in the original Dawn of War II for free, certainly a very nice gesture to the community and one virtually unheard of in the RTS space.

Set to ship out on March 11th, Chaos Rising is shaping up to be an excellent expansion to Dawn of War II, no doubt the first of several to come. With the introduction of the Chaos Space Marines, and a variety of new units for each of the other races, new multiplayer maps, and an extensive new single player campaign, Chaos Rising is a must have for fans of the series. Check back for our full review shortly after the game releases next month.