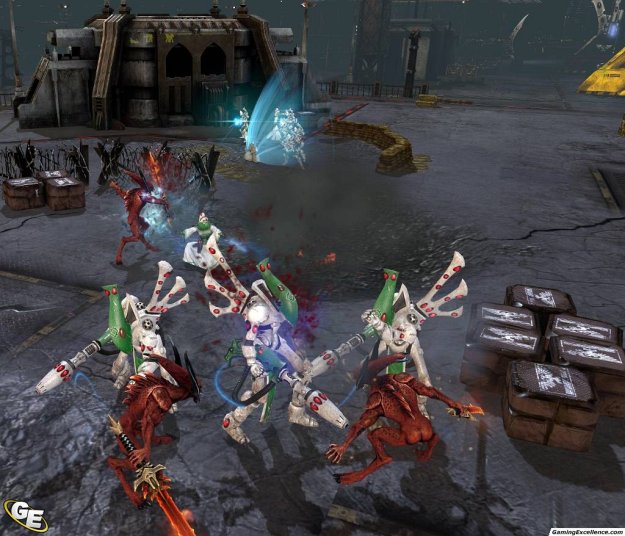 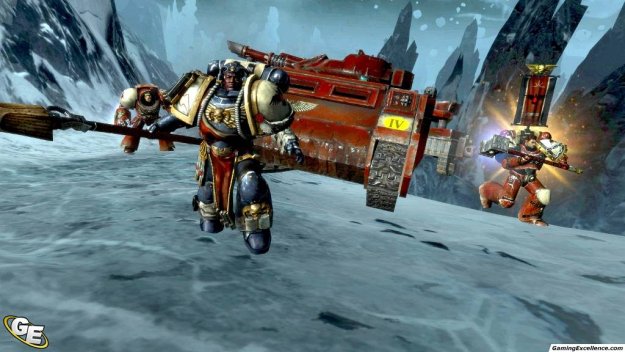 Dawn of War 2 came out as a sequel heavily diverging from what its predecessor had created. It was a tactical experience, focusing more on micro management of individual squads, levelling them up between story missions that saw no base building or resource management, but complex firefights and evolving characters. It was fun, unique, and it has spawned an expansion pack.

Dawn of War 2: Chaos Rising takes place a year after the events in the original game, after the threat to the sector has been wiped out. However now, planet Aurelia, thought to have been lost to the Warp, it's inhabitants destroyed and the planet reduced to a ball of ice, has returned. And it's broadcasting a distress beacon. As members of the Blood Ravens, your team goes to check it out, which culminates in a war against the forces of Chaos and death themselves. The game follows a much more story-oriented curve of gameplay than the original, which often means that things sometimes can be fairly linear, giving you only one mission to choose from. Still, the story is interesting, and manages to do much with the lore of the Blood Ravens and of the Warhammer 40k universe, including bringing Chaos marines (and all the demonic forces that follow) into the fray.

As one would expect, the gameplay is the same as the original title, with one notable exception that I'll get into in a bit. In the campaign (which can either be played on your own or co-op with another player), you are given command of a small group of characters, who sometimes come with a couple nameless squad mates. You use these men to fight through battles, earning experience to increase your attributes and abilities, and finding wargear that you can equip yourself with to make yourself stronger. The game's focus is not on basebuilding (in fact, there is none whatsoever in the campaign), but managing each character and their abilities to get through the missions you're presented with. If you've beaten the original game's campaign, you can transfer your characters straight over; otherwise the game will provide you with a set of powered-up, level-19 characters. Luckily, after the first mission - and only after the first mission - you can press a button to reset all of your assigned attribute points to distribute them how you see fit.

Now this is where things get changed up. The game presents to you the mechanic of Corruption. In the grim world of Warhammer 40k, corruption is a Very Bad Thing. It's what makes you swear fealty to demons and big ol' crazy things that want to destroy all life. And you might go mad too. Depends, really.

Anyway, the presence of Corruption is a large threat in Chaos Rising, and it's used as an important gameplay mechanic. When you begin the game, you're free of the stuff, Pure in the Emperor's Eyes. But things tempt you. Firstly, there are mission objectives that can corrupt your entire party. Either it's about taking the easy way out (such as shooting down an important gate instead of taking the hard road to open it, exposing yourself to attack), or it involves failing important side objectives, such as allowing a group of non-essential allies to perish due to your lack of haste. But that's not all. The game also presents you with pieces wargear that are powerful, powerful things. Their stats are raised high above anything you probably have at that point, and equipping them would make you a walking flurry of destruction. However, they also corrupt you in every battle you wear them in, so it's really all about balancing the pros and the cons.

Conversely, there are objectives and items that will reduce the corruption present within your squadmates. The objectives are harder, of course. And the items...well the items are terrible. Armour with negative armour values (which means you take more damage than if you were wearing nothing at all), and weapons that are like throwing pillows at your foes. But it means purification, and may just be worth it if you need to rid yourself of the Warp's taint.

Of course, if you want to, you can jump full-force into the darkness. Corruption comes with its own benefits. In addition to easier missions, you learn powerful abilities as your level of corruption rises. One such ability allows a character to place an explosive on an ally, detonating them in the middle of a crowd of enemies for a massive amount of damage. If that doesn't scream "Look how positively evil I am", then I don't know what does. Chaos Rising also provides you with the ability to upgrade certain weaponry and armour. In the original title, donating items gave you bonus experience while removing the gear from your inventory. In Chaos Rising, however, some pieces can be upgraded to become stronger. However, this upgrade often comes with a cost. 'Pure' items that reduce corruption will often be upgraded to normal items. And normal items will typically become corrupt. And from there, every upgrade that you commit will corrupt the entire squad, and this is even before you equip it! It's damning, but it's also very tempting.

In the end, your corruption drives the story, and affects the ending that you get. So if you want to stay free of Chaos, you're going to have to work for it and seriously avoid temptation. It's a great mechanic that really works well with the game's setting. As opposed to most morality systems present in games (notably role-playing titles), the corruption in Chaos Rising isn't simply just another path. It's a better path, a powerful path, one that will allow you to carve into enemies most foul. But the price is a heavy one, and will make you really wonder if it's worth it.

In terms of multiplayer offerings, Chaos Rising doesn't add too much, but it does add new units. First, of course, you can play as the Warp-embracing Chaos Marines. Similar to the Space Marines, but witha whole lot more...well, chaos, they're an interesting race to go pulverizing through the battlefield as, with units that blow themselves up, demons that can tear through enemies, and other delightfully dark goodies. In additon to the multiplayer skirmish modes, Chaos Rising adds the Chaos Sorcerer and Tyranid Hive Tyrants in Last Stand, the how-long-can-you-last-before-the-inevitable mode that pits you and two other players against wave upon wave of enemies.

Chaos Rising is a stand-alone expansion pack, so you don't need the original to play. Still, I'd recommend it, because otherwise it's really hard to get into the struggles of the Blood Ravens and their members if you don't even know who they are from the original title. This one does a good job as an expansion pack: it adds new mechanics without substantially changing those in the original game, gives new characters, a new race to play as in multiplayer modes, and new heroes for the Last Stand. If you really liked the first game, well then there's no doubt that you're going to like this add-on, and I'd recommend it wholeheartedly.