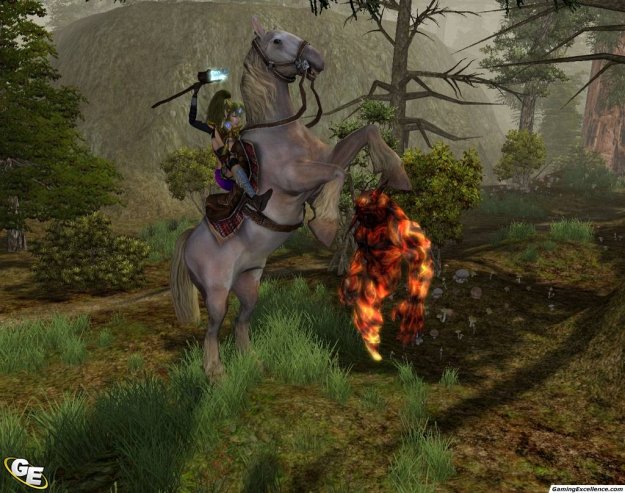 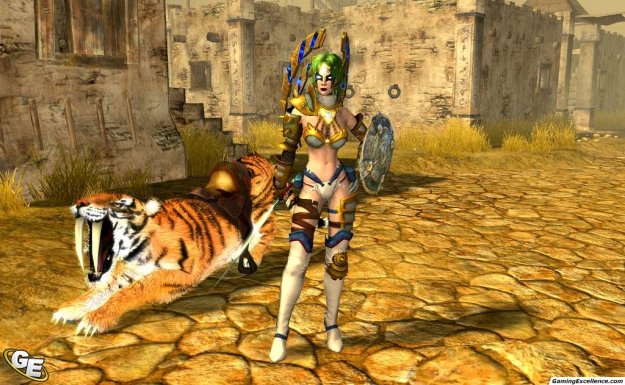 At a CDV press event in San Francisco California, CDV Software was gracious enough to take us through the latest Sacred 2 build, including a detailed run through on the multiplayer aspects of this anticipated title.

For those who missed our single player preview, Sacred 2 is a Diablo style hack and slash RPG with a heavy emphasis on magic spells, differentiated character classes, and collecting rare loot to make your character more powerful.

The multiplayer aspects of the game tie directly into the single player mode in several ways. First, no matter which mode you choose, the game is played on the same enormous world map. Mario Kroll of CDV informed us that the map covers "22 square miles of varied terrain and will take six hours to walk from one corner of the map to the other." Across the map are unique regions such as the northern Seraphim Island (a volcanic wasteland filled with tough enemies), a high elf region with a Mediterranean type climate, a human region similar to medieval England, and the expected desserts, marshlands, orc and troll regions, and tropical areas. Unlike Diablo, the map is not randomly generated, giving the game a hand-crafted feel that is more detailed and lush than any hack and slash title to date. Perhaps best of all, the game world is completely seamless, with nary a load time after the initial game load.

Whether playing single player or multiplayer, players will be using the same character is either mode, which is great for players looking for a little help on a particularly difficult quest or those who intend to play exclusively with friends.

However, character class plays a very large role in determining what players can play together. Sacred 2 allows players to choose a path of good or evil, and character class plays a large role in determining that path. The High Elf, Dryad, Shadow Warrior and Temple Guardian classes all have a choice in which path players will follow. The Seraphim class and Inquisitor classes are locked in to light and shadow paths respectively. Therefore, it's not possible for a Seraphim player to join up with an Inquisitor, but aside from that exception, it seems that there are countless other possibilities for players to match up with each other.

The host of any game determines which quests parties will embark upon, and this mechanic extends to the deity system. The deity system is essentially a god that is chosen by the player, and each deity offers exclusive secondary quests and combat techniques to the player. Therefore, playing with other players who follow a different deity than you will allow you to unlock some of these quests and items without starting a whole character anew.

Sacred 2 features a full suite of various multiplayer modes, including the standard campaign. There is also a free mode that allows unlimited side-questing without worrying about the main storyline, and allows the entire map to be open to the player off the bat. The game also features a PvE co-op mode for arena fighting with a friend, and also a PvP arena with fully implemented leader boards. For the truly sadistic, CDV is including a "hardcore" mode in which players can battle other players for survival. Lose in hardcore mode, and your character is permanently destroyed. Only one shall stand, and the rest can cry their way back to level one. There's hardcore, and there's just plain daffy, and the hardcore mode certainly straddles the line between them. Either way, it's there if you want it.

CDV has promised that the game will support all popular multiplayer connection options, including local LAN, Peer-to-peer connections and dedicated servers for up to sixteen players at once. The game also allows for players to seamlessly drop in and out of games.

The new build was running great on the PC, and seems to be progressing nicely since the last time we were shown the game. The PC version of the game features fully functioning wind and weather effects, including a very convincing day night cycle. The game also makes heavy use of NVIDIA's newly acquired PhysX engine for convincing physical reactions.

Sacred 2: Fallen Angel is looking extremely polished and well designed at this late stage of development, especially on the multiplayer side of things. The game looking like a fine successor to one of 2004's most acclaimed RPGs. Expect to hack and slash with your friends in the world of Ancaria by November 2008.