Sacred 2: Fallen Angel is a role playing game developed by Ascaron for the PC. The game was released on November 11, 2008.

When the original Sacred came out, years ago, the term "Diablo Clone" was bandied around a lot. To be fair, back then any top-down hack-and-slash RPG was called a Diablo clone. Sacred did a lot of things differently though, adding a large world to explore at your leisure, a complete lack of a skill tree, and a large variety of classes. Read More.

At a CDV press event in San Francisco California, CDV Software was gracious enough to take us through the latest Sacred 2 build, including a detailed run through on the multiplayer aspects of this anticipated title. Read More.

I was recently given the opportunity to meet up with Mario Kroll, Director of PR with cdv USA, for a hands-on demo of the upcoming Sacred 2. I played Sacred when it came out, and was amused at its free-roaming action-role-playing-game formula. It was like Diablo, but bigger in scope and idea, with a much bigger world and a whole lot more to do. Read More. 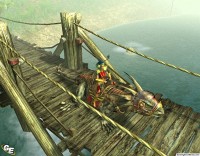 cdv Software announced that the action-RPG Sacred 2: Fallen Angel has gone gold for PC. The PC version will release on November 11, 2008 in North America, and will ship on February 17, 2009 for the Xbox 360 and the PLAYSTATION 3. Read More.

cdv Software Entertainment USA announced an agreement to publish ASCARON Entertainment’s highly anticipated Sacred 2: Fallen Angel in the United States, Canada and Mexico. The title is slated to launch on PC and Microsoft Xbox 360 in the second half of 2008, timed to meet consumer demand during the 2008 holiday season. Read More.