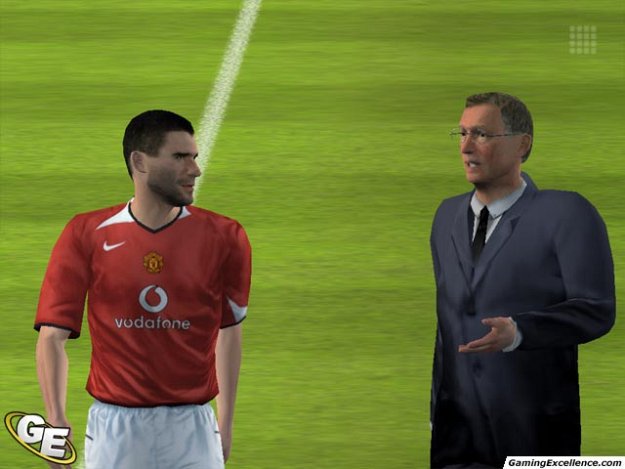 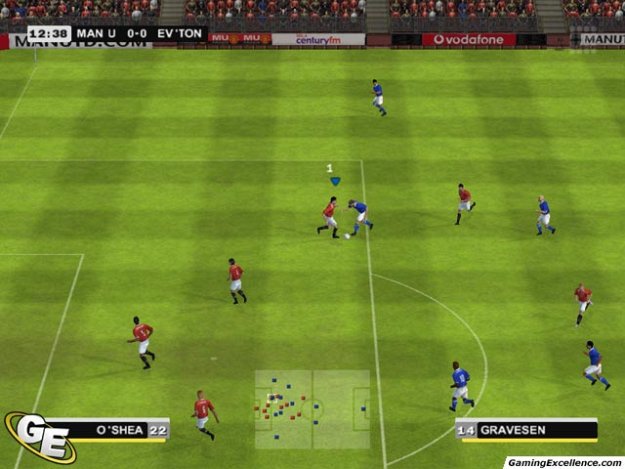 Outside of North America, soccer, better known as football, is the sport to watch. With highly competitive teams located worldwide, it results in some very intense games. As it turns out, Codemasters has capitalized on this phenomenon by releasing not one, but an entire series of soccer games based on many popular European teams. Manchester United Soccer 2005 is one of the few of these to be released in North America, and it's probably for the best.

The name of the game appears to be simply a marketing gimmick, and the title contains all the popular teams, as well as an option to create a new custom team. Players have the ability to select their own line-up, formation, and hot key tactics; as well as create their own super league and career player. The latter of these is supposed to be a major highlight of this game, not only will you have the satisfaction of playing for your favorite team, but also as your player progresses through matches, he earns skill points that can be used to improve his abilities.

Manchester United Soccer 2005 has a simply menu system to access and manage different aspects of the game, except for one major oversight. The keyboard controls cannot be viewed or mapped within the game itself, it must be configured in a window that appears as the game is starting, making it very difficult to learn the control scheme. I found myself really frustrated, while brushing through the manual all too often trying to memorize the default keyboard controls, definitely not a good first impression of the title.

Graphically, the title is average but nothing spectacular, especially after considering the title comes shipped on a DVD-ROM disc, and has an install footprint of nearly three gigabytes. Up close, character detail is quite good, however from a distance it looks mediocre at best. Finally, fans in the stadium are absolutely horrible should they get caught in a replay, as they sit flat and non-responsive. Overall, the graphical aspect of Manchester United Soccer 2005 is mediocre at best.

This brings me to the game engine. Although Codemasters may dub this as a "faster, more responsive match engine", I would argue to the contrary. More often than not, I found that gameplay felt sluggish and players seemed unresponsive to user input. In addition, the AI in the title is atrocious. As I would be rushing down field toward the opponent's goal there was always a significant shortage of my teammates following my lead. This is not much of a problem if you learn to simply avoid attempting to pass altogether and easily walk around players on the opposing team, resulting in a one-on-one with the goalkeeper. Queue up problems with those keyboard controls once again, as the inclusion of the "precision trigger" which allows you to fine-tune the point of contact on the ball, players may find shooting on goal to be more than slightly frustrating. This precision trigger is supposedly adding realism to this interesting attempt in the sports genre, as it allows the ability to control direction and power of each shot, however due to the high complexity of getting a simple shot off, it falls flat on its face.

Overall, Manchester United Soccer doesn't quite measure up to the competition. It is neither revolutionary nor the most realistic soccer game on the market, with few features to stand out of the crowd. If you are looking to challenge your friends over the internet to a friendly soccer match, don't look here. The title offers no online play, simply multiplayer support on the same system. Only the most die-hard Manchester United fans will enjoy this title, and even that is a big assumption.