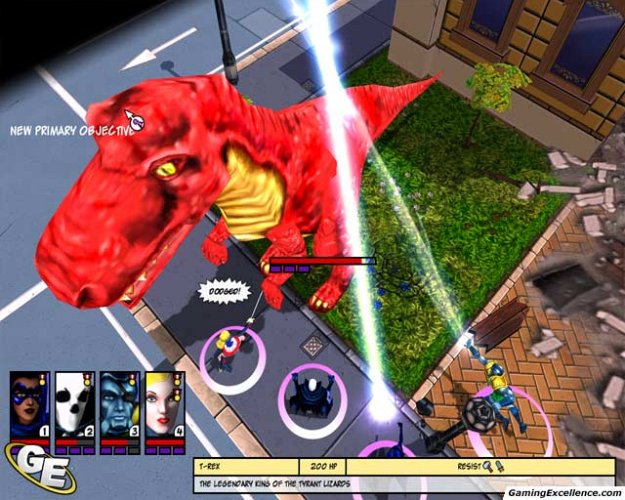 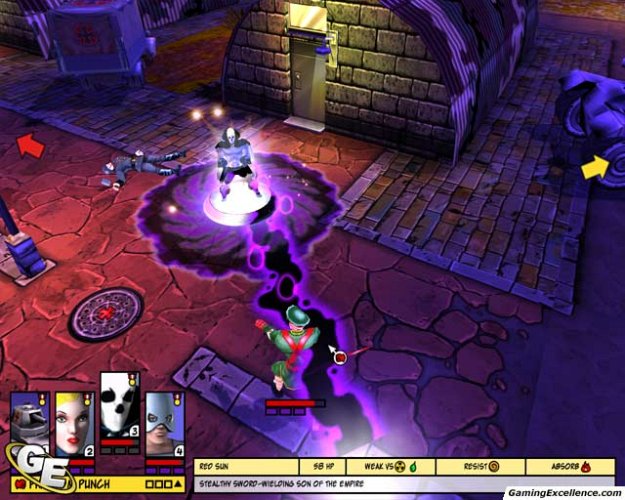 Freedom Force vs. The Third Reich is the follow up to the innovative Freedom Force title published in 2002. Developed by Irrational Games, it promises to deliver the same comic book action as its predecessor. Although the sequel retains the same combat system from the previous game, it offers a great new story, new characters, and a variety of innovative new powers for both heroes and villains alike.

The story for Third Reich picks up after the events of the original. You begin by hunting down a villain named Nuclear Winter, and a beautiful woman named Red Oktober. After saving the world from the Russians and a Nuclear Strike, you then move on to challenge the Third Reich and eventually battle for the existence of time and space. Without giving too much of the plot away, Third Reich has a great story that doesn't take itself too seriously, and will keep you entertained throughout the game.

The first thing you'll notice when starting Freedom Force vs. The Third Reich is the overall appearance and interface. In this respect, the developers really nailed the comic book feel for this title. Everything from options to the customization of characters is all done with great style. There are various difficulty levels to choose from, for both beginners to advanced players alike, and you can even change the game's difficulty after having initiated a campaign. This means you can always adjust the difficulty if you feel that the game is getting too easy or too hard as you progress. There are also "speed controls" which allow you to speed up or slow down the gameplay to your liking.

When starting the game for the first time, you'll be treated to a comic book cutscene and a tutorial taking you through the basics. The tutorial is quite innovative, it works by having your characters touch symbols, which will prompt you to use a power or give you a hint. These tutorial icons are present throughout most of the initial levels and do a good job of explaining how to manage your heroes effectively in combat. The fights in this game are very similar to those found in strategy-based RPG games. You manage a team of four in most levels, and can either send in the team to confront your opponents face-to-face, or use their special abilities to blow enemies away.

The sheer amount of characters in the game is amazing. Each character offers a wealth of different abilities, powers, and are generally quite unique. Players begin with just a small handful of heroes, but as the game progresses you are able to recruit new characters or simply upgrade the powers of your existing ones. Prestige is used to acquire new heroes, and is obtained by completing missions and acquiring "prestige capsules" within the game. Your characters can also gain experience points to spend on new powers or to make existing powers stronger. Not only that, but the game also has a built in hero creation mode which lets you create your own character. The creation of your own hero is surprisingly vast in options, and offers customization ranging from overall appearance, to specialized powers and abilities such as flight. You can then recruit your custom hero in the campaign, or compete with them in a multiplayer deathmatch.

In the graphics department, this game looks very much the way you'd expect a comic book themed game to look. Everything from beams of energy to the destruction of buildings looks superb. Even the characters themselves have a lot of style and move with great fluidity on the screen. Although the game does look a lot like the original Freedom Force, it still shines in comic book colors. Levels have a great diversity of textures, and engage players by making them feel like they are part of the story. It may not look like Half-Life 2 or Doom 3, but it doesn't have to in order to deliver a great experience.

Sound-wise, Freedom Force vs. Third Reich is very innovative and creates a good atmosphere for the game. The background music is similar to what you would expect in an old cartoon, and the whole hero theme is developed well. The beams and punches have the typical sounds found in classic television series and are accompanied by "POW" and "BAM" signs on-screen. The voice acting is really well done and the narration puts you in the mood to fight crime. One of the best elements of the Freedom Force series is the fact that there is an element of humour injected into the title, and this is definitely present in the sound as many of the voices are very over the top and comical at times. In addition, the voice of Mentor is a great highlight of the game as he gives you new objectives in an old TV series narrator voice.

Gameplay in Third Reich is fantastic. It offers a very engaging experience, with so many aspects to accomplish and tactics to master. The sheer amount of characters and powers can keep you playing for hours on end. Coupled with the hero experience systems and the ability to recruit new heroes, Freedom Force vs. The Third Reich offers a lot of replay value. Factoring in the character customization and it even further adds to this replayability. Unfortunately, Freedom Force vs. The Third Reich isn't perfect, as the game falls a bit short in the multiplayer aspect. The game offers two multiplayer modes, deathmatch and "story mode." Story mode, however, is simply a different form of deathmatch, with heroes and villains instead of just heroes. It can be fun to beat up on a couple of friends online but the game gets a little repetitive after a short while. Although a nice addition, the multiplayer is lacking, fortunately that is made up by the superb single-player campaign.

Freedom Force vs. The Third Reich is a great addition to any gamer's collection. Despite a less than stellar multiplayer mode and only a few serious enhancements from the original, Third Reich does a lot right. The ability to interact with objects in the world to inflict damage, or watching the destruction of buildings after a heated battle with a boss will keep players coming back for hours. With such a vast collection of villains and heroes, combined with a superb storyline, Freedom Force vs. The Third Reich offers a great comic-book experience.