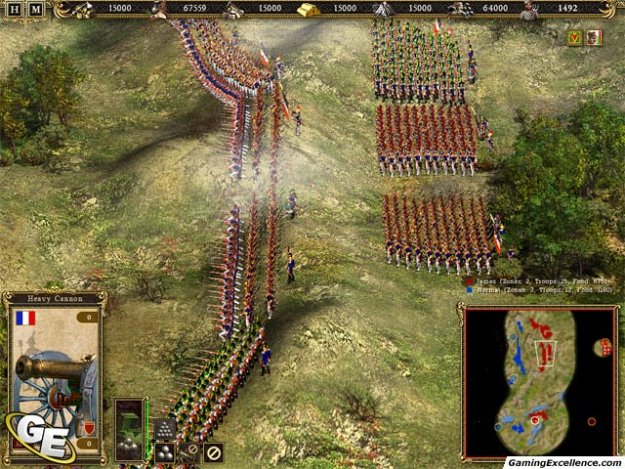 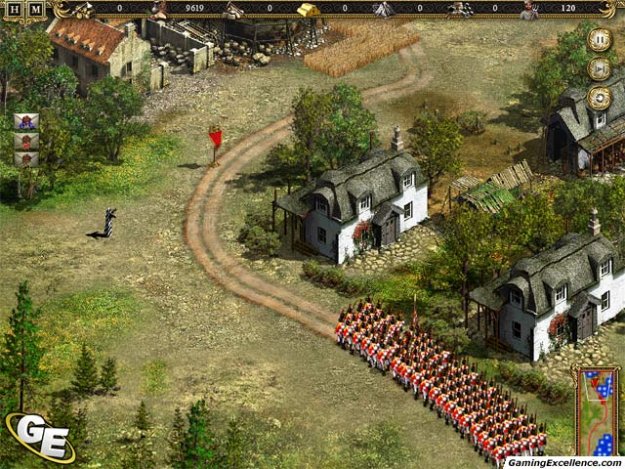 Two hundred years ago, Europe was a land wrought with conflict and dissent. In France, a little man by the name of Napoleon Bonaparte spearheaded a revolution that toppled the existing monarchy and gave rise to a grand new Republic. With powerful legions behind him, Napoleon swept across much of the Continent in the span of only a few years. Not since the days of Alexander the Great had Europe witnessed such a bold leader who both inspired terror and acted as a great unifier of nations. It's no wonder, then, that acclaimed developer GSC Gameworld chose him as the subject of their latest creation Cossacks II: Napoleonic Wars, the sequel to 2000's smash hit Cossacks: European Wars which sold over 2.5 million copies worldwide. Cossacks II builds on the foundation of its predecessor while introducing some novel features that are sure to please fans of the historical RTS genre. And while the graphics engine is far from revolutionary, the exquisite attention to detail elsewhere reveals that the game is a labour of love.

Most of the events in Cossacks II are based on actual historical records, and take place between the years of 1798 and 1809. Players have a choice of commanding one of six empires - France, Britain, Austria, Russia, Prussia and Egypt - each with its own set of strengths and weaknesses. Like in other major RTS titles, each empire is distinguished by several unique units that excel in a particular style of combat. The French army, for one, has the benefit of such units as chasseurs and grenadiers while the Egyptians have more effective melee attacks and camels.

Gameplay occurs on fairly large and detailed maps spanning the whole of Europe and some of the Middle East. Unit movements and the location of settlements can be tracked using the handy little map in the bottom right corner of the screen. Range of sight is limited to a relatively small area though, with the rest of the map being shrouded in the fog of war. Like in Age of Empires, the focal point of any game is the player's home town. From there, he or she can create new buildings and technologies, train additional soldiers, and manage vital resources such as coal and iron. Cossacks II adds a bit of a twist to the norm in that surrounding villages are not necessarily occupied by hostile forces; rather, empires have a certain zone of influence that allows them to indirectly benefit from their resource-rich neighbours. Players must be careful to guard these settlements, though, since they can easily fall into enemy hands.

Cossacks II offers several game modes that allow players to choose between arcade-style combat and more strategically-oriented play. In single player mode one can jump into a number of prepared skirmishes and battles, some historical and some not. Campaign mode, while impressive sounding, is really just a set of tutorials in disguise. The one (just one) full-fledged "Liberation" campaign is aptly titled since it's exactly the sentiment I felt when this awful scenario finally ended; the story was uninteresting and the voice acting was like something out of a cheap infomercial. Apart from standard RTS fare, the developers have also added a turn-based mode called "Battle for Europe" that's reminiscent of classic board-games such as Risk. Players use a combination of diplomacy, economics, and war tactics to manoeuvre their army across a map of Europe. Moving into enemy territory or vice versa kick-starts an RTS battle sequence in which the invading forces are pitted against the home defenders. If the player has enough squads to conquer or repel the enemy, the territory becomes part of their empire - at least for the time being.

The game also includes a basic multiplayer mode for both LAN and Internet-based play. LAN games are virtually identical to their single player cousins with the exception that gamers can battle their friends instead of the CPU. Internet play offers a bit more variety in this department. Here, "armchair emperors" can engage in a Rating Game where each person is given a segment of Europe to call his or her own. Players then have an opportunity to build up an army and invade each other's territories, all the while boosting their overall online score.

In terms of graphics, Cossacks II leaves something to be desired. Unlike other modern RTS games - Imperial Glory and Age of Mythology, to name a couple - the developers have chosen to stick with an outdated 2D engine that, in spite of some gorgeously detailed artwork, looks somewhat amateurish. The team at GSC Gameworld brags about "improved 3D graphics" as one of the key improvements over the original Cossacks. While the engine may indeed use Direct3D functions, the terrain and units are still flat as a pancake. Moreover, the lack of a decent zoom function sets the game back when compared with the competition. Still, the sheer number of units the engine must render at once - a max of 64,000 according to the developers - blows the other contenders out of the water. The main challenge I foresee for the iteration of Cossacks will be to create a 3D engine that can render thousands of units and look sexy at the same time.

The audio in this title is somewhat of a mixed bag. On the one hand, battle sequences are rife with authentic 19th century military sound effects; musket blasts, artillery fire, and shouting voices add that touch of realism that can so easily be lost in non-graphics intensive titles. The other half of the story is the musical score, which is unfortunately very bland and repetitive for the most part. Although the pieces (all orchestral) seem appropriate to the era, the selection is pretty dismal and the obvious looping of certain key musical themes can quickly become annoying.

Realism is usually a stickling point for the historical RTS genre, and Cossacks II rises to the challenge. Rather than simply determining victory by sheer numbers, for instance, the developers have implemented a more advanced and true-to-life system in which experience and morale play a key role in how effectively troops fight. Consequently, it's not unusual for regiments that are fresh and inexperienced to frighten and retreat easily even if their losses are insignificant. This is where having a few battle-hardened regiments at your disposal can provide that extra edge a player needs to win. As well, certain special units such as drummers, officers, and priests can bolster morale and help to ensure that the soldiers live to see another day.

In the end, while Cossacks II is both a fun and immersive game, it still strikes me as a much improved yet still very similar copy of Cossacks: European Wars. GSC Gameworld has essentially concentrated its efforts on rendering massive battles with thousands of units while perhaps neglecting other game elements. Still, this baby is just as much fun as the original and fans of the genre will surely appreciate the advanced tactics and great gameplay it provides.