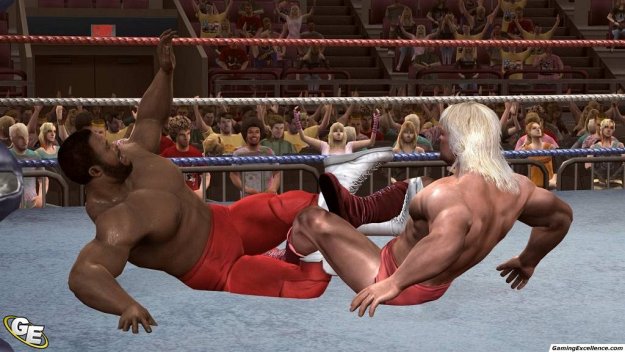 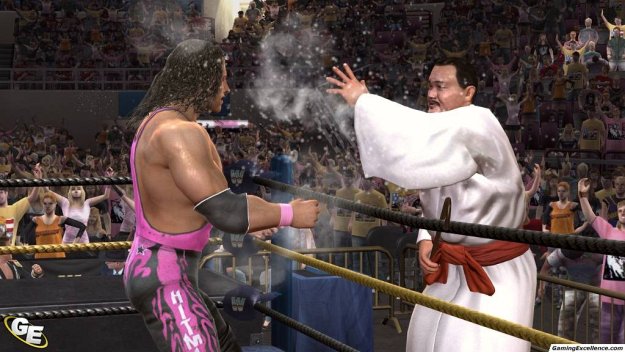 It's become a yearly tradition among the WrestleMania weekend festivities. For an evening, the WWE talent takes a night off from beating each other senseless, and instead heads to a virtual ring where they'll face a familiar challenge, without the bruises.

Hosted as part of the WWE's Axxess fan event, THQ's Superstar Challenge is designed to let the fans get up close to a handful of their favourite superstars, and get a glimpse of the latest wrestling game in action. It also provides a superstar bragging rights for the entire year. This year, THQ appropriately brought their recently released Legends of WrestleMania game to the ring. Among the combatants, Sgt. Slaughter, the Million Dollar Man Ted Dibiase, and Dusty Rhodes, CM Punk, Cody Rhodes, Finlay, Hornswoggle, and Brian Kendrick, among others. In the past, Sheldon Benjamin has dominated the THQ Superstar Challenge winning four straight championships, but opted not to compete in this year's main event.

"The 7th Annual THQ Superstar Challenge in Houston is the perfect way for us to celebrate the hard work and dedication of WWE and its incredible talent throughout the year," said Scott Guthrie, executive vice president, publishing, THQ. "We are excited to relive, rewrite and redefine history this evening through our latest release, WWE Legends of Wrestlemania, and crown the 2009 Challenge champion."

"The THQ Superstar Challenge has become a fundamental part of WrestleMania weekend," said Donna Goldsmith, chief operating officer, World Wrestling Entertainment. "We are pleased to incorporate this star-studded event into WrestleMania Axxess and further share this outstanding videogame with the WWE Universe."

Traditionally the event has been held with the annual Smackdown VS RAW series, which is a more technical game with a fairly steep learning curve. Its complex control scheme rewards more experienced gamers, and pulling off some of the more powerful and flashy moves requires some co-ordination. While entertaining to watch, it's resulted in a few frustrating moments in past events. This year, THQ opted to showcase it's recently released Legends of WrestleMania game, which is a more accessible game that allows you to pick up the controller and go. Given the event is part of the WrestleMania festivities, it seemed appropriate.

With a large audience surrounding the ring, and legendary famer Howard Finkel announcing the play-by-play, the WWE talent took to the ring in a do or die round of Legends of WrestleMania. Among the highlights, Dusty Rhodes took on his son Cody in a crushing performance, and Sgt. Slaughter put on a good show against CM Punk. As always, the divas Beth Phoenix, Michelle McCool, and Brie and Nikki Bella were popular among the crowd, unfortunately Beth Phoenix was the only diva to make it past the first round.

After the round by round elimination of superstars, only two were left standing. Odds-on favourite Kofi Kingston and Cody Rhodes took to the ring. Legendary manager Jimmy Hart took the side of Kofi, and managed his corner of the ring in the final bout. The match was back and forth, and after a few tense moments Kofi was able to get the pinfall, and nab the Championship.

And that's when four-time superstar challenge champion Sheldon Benjamin showed up. After a bit of trash talking, Kofi and Sheldon agreed to settle their differences in the virtual ring. Putting their egos on the line, both superstars opted to play as themselves, with Jimmy Hart again managing Kofi. Surprisingly, the match was very one-sided, Kofi pretty much dominated, and while Sheldon managed to get a few shots on Jimmy Hart outside the ring, that was about all he was able to materialize before getting pinned.

THQ's Superstar Challenge has been a hit among the wrestling faithful, and this year's event proved no exception. Can Kofi make it two in a row and eventually challenge Sheldon's past dominance? We'll find out next year.