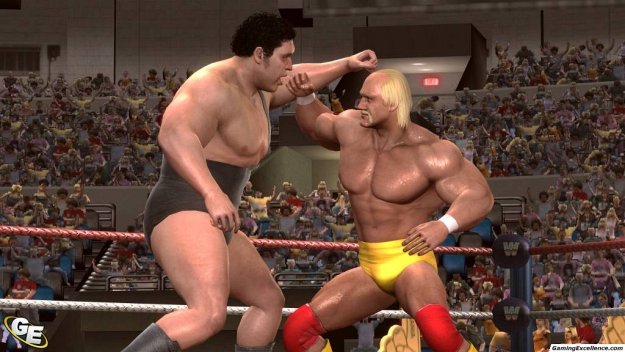 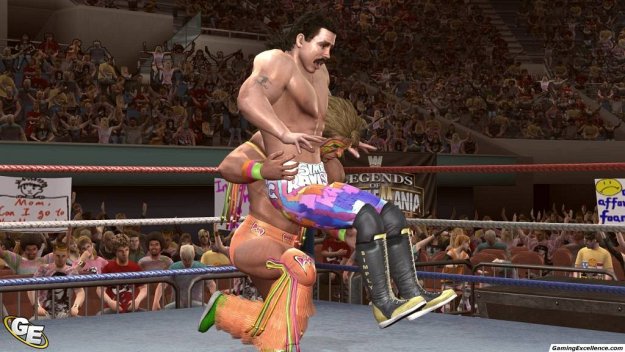 It's WrestleMania season once again and THQ's wrestling franchise certainly wasn't going to miss the opportunity to celebrate the 25th anniversary of the World Wrestling Entertainment's main event. WWE Legends of WrestleMania is a tribute to the league's first fifteen years of the Pay Per View event and to the superstars we've all inevitably heard of, one way or another. A quick follow up to last year's WWE Smackdown vs. Raw 2009, this latest title borrows its predecessor's graphics engine but little else. In fact, this article will highlight just how different this iteration is, and why it may cost the franchise its key audience.

The game's single-player campaign is what you would expect: an interactive retrospective of some of the highest profile matches in the history of the event. The campaign challenges you to relive, rewrite and redefine key matches, and introduces a new element to help you along the way. Each campaign match comes with a set of objectives worth varying amounts of points, and have different purposes depending on which campaign you're playing. Complete enough of them in a match and you get a gold medal in your trophy room, plus a small unlockable, usually in the form of an additional costume for a wrestler or a WrestleMania movie clip. If there's one big downer here, it's that obtaining all of the game's gold medals doesn't unlock anything special, except for a PS trophy. However, the campaign is nicely supplemented with short clips of vintage WWE footage to get players up to speed on the storyline. This is a nice touch that I expect few to skip, as the introduction to each match is both entertaining and energizing. In fact, from the game menus to the mullets in the audience, this game spells 90's through and through, and this single fact is by far the best aspect of this title - not because the 90's were particularly great, but because the nostalgia factor is impregnated into all facets of the game.

The WrestleMania Tour mode takes players through an interactive flashback. In the 'relive' matches, you play as the winner of some of the most entertaining matches in the series, and following the objectives ensure that your battle is parallel to the original. This means getting Hulk Hogan's momentum meter high enough to pick up Andre the Giant, and getting a face-full of drum set as Stone Cold versus Shawn Michaels. In the 'rewrite' matches, you replay matches that could have ended differently, whereas the 'redefine' campaign puts a twist on key matches by changing the match type. In these last two campaigns, the objectives are simpler and possibly intended only to extend the match for your virtual fans' entertainment, so you can't just rush straight for the pin. Overall, the single-player campaign is entertaining, challenging and a great flashback; there isn't much more fans could have asked for.

The game has a second single-player mode by the name of Legend Killer, where you can pit a created wrestler against the legends of WrestleMania. You'll have to beat four predetermined tiers of legends, each requiring you to defeat ten opponents in a single sitting. A fifth tier takes you through all 38 challengers, which means you'll be sitting on your couch for at least 90 minutes. Completing a tier grants you the experience points accumulated for the moves you performed throughout the matches, which can then be used to upgrade your wrestler's stats. While the concept of gradually upgrading your wrestler stretches out the length of the game, its implementation is somewhat dull and will have you begging for some variety.

The main shift in THQ's wrestling formula surfaces in the gameplay. The interface has been simplified, replacing the limb damage display with a stamina meter and a momentum bar. The stamina meter quite simply represents how easily it would be for your wrestler to kick out of a pin; you're in big trouble when you're in the red. The momentum bar increases as you perform moves against your opponent and will gradually take your wrestler through three momentum levels. The higher levels allow you to perform more powerful strikes and grapples, and your finisher is unlocked once you reach the third level. Momentum can be sacrificed by performing one of four taunts, each granting a temporary boost to one of your wrestler's attributes (stamina, strength, etc.). Pretty simple stuff.

As part of the redesign, the controls have also been reconfigured in an apparent effort to smoothen the learning curve. It's no secret that SvR's control scheme was incredibly difficult to pick up, but it satisfied gamers' thirst for variety in what could otherwise be a very monotone button-mashing series. Legends drifts back to the old days when the number of buttons was limited - forget the second joysticks and the trigger buttons - and assigns each of the four main buttons to these actions: strike, grapple, defend, and misc./contextual. The potential for repetitiveness is somewhat avoided by variations in tapping, pressing or holding these buttons, but this is more often frustrating than useful: unless you're really concentrating on your thumbs, you're probably going to execute it wrong. When you're playing Hulk Hogan against Andre the Giant, this makes the difference between an Irish Whip of your opponent to the turnbuckles and attempting to hoist him up into the air, which obviously results in him falling right back on you. Nevertheless, the developers did make a valiant effort to help even the veterans of the franchise with the control scheme, by making it an integral part of the campaign mode: objectives always show the combination required to perform the necessary action.

To supplement the gameplay with additional variety, a new combo-chaining mechanism jumps into play in particular situations and challenges players to hit a button before their opponent to complete a move or reverse an opponent's. Overall, this seems rather gimmicky and wasn't really necessary. After all that, the game will still require you to mash the thumb sweat into your buttons for such key actions as standing after a fall and getting out of a pin; the latter being nearly impossible anyway if your opponent has the slightest bit of momentum, so don't bother trying. What's worse, the momentum gained by successful combo chains is ridiculously unbalanced. Once you figure out how to trigger them, completing two or three of these will get you to momentum level 3, granting you quick access to your devastating finishing move real early.

Fans of SvR will be saddened to find that the list of exhibition match types has been shortened to the basics - no crazy inferno matches in this one - including: submission match, steel cage match, hell in a cell, tag team, triple threat, and of course battle royale. There's enough variety there to keep new players busy for a while, but followers of the franchise will no doubt go back to SvR once they're bored with the new character set. Owners of both titles can import the SvR 2009 roster into Legends, which may keep them occupied just a short while longer. The online modes work pretty much the same as in SvR, so there's nothing really captivating there either.

WWE Legends of WrestleMania seems greatly at odds with the established franchise, known for its realistic simulation model and wide variety. THQ may be able to attract an older generation of gamers with the nostalgia factor and simplified gameplay, but this title will do nothing to further the franchise amongst its established fan base.