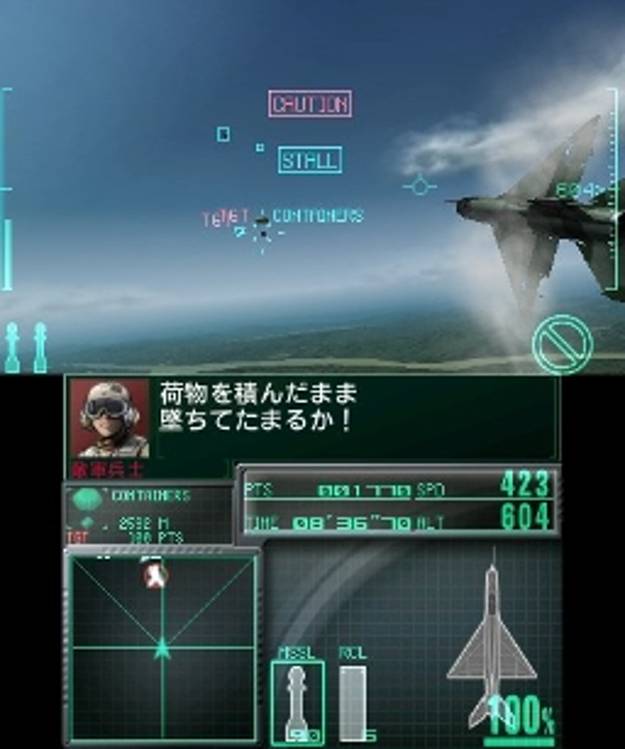 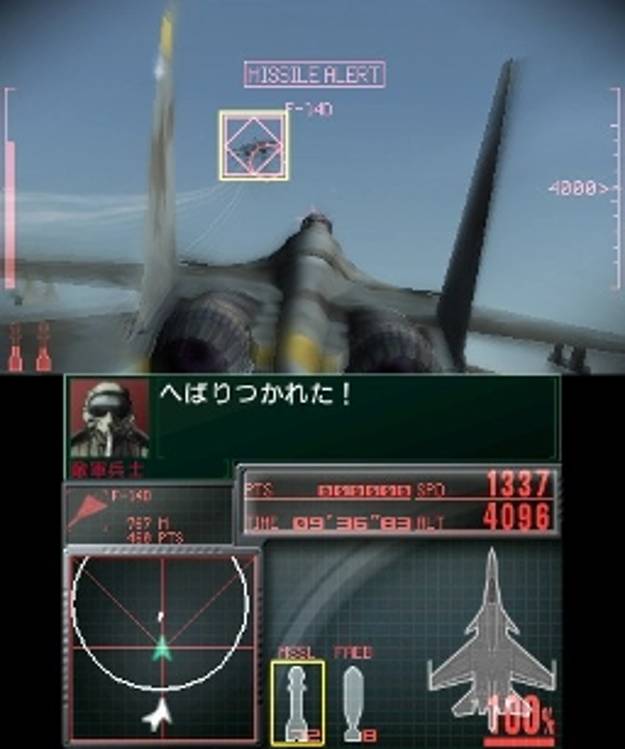 In recent years, it sure feels like no genre has been more maligned and ignored than that of the combat flight simulator. To the best of my recollection in the last decade, there have been a few WWII flight sims on the major consoles, a single instalment of Microsoft's Flight Simulator, and the Ace Combat series. Ace Combat has always been about fast planes blowing up other fast planes. With the release of Assault Horizon last year, Namco saw fit to tone down the Anime inspired goofiness with an entirely different goofiness in the gritty war movie mold. Now, it's companion title is available on the 3DS, and while it gives a noble effort to replicate the solid console experience of Assault Horizon, it ultimately ends up being another forgettable title for Nintendo's nifty handheld.

The storyline is not even worth mentioning. You're playing as a pilot for a military force in a fictional country, taking on rebels... because they're rebelling against you? Even if I cared about the storyline, the developers sure didn't. You get a small briefing before each mission explaining that the rebels are up to no good, and you've got to head out and stop them, usually by blowing them out of the sky.

The gameplay mechanics are very solid, especially when you consider the experience is taking place on a handheld. Before each mission, you'll select your plane, upgrades, weapons, and co-pilot. There are loads of options for each, and more become unlocked as you progress through the game and earn money for taking out enemy pilots. To be honest though, my fully upgraded plane from the start of the game was usually my go-to jet thanks to the numerous upgrades I had accumulated. The different planes do have noticeable differences is stability, handling, and speed.

Once you're in the air, the game has a decidedly arcade like feel, but it's not completely devoid of realism either. You'll have to keep an eye on your altimeter and air speed. In a nice touch, the higher your altitude, the fast you'll have to travel to avoid stalls. In general, the game's objectives have you defending an objective or attacking one, be it on the ground or in the air. While you're able to take out enemies with lock on missiles and your trusty machine gun on your own, you'll likely have more success if you use the game's lock-on flight mechanics. Essentially, as you follow an enemy, a meter in the bottom right corner will begin to fill. Once it passes the half-way mark, you can press a button to give up control for two seconds while the game shows you a short cutscene of your plane committing some sweet acrobatics. The longer you wait to fill up the meter, the closer and more lined up your target will be. When you regain control, you'll be right behind your enemy, ready to give them a missile or two up the tail pipe. Some may argue that this mechanic makes the game too easy, and they'd be right. At the same time, however, some rigid time limits in certain levels will have you thanking every advantage you can get.

Enemy AI is generally decent, but predictable. When they have you locked on, a quick prompt will allow you to perform a quick dodge of a missle. The mechanic works well, and it's a good way to compensate for the system's lack of a second analog stick. You co-operative AI is all but useless as anything but cannon fodder.

As fun as the combat can be, it's limited, repetitive, and the entire package offers less than four hours of real gameplay. While the console version broke up monotony with varied objectives like air strikes, defending locales, and shooting down bombers in addition to AC-130 and helicopter levels, the 3DS version never takes you out of the jet cockpit. Objectives are strictly attack or defend, and even ground based targets are few and far between. There's no multiplayer to speak of, and the only thing to do after beating the game is replaying the campaign on a higher difficulty or replayed the levels in the challenge mode. Considering the game retails for $30 (still $10 cheaper than most 3DS games at least), you'll get around the same hours of gameplay as a $5 iOS game. That's a bitter pill to swallow.

The game looks and sounds great though. The 3D effects are both subtle and pronounced at the same time, particularly the environments when viewed from high above, although it gets a little blurry up close. The nose of your jet features just the right amount of 3D oomph, and explosions look crisp and sound punchy on either the standard speakers or with headphones. Planes look and animiate beautifully as well. It's too bad the voice acting is lame and repetitive. You certainly get your money's worth in the visual aspects.

Ace Combat: Assault Horizon Legacy is by no means a bad game, it's just a very limited experience with an unfortunate price tag. If you're looking to kill a few hours with a fast paced, arcade style flight sim on your 3DS, you really can't do worse, although I would argue that Star Fox 64 3D offers better longevity and fun factor for a portable flight game, provided you don't mind the furry animal, sci-fi motif. Wait for the inevitable bargain bin find before you jump into this cockpit.