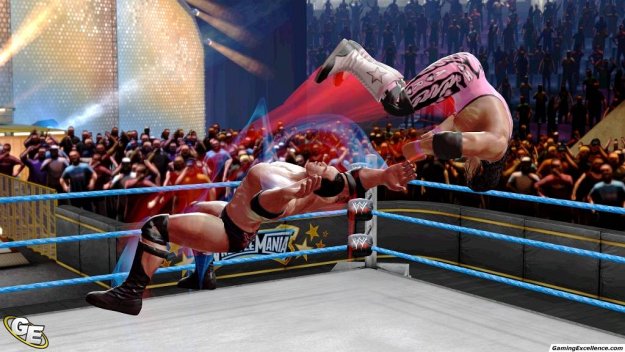 In my youth, I could not be pulled away from Monday Night RAW. Yes, I'm one of those geeks that found myself riveted by the soap opera dramatics and high flying athletics that were present in every wrestling event. In recent years, my interest in the "sport" has waned somewhat, but I will always have a soft spot for the glory days of Shawn Michaels, Bret Hart, Yokozuna, Hulk Hogan and even Mr. Perfect.

Therefore, it was with great enthusiasm that I picked up WWE All-Stars for review, eager to relive my childhood memories with some of my favourite wrestlers of all time. Suffice to say, WWE All-Stars did not disappoint. This is a fun, exciting wrestling game to play on your own and with friends, especially if you grew up watching these guys bludgeon each other every Monday night.

Gameplay wise, WWE All-Stars is wrestling simplified to its purest essence, and nearly anyone can pick up a controller and start body slamming the competition around. If the WWE Smackdown vs. RAW series is wrestling's Gran Turismo-style simulation, then All-Stars is its Need for Speed. If anything, WWE All-Stars reminds me of the glory days of arcade sports titles like NBA Jam and NFL Blitz. This is all pure, over-the-top action. Slams and throws are greatly exaggerated, with wrestlers flying dozens of feet in the air with larger than life impacts.

The controls really couldn't be simpler for a wrestling game. Two face buttons correspond to quick and heavy strikes, and the other two face buttons correspond to quick and heavy grabs. The triggers handle things like running, entering and exiting the ring, picking up items, and reversals. Signature moves are done by pressing two face buttons at once. Finishers can also be done by filling an energy meter, charging the move, and then letting 'er rip. It's really as simple as that. It only takes two or three matches to get used to the fundamentals of the game, and the rest is all timing.

Reversals require pinpoint timing, and to be honest, they feel kind of random. The CPU can easily pull them off, especially at higher difficulties, resulting in some frustration. Meanwhile, you can feel certain that your timing is right, but to no avail. It's certainly not a game breaker, however, but your TV may be offended at the things you'll call it when the game is at its cheapest.

All-Stars features an enviable roster of wrestling greats with nearly two dozen past and present stars of the WWE. Many of my favourites like Shawn Michaels, The Rock, Bret Hart, Andre the Giant, Stone Cold Steve Austin, Supafly Jimmy Snuka, are joined by modern legends like Undertaker, Rey Mysterio, Big Show, John Cena, and more. There are around two dozen in all to play around with, and they surprisingly feel and play differently according to their move sets and tendencies. I could easily name 20 more legends that should make the rounds for the sequel, but it was disappointing to not be able to play as Razor Ramon, Lex Luger, Ric Flair, Mick Foley and the like.

There are a smattering of modes to take part in, but the list is disappointingly sparse. There are three Paths of Champions to take on that have you climbing a ladder to an inevitable showdown for the title of your choice. The first path has you taking on legends to face Undertaker at SummerSlam, the second has you facing modern superstars on the way to a matchup with Randy Orton at WrestleMania, and the third has you and a tag team partner facing off against D-Generation X for the tag team championship. These modes are fun, satisfying, and filled with the cheesy interludes that make WWE such a guilty pleasure in the first place.

The other major mode is Fantasy Warfare. This mode is filled with predetermined matches between legends and modern superstars to determine who is the best at a given match type. For example, Andre the Giant faces off against the Big Show to determine who is the greatest Big Man, or Hulk Hogan vs. John Cena for greatest superstar. Every match pits a modern superstar against a legend. Each match is introduced with extremely well produced highlight videos showing off career highlights from each wrestler involved. It's a veritable treasure trove of WWE history that any wrestling buff will certainly relish.

Beyond that, there's a standard create a superstar mode, and a smattering of exhibition matches like Triple Threats, Fatal 4 Way, Steel Cage, and Extreme Rules matches. It's pretty disappointing that there's no standard tag matches, no ladder or table matches, and the most egregious omission of all, no Royal Rumble. In every wrestling game I've ever played that's worth playing, there has been a Royal Rumble mode. What possible reason could there be for not including it this time around? I suppose it's in the works for the inevitable sequel I suppose...

Depending on how much you intend to hit up the online modes, WWE All-Stars may not hold your attention beyond the initial weekend you pop it into your system. I completed all three paths of champions and every Fantasy Warfare match in two three hour play sessions. Your dedication to multiplayer should determine whether this is a purchase or simply a rental. It bears mentioning as well that the multiplayer modes are limited to what you have available in the exhibition modes. Those who want to play through the path of champions mode with a friend will be left out in the cold. Even in the tag team campaign, which makes little sense from a features perspective. Much like the Royal Rumble omission, I was left scratching my head as to why an obvious and necessary feature wasn't included. With that said, it's a lot of fun to play in a fatal 4 way match online with a friends/strangers.

I'd be remiss if I also didn't mention that the game has to load quite a bit, and the PlayStation 3 version of the game required more than a half hour of updates, installations, and data caching before I even could lay eyes on the title screen.

The presentation for the game is generally quite good, but not without some disappointing issues. I instantly fell in love with the art style for the game, which features incredible exaggerated character designs and cartoony facial expressions. The frame rate is smooth and the gameplay speedy. The arenas are also nicely detailed. On the flip side, the audience members look poor and low-res, and the 15-second entrance themes are simply not worth the extra loading time. The play by play by Jim Ross and Jerry "The King" Lawler is also repetitive and grates after only a few matches. In their defence, they do drop interesting trivia about the wrestlers involved from time to time.

If you fancy yourself any kind of a wrestling fan, do not let the flaws present here dissuade you from playing what is easily the most enjoyable wrestling game in years. Let the hardcore fans have their intense simulation. At its core, the WWE has always been about entertainment value, and wrestling games do not come much more entertaining than this. Just bear in mind that there's definitely some room for expansion and improvement in the inevitable sequel.