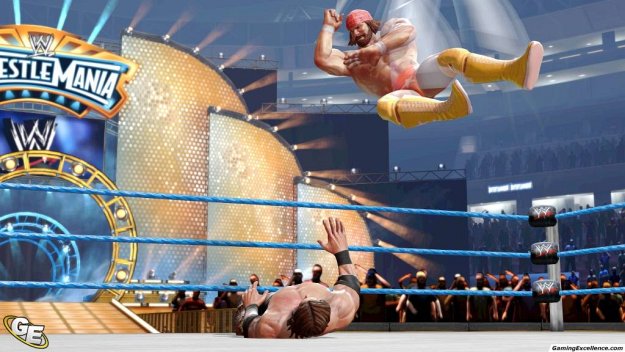 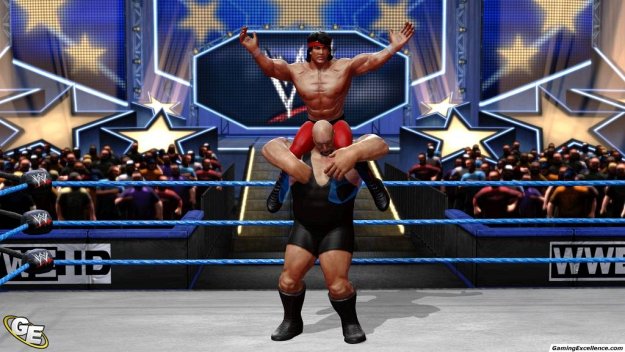 All the talk you had as a child of which WWE Superstar could beat the legends of the past can finally stop. You no longer have to keep asking yourself if Stone Cold Steve Austin could beat Hulk Hogan in his prime. That's because WWE All Stars is making its way to consoles to stop all the talk and put the questions in motion.

When you first look at the characters in the roster, you get the idea that realism has completely gone out the window. Chracter designs are greatly exaggerated.

They look like their action figure counter parts. All the characters have bulging muscles and even their facial expressions are over the top. The Ultimate Warrior constantly looks like he wants to bench press a bus. Even their facial expressions while performing special moves are overemphasized. While performing Bret "The Hit Man" Hart's finisher, The Sharpshooter, he points toward the sky like he is going to knock a ball out of the ballpark and has a great big smile on his face; like he is trying to win over the crowd. But he really doesn't need to do that. I mean, come on, The Hit Man was the best there is, the best there was and the best there ever...will....be.

DiVita has quite the history with these embellished characters. He was a game developer for NFL Blitz 2000 and worked on the NBA Jam remake in 2003. He also brought us WrestleMania: The Arcade game and this title really harkens back to it. The Arcade Game pretty much took out the wrestling and turned the WWE into some kind of fantastic fighter. One of the most memorable moments of gameplay was The Undertaker throwing out a barrage of ghosts stunning the opponents. WWE All Stars doesn't go that far, but you can feel some influence from it while in matches.

The action has even been supped up for this title. If you are expecting a technical wrestling game then there is some strategy to be had here, but it is not as technical as other wrestling titles. You have two face buttons for light and heavy attacks and the other two are for light and heavy grabs. Most matches involve trading blows back and forward before finding an opening to grab your opponent and slamming them down on the mat. And the punches do leave quite an impact on the opponents. There are some blows that will launch them a few inches into the air and the opportunity to land a few air juggling hits. However, these matches won't end as quickly as a regular fighting game.

"We wanted to put more wrestling into it," said DiVita. "Just winning after health is gone isn't wrestling."

And the wrestling is there: to the Nth power. During a match of The Game, HHH and The Rattlesnake, Stone Cold Steve Austin, trails of light came out of wrestlers when initiating a signature move. As Austin slammed me to the mat, my body bounced a few feet in the air. After turning the tide a bit in the match, a meter next to my profile pic with a F inside a star filled up and began pulsating indicating that I had enough energy to perform a finishing move. When going for the grapple, the light trail changed from blue to gold. The background then had a golden hue and picture flashes went off in the distance. As HHH locked Austin's arms in position, I got excited for what was going to happen next. HHH lauched his finishing move, the Pedigree and launch is the correct word for the occassion. Rather than just jumping a few inches off the mat, he skyrocketed into the air catching as much hangtime as Scottie Pippen while being on fire in NBA Jam. At that point, the action goes into slow-motion and I could have sworn I heard the Six Million Dollar Man sound effect when he activates his powers. As Austin's body crashes back down to Earth, he rebounds off the mat into the air while a shockwave reverberates on the ground. If your opponent's health is flashing red at the time, then you score a knockout and an automatic win.

And these finishing moves aren't just regulated to the ground. There were quite some high flyers back in the day. The Macho Man Randy Savage backflips onto the turnbuckle and flies even higher into the air to land his famous flying elbow. These guys moves aren't the things you see on TV. These are brought to you by the imagination and visions of people who truly believe bigger is better. It almost feels that I could have come up with these things. There were countless times when I was a child where I had my wresling action figures flying high in the air, launching them from the top of my bunk bed believing it to be a ring with at least 5 steel cages stacked on top of each other. Some of these matches and moves that the wrestlers are performing are literally out of the corners of my mind.

THQ is really developing something with this latest wrestlnig title. As their tagline goes for the game: "The greatest matchups haven't happened...until now." Come March 29th, these matchups will finally go down.