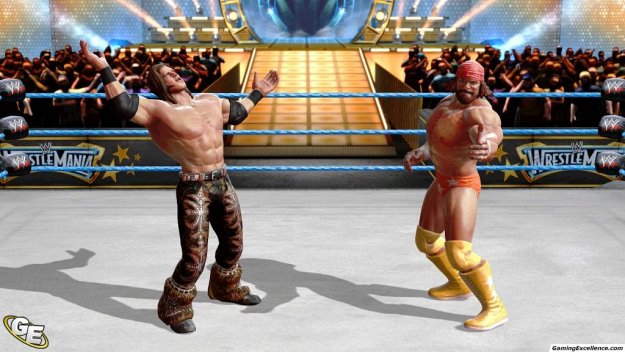 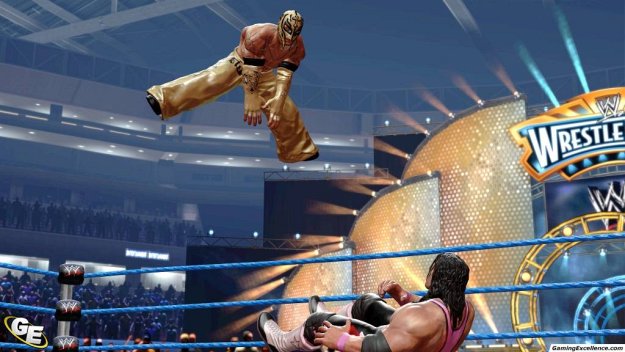 Many people are familiar with THQ's longstanding wrestling series, WWE Smackdown vs Raw, and a portion of those have been alienated by the increasing complexity of the control scheme. While attempting to please die-hard fans looking for ever-increasing variety in the game, developer Yuke's seems to have ended up with a game manual worthy of modern PC flight simulators. THQ's brief attempt to revitalize the series amongst more casual fans, by reviving the whole cast of superstars in last year's WWE Legends of Wrestlemania, was promising but probably didn't quite hit the mark.

While the franchise lives on in its current core market-pleasing complexity, THQ's San Diego studios are taking another stab at expanding the fan base. WWE All Stars was unveiled at this year's E3, offering a much more fluid wrestling experience and, most importantly, simpler controls. Like Legends, this title will feature superstars both past and present, though likely won't go as far back as Wrestlemania I. And that's really where the comparison between the two ends.

All Stars is about taking the raw appeal of the wrestling events, and exploding the proportions. This surfaces in the most obvious of ways: superhuman character models, with muscles more artificially over-inflated than Anna Nicole Smith's hair**. In fact, if you just changed John Cena's skin colour to green, you'd be playing as the Hulk (I think it might be a secret unlockable). Actual character moves were also used as the basis for many animations in the game, though again with a significantly exaggerated theme.

Now you might think the hyperboles end here, but there's nothing subtle about this game. The gameplay asks that you take everything you know about real-world physics and stick it in a nearby fish bowl for the duration of the experience. Start with a dash of snake-like speed; sprinkle some time alteration; add a few rocks, papers, scissors, lizards and Spock (just the one); and then mix it all in a low gravity environment. OK, descriptive hyperboles aside, this game is over the top in absolutely everything it does. It's closer to a Street Fighter or Mortal Kombat game than anything based in the "real" world of wrestling. Attacks are lightning fast, and can propel opponents halfway across the ring. Slamming opponents onto the mat will cause it to recoil and propel limp bodies ten feet in the air. This provides opportunities not often seen on TV: the ability to grab said limp bodies in mid-air, and inflict some additional pain before, and possibly during landing. And just in case you would be unfortunate enough to blink during this insane action sequence, most epic moves happen in slow motion so you can inspect the bone crushing in all its splendor.

The controls in All Stars are very simple. Each of the four face buttons corresponds to a different attack move, split between jabs and grapples, and there's no longer any bizarre use of the right stick. Of course, there's still the ability to block using one of the triggers. The mechanics are once again reduced to a game of rock-paper-scissors between those three fighting options, because the target audience for this one likely won't know each other's fighting styles well enough to get into the 75-80% predictability range. You can also "charge up" an attack and, if left undisturbed long enough, your swing will not be repelled by an opponent's block. Now it wouldn't be a wrestling game (or a true Mortal Kombat comparison) without special moves and finishers, but these are basically stronger attacks with much flashier and exciting animations, which also deal a whole lot more damage. You don't need to wrack your fingers into a mini Twister game either: attacks fill up your power bar and a single button can activate the special move.

THQ wouldn't say what match types they'd actually included in the game, instead choosing to reiterate what we'd already assumed: "you can expect plenty of over-the-top match types." One thing's for sure; this game is much more approachable to fans of the shows that just want to pick up a controller and watch some more unbelievable fighting. Match types can only add to the fun and replayability of a title which has already met its goal. Fans should keep an eye out for this one in early 2011.

No goldfish were harmed in the making of this review.