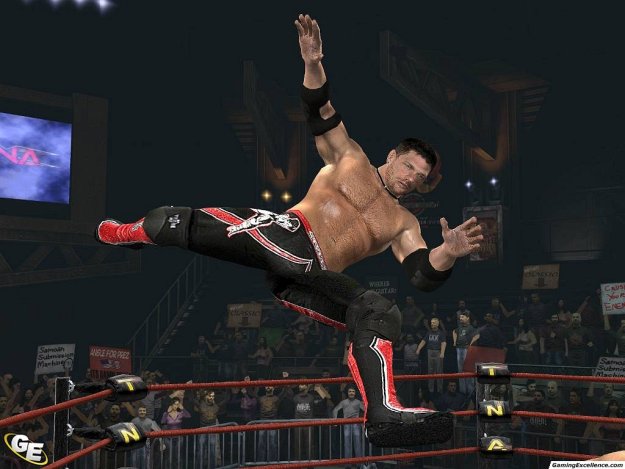 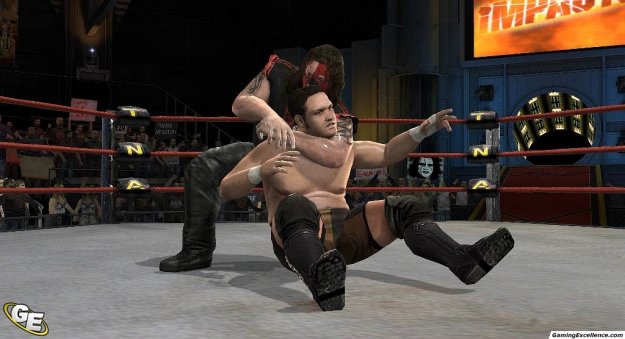 One of the more anticipated titles emanating from Midway's booth at X'08 is TNA's first foray into the world of video gaming. The WWE and THQ have had quite a monopoly for the past few years being able to churn out titles annually. There has been a void of serious competition to wrestle (no pun intended) the crowds of wrestling and gaming fanatics towards something else. By this September TNA (which stands for Total-Nonstop Action) Impact will help provide the wrestling gamer who believed they had everything with an alternative, but the question remains will it be a good one?

TNA Impact borrows quite a bit from its WWE competitor with some similar gameplay mechanics and style. However, the WWE games that TNA is taking a page from is not the Smackdown series of today, but more akin to the Nintendo 64 wrestling titles which surfaced almost a decade ago. The game is slower pace than what people have become accustomed to with Smackdown. If the WWE title is more arcade-like, then TNA's offering is unquestionably more simulation. Impact offers you a punch and kick button, a weak and strong grapple, as well as a run button, a taunt button and counter button. The analog stick which has become an absolute revelation for the Smackdown games in opening up a wealth of grapple maneuvers, as well as other techniques is stoic in Impact, it controls your wrestler. It's simple but does make the move sets of the TNA guys feel limited compared to the WWE's crop.

While the control is generic and thus provides a somewhat narrower learning curve than Smackdown there were a few noticeable hiccups that made pulling off what should be basic actions more problematic than necessary. The most glaring offense to note would be the ability to perform a wrestler's finisher. For example to connect with AJ Style's phenomenal finisher you need to have your opponent in a strong grapple and then press one of the attack buttons (in this case a punch), you cannot press the buttons at the same time or, one right after the other, there has to be a steady flow between the actions for the move to register. Granted, the move looked great when done properly; it feels more strained than the one button finisher sequence found in Smackdown. This fluidity of button presses is also similar when picking up weapons and pinning your opponent, so gamers use to mashing buttons won't get very far with Impact.

The types of matches available in Impact are plentiful yet standard considering what the Smackdown games have been able to offer. You have your single and tag matches, which provide various parameters and then you have your specialty matches such as hardcore and submission. The one match type I was excited to play through was the Ultimate-X match. An original and innovative looking specimen on television, Midway has done a formidable job of recreating the experience to fit on your video game console. The purpose of the match is to have your wrestler ascend the turnbuckles of the six-sided ring and crawl along the tight rope high above where a big X is waiting for you to remove it. Doing so requires some persistence because it'll take multiple attempts to bring that sucker down. The process is a considerable throwback to the N64 wrestling games of yesteryear and doesn't feel too out of place here.

One mode of play that was not available is the much hyped, yet equally secretive career mode. While the Smackdown games have had a dearth of different season/career type modes ranging from practical to nonsensical, TNA's offering is certainly intriguing. You play the role of a generic wrestler who goes by the guise of Suicide. Supposedly you have been struck with amnesia and your goal is to find out what the heck happened to you and along the way, become the TNA Heavyweight champion of the world. What makes this more unique is talk that the wrestling federation actually plans to carry a storyline out with the Suicide character in real time. Say what you will about the storylines that have been used in the Smackdown games in the past, but TNA's debut season mode at the very least appears to be engaging and it will be very interesting to see how it unfolds, both in game and on television.

While the gameplay and controls may have its detractions, there is one area where Impact will make a lasting impression on the majority of gamers, its visuals. Impact looks absolutely stunning in virtually all facets. The characters look true to their real life counterparts and Midway has gone a long way to give each wrestler the individuality they deserve. This is something that cannot be said about THQ's WWE models where some wrestlers are guilty of looking identical in shape while others just look a little bit too pretty compared to what they really look like. It is also a welcome feeling seeing some wrestlers make their video game debuts such as Samoa Joe, Abyss, and The Motor City Machine Guns amongst others, while others grace their inner polygons for the first time in years such as Sting and Jeff Jarrett. The roster is not as deep as Smackdown's, and in this particular build there was not a single TNA Knockout to behold, but overall all your perennial TNA favourites are here and are ready to get it on in the beautifully designed Impact Zone.

The WWE and THQ had a few years of peace and tranquility without fear of having gamers alienated towards other titles, but that can longer be said. TNA Impact is shaping up to be an excellent looking wrestling title that fans of the federation would be proud to call their own. A few tweaks in the gameplay and Midway might be able to compete with THQ's wrestling juggernaut every year from here on in.