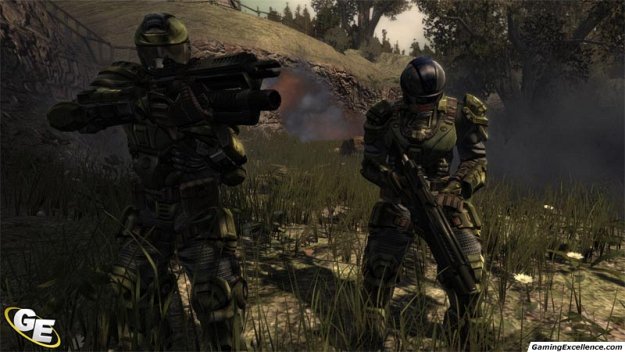 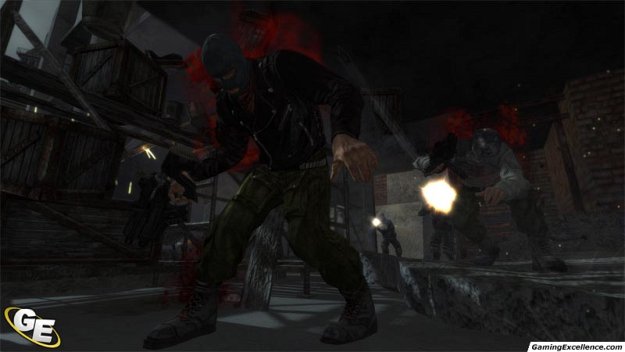 Last year was a big one for first person shooters. Gaming juggernauts such as Halo 3, Call of Duty 4, Crysis, BioShock received critical acclaim for helping make 2007 one of the industry's biggest years ever. With so many hits in one genre, it makes it easy to distinguish the great games from the mediocre ones. Unfortunately, Timeshift falls under the category of the mediocre. Here is a game that fails to do anything extraordinarily well in order to propel it to "hit" status.

Timeshift was developed by Saber Interactive and after a long development cycle with numerous publishers and delays, finally hit shelves in late 2007. Shigeru Miyamoto's famous "A delayed game is eventually good, a bad game is bad forever" quote doesn't quite fit Timeshift. The game suffers from several drawbacks that'll make you wonder what Saber was doing for so long.
As the title suggests, Timeshift revolves around using the ability to alter time. This isn't a new invention by any stretch of the mind, as it has been used in past games such as F.E.A.R. and the Prince of Persia series. Timeshift also doesn't re-invent the wheel when it comes to using these powers either - you can slow, stop, or reverse the flow of time. Unlike in Prince of Persia, however, you can't rewind time and save yourself from death. This makes the "reversal" power kind of useless, as it is only used a handful of times during the game, such as when you get stuck with a plasma (otherwise known in Timeshift as a "clutch") grenade, and want to un-stick yourself before it explodes.

Although you won't be reversing time too much in Timeshift, you'll definitely be pausing and slowing it down a lot. So much, in fact, that it makes the game seem a little too easy. Every time you are gunning down enemies, you can simply freeze time, take aim with your torque bow…ahem, with your "Thunderbolt", and shoot each enemy once and watch them explode. Take cover, wait for your Timeshifting bar to refill, and do it again. Your suit's AI will also tell you which power is best suited to your current situation, making the power you need for a certain puzzle "hotkeyed". You can still manually pick whatever power you want, but the puzzles go from easy to incredibly easy with the AI doing everything but pressing the button for you.

The storyline in Timeshift is at best confusing and at worst, non-existent. The story is (kind of) told through short cut scenes spread randomly throughout the game. I'm not sure if Saber is trying to do some complex "the game is about time, so we'll present the story in an untimely way" type of thing, but it doesn't work. Heck, you won't even know your characters name unless you read the instruction booklet. Luckily, the story has little to do with what you are actually doing. Most of your mission objectives are to "go here" and "open this gate", which makes it difficult to want to keep playing.

After you've beaten the lengthy campaign, Timeshift has a host of online options. There are the standard deathmatch, team deathmatch, and CTF game modes, as well as a few novelty ones. The way Timeshift involves the time-altering mechanic into the multiplayer is what makes it fun. Instead of each player having the ability to stop, slow and reverse time, there are weapons called chrono grenades which create spheres that slow or freeze time in an enclosed area. It's an interesting idea that works fairly well, and is probably the most innovative feature in Timeshift.

Stopping time does offer some unique perspectives of the world of Timeshift, especially the physics, which are very well done. Numerous times, a bad guy will jump over a crate head first, giving you a excellent opportunity to freeze time, blast him with a couple of shotgun rounds, and watch him fly backwards realistically once time flows again. Trust me, this never gets old. Freezing time also shows off the visuals of Timeshift, more specifically, in the levels with rain. The weather effects look stunning, and stopping time to see each individual drop is quite breathtaking the first time you see it. Not all of the game keeps this high of a visual standard, however, as some levels are quite bland looking. The games audio also never takes center stage, as the music is often dull, and the sound effects repetitive. You can only listen to an enemy saying, "Where did he go?" so many times before it gets old.

Timeshift starts off with a bang, with impressive visuals and God-like powers at your fingertips. The bang, however, fails to last throughout the game, and you'll constantly find it harder and harder to keep going. Beyond the been-there-done-that mechanics and un-motivating story lies a fairly standard shooter that fails to make a name for itself under a barrage of better first person shooters.