A special episode for the Walking Dead series by Telltale games, it tells the story of five different survivors as a segway between the first and second seasons in the series. It introduces characters that are meant to have appearances in the second season.

Telltale tries to whet our appetite for grief, misery and zombies in this decently constructed DLC that bridges the gap between Season 1 and 2 of the Walking Dead series. Thought you got off easy? Well the zombie apocalypse is back, bringing back a taste of the pain and suffering we loved in Season 1. Read More. 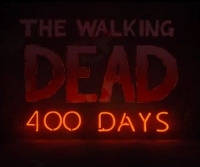