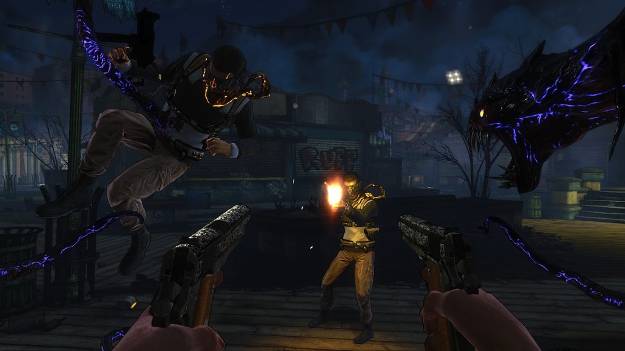 Usually when I preview a title, which I've done over a hundred times at this point, I mention the visuals at the end with a small blurb about how good or needing improvement the graphics are.

I mention this up front, because the amount of effort and artistry put into The Darkness II is simply striking. Based on a comic book series of the same name, the artists at Digital Extremes behind The Darkness II have painstakingly drawn every single texture in the game by hand. The result is simply striking. Not quite cel-shaded and not quite realistic, the game has a unique look all of its own, and looks great in the process.

The game picks up two years after the events of the Starbreeze developed original. The main character, Jackie, is still infested with a demonic presence known as "the darkness" that essentially gives him two extra snake-like appendages, complete with glowing eyes and razor sharp jaws. Jackie is being chased by a cabal of enemies known as The Brotherhood that wants to acquire the darkness for its own leader, Victor Valente.

Having the darkness essentially gives Jackie the ability to "quad-wield." He can hold guns in each of his human hands, while his extra appendages can do things like melee strike, pick up debris to use as shields, toss poles and other environmental items as impaling javelins, and grab enemies and rip them in two. Killing enemies in a variety of ways with both the appendages and his guns gives Jackie experience to level up abilities that the developers are calling "gun-channeling." The skill tree moves in four different directions, giving you a plethora of powers to adjust and level up throughout the game. During our demonstration, the developers showed us the ability to see and shoot through walls.

The AI in the game was also very solid. The effectively flanked and used a variety of tactics to get to Jackie. Given that Jackie's powers are driven by darkness, your enemies will fight you with light. When you enter a light source, you lose your extra appendages and extra powers, forcing you to rely on your guns and your smarts during those moments. Hopefully the developers are able to find the right balance between standard gunplay and giving you full reign over your powers.

It seems that Digital Extremes was able to capture the essence and sheer fun factor that was present and accounted for in the underrated original. We'll find out for sure when the game is released on Xbox 360, PS3, and PC in early October.