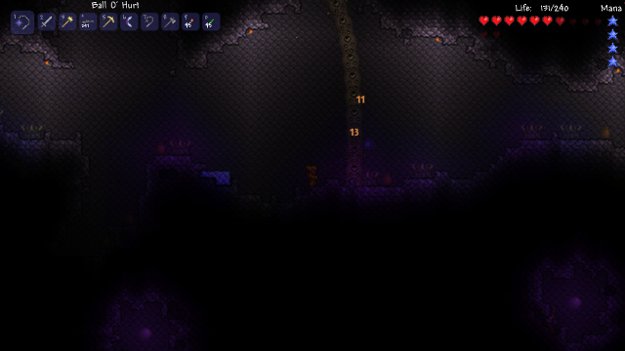 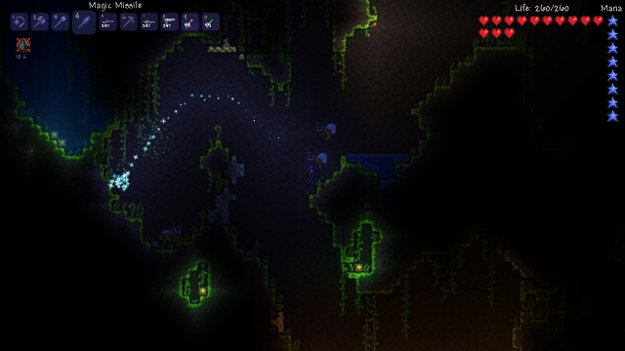 When I purchased Terraria about a year ago off of Steam I found myself kind of unimpressed. It’s not that it was bad but after all the talking up people I know had done I expected something more than I got. What I had expected to be a game in the vein of Minecraft turned out to be a kind of average PC game with a few neat ideas. So it’s not like I expected the console version to be fantastic. But what we got ends up taking an average experience into the realm of pure aggravation.

Many people like to compare Minecraft and Terraria. These people are dumb. Jokes aside the two games have very little in common. Minecraft is all about adventuring just enough to get the tools to build stuff and then adventure some more to get better stuff. Terraria is all about the adventure. Oh you build stuff sure but really what you’re doing is more creating shelter, places to hide your allied NPC’s away from the dangers of the great wide world or mining for the ore needed to create better weapons. You’ll spend the majority of your time warding off enemies, killing others for their rare loot and battling dangerous bosses to get even better rewards. 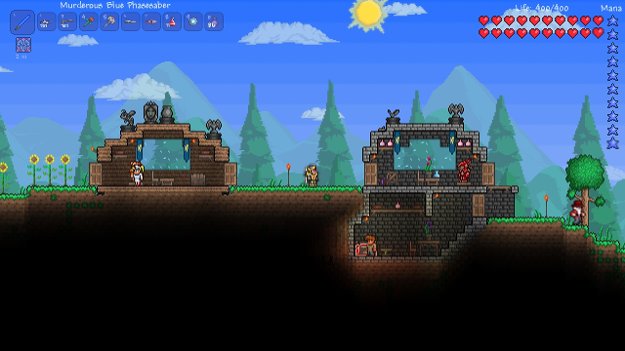 The problem with Terraria is that the game just gets ridiculously repetitive. You could say this about a lot of games of course but due to the way that Terraria is set up you’re going to be doing the exact same things since the very beginning of the game. Beyond a few interesting weapon types or the ability to start using magic spells later on there’s such a small amount of variation that what you do here gets

Whereas in Minecraft you can create safe zones that allow you to mine in peace or work on building projects these are fairly prohibitive to create in Terraria. Almost any area that you create will allow enemies to still spawn inside of it unless you literally wallpaper light sources over every wall, floor and background pillar.Then you mine out ore, bring it back to base, create new equipment, go back down and do it over until you have the necessary equipment to fight a boss. Then you start it over yet again with an eye towards the next boss. Finally once you’ve dug all the way to the hell and beaten the monstrous Wall of Flesh you get to start all over again with new monsters, ore and items available due to the difficulty bump the world has taken. That right there is all there is to Terraria.

However there is still something addictive about the gameplay if you enjoy this sort of grinding. It is a fairly action packed experience, especially when dealing with the very large and very dangerous bosses. Crafting or looting the tools to defeat them and then doing so can feel immensely rewarding especially when you’ve come up with a great strategy that lets you do so without high end equipment. That plus the three ways to play the game (melee, archer or spellcaster), the ability to use the same character in several worlds at once and how easy to pick up, yet addictive the game is, will make the game quite compelling to some.

Unfortunately even that is marred when you play the game on the consoles. See these bosses are tough. Not just kind of tough but almost unfairly hard unless you know exactly what you’re doing. But on PC it’s very easy to find others to play with so you can simply overwhelm the harder bosses with numbers. However you likely won’t need the help as the mouse and keyboard controls are light years more responsive and easy to use than the controller. It’s easy to swap items on the fly while dodging enemies, healing, fighting and manually aiming ranged attacks and spells while this is just not reasonable on the console. This makes the hard mode bosses just insanely frustrating to fight. 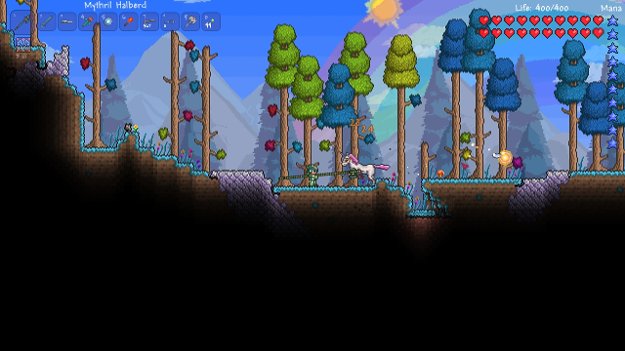 Worse than the control issues is the fact that the game has numerous massive bugs and glitches that make this game insanely frustrating to play. Terraria is a complete mess of bugs that make the game quite a trial. Even better is that you can play this on hardcore mode (die once and lose the character), hit a bug that costs you your life and lose hours of work to a bug the developers just never bothered to fix. As a matter of fact the glitches with the Wall of Flesh boss, the one that blocks off the second half of the game, are so numerous that it took literal weeks of playing the game to just get the damn boss to actually appear in a way that he can be fought without instant-killing me. Great times. Now the bugs in the PC version were a fact of life but there you could rely on using modding tools or game editors to fix problems.

That’s not even getting into the fact that grinding has made the game even more aggravating to play on consoles. Grinding for loot is a pain in the butt that is simply a fact of life in Terraria if you want some weapons / armor. So, for some insane reason, the developers decided that the console exclusive enemies should appear in place of enemies that have incredibly rare loot. These enemies are basically just palette swaps of the enemy that they’re replacing except that they don’t drop that super rare loot that you’re looking for. So basically they serve exactly no purpose other than to make getting rare loot even more annoying.

Honestly the only reason to buy Terraria on the console is if you don’t have the PC version and are interested in the console exclusive boss and equipment. For whatever reason the developers decided they wouldn’t be porting this extra content to the PC version, giving the finger to their early adopter fans as game developers are so fond of doing these days. But if you want to actually enjoy the game then just play it on the computer and spare yourself some grief.