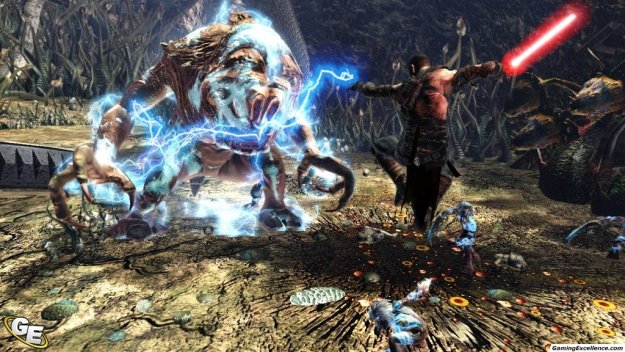 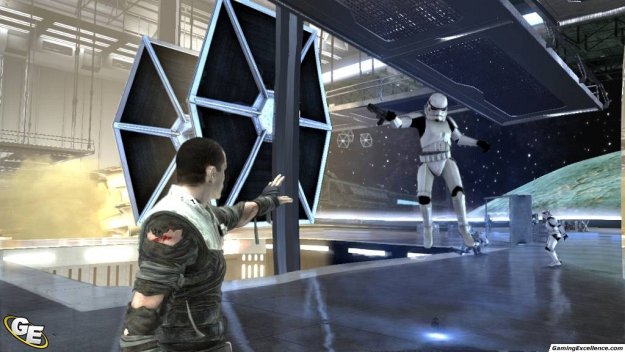 Star Wars and I have always had something of a love-hate relationship. The truly great titles in the franchise such as Tie Fighter and Knights of the Old Republic stand tall in comparison to the best of the films. Conversely, the worst of the games are such a big load of bantha poodoo that it makes me long for JarJar Binks' mind numbing voice just for a change of pace. Fortunately, The Force Unleashed is looking like the best Star Wars action game in… well… a long, long time ago.

The whole point of the Force Unleashed is essentially to "kick ass with the force". You could call the game a Storm Trooper/Rebel/Wookie torture simulator. You begin the game as the baddest of the badasses, Darth Vader himself, sometime in between episodes III and IV. You are instantly given command of a wide array of force powers, including lighting, push, and choking powers. After only 45 seconds of flailing Wookies around, listening to their terrified… whatever you call those noises that Wookies make, I was completely hooked.
`
After making your way through the first level, Vader finds a small boy with an affinity for the force. Before the storm troopers are able to kill the boy, Vader slaughters all of them and takes the boy on as his secret apprentice. Since you're on the empire's side in secret, there are no friends. This is a time in which the Jedis have been slaughtered by the empire and the few remaining have gone into hiding. Therefore, you are on your own, with nothing but the force as your ally.

Oh, but what a powerful ally it is. Anything from the smallest droid to the biggest Tie Fighter is movable with the force. Also, the game features a detailed environmental destruction model that breaks things down on the molecular level. This means that nothing breaks truly the same way twice, and uses real world physics in conjunction with the fantasy world of Star Wars to a thrilling effect. When combined with the outstanding graphics engine (Vader's cape is a real wow!), it's safe to say that the game is no slouch on a technical level.

The Force Unleashed is slated for release on every major platform, including the Xbox 360, Wii, PS3, PSP, and DS for September 16th of this year. Picking up our Best Action Game of E3 award, the Force is strong with this one.