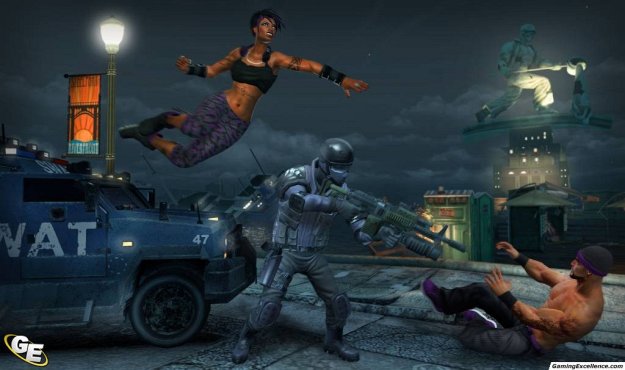 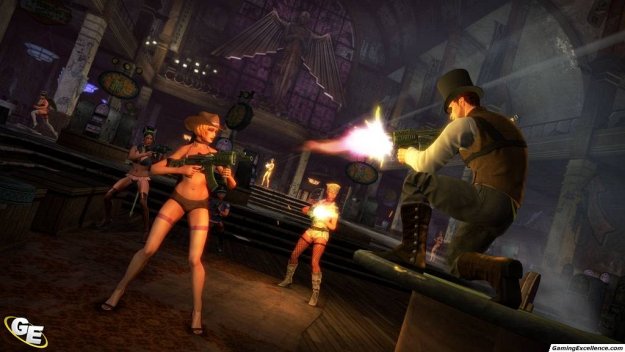 One of the sometimes frustrating aspects of covering games in today's day and age is how seriously the industry takes itself in the never-ending struggle for utmost realism. Fortunately, some developers, such as Volition, have taken modern physics and graphics tech, and applied them to an out and out Bugs Bunny cartoon set in a huge open world.

When we sat down in THQ's darkened theatre to take a look at Saints Row The Third, we really didn't know what to expect. If past Saints Row instalments have taught us anything, its to expect the unexpected. Within roughly six seconds, it was obvious that this title isn't just another Grand Theft Auto clone. The developers at Volition have gotten the memo that the things that gamers want to do most in an open world game is to break all the rules, and the city of Steelport is a place where rules go to die.

A quick run-down of the things we saw in just the first five minutes of the demo: The main character body slamming, face-planting, and nut punching pedestrians. We saw him dance with a prostitute on the street. We saw him call in an airstrike into a crowd of luchadores. Then he jumped into a car through the driver's side window (because opening the door "would take too long"). We saw him put on a space suit, jump into a harrier jet, and carpet bomb a city block. Then he ran down a city block with a giant sex toy and used it to beat randoms on the sidewalk. Then he jumped into a truck with a giant cannon on the back called the man-o-pult, used to launch poor saps into the side of buildings. Then the character jumped into the cannon and launched himself three blocks down the street.

Suffice to say, the game has everything except the kitchen sink, unless it's a realistic kitchen sink, then its not welcome to the Saints Row party. It's so over the top that the top is just a dot to this nutty experience.

While we didn't get an actual hands-on with the gameplay, it was clear that the handling of the vehicles (both flying and ground based) was smooth and easy. Customizability was a huge factor in the game as well. You can dress your character almost anyway you'd like from space suits, to cross dressing, to buck naked.

Speaking of dressing oddly, the second half of the demo involved robbing a bank. Pretty standard for a crime based open world adventure, sure. That was until the characters dressed up as bobble heads and found themselves up against a firing squad of tellers armed with automatic weapons and itchy trigger fingers. It only got weirder from there when one of the bystanders in the bank asked for the main character's autograph while ignoring a celebrity method actor fighting alongside you. Before long, the bank's entire safe was latched on to a helicopter with you standing atop the massive metal structure. Things start going downhill as the security forces come pouring out of the building as the player character spent equal time tumbling along the moving safe, hanging on the ledges, and spraying bullets towards the security forces. Eventually, the robbery doesn't end well, with the player character down on his back with a dozen assault rifles pointed at him. Judging from how realistic the game was at that point, I'm sure he could take a couple of dozen hollow points to the face and walk it off.

As a side note, the frame rate for the game was very smooth, and the cartoony graphics did a kind service to the ridiculous action on screen.

In case it's not blatantly obvious, Saints Row The Third is truly what video games should be all about; namely ridiculous, fantastical action that provides an escape from reality rather than trying to emulate it. To coin a phrase used by THQ's marketing team, gamers will be able to "strap it on" PlayStation 3, Xbox 360, and PC on November 15, 2011.