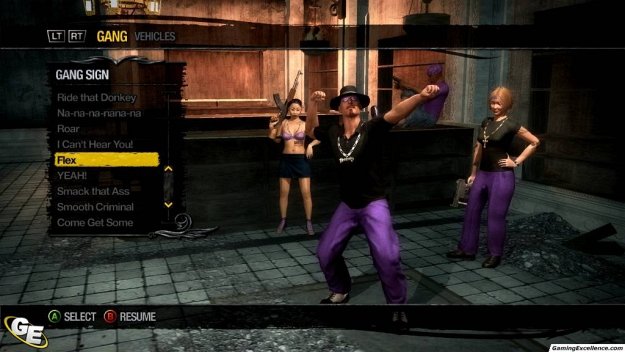 Two years later and no word of a cease and desist from Rockstar games yet. So here we are reviewing Saints Row 2. In all honesty, the Saints Row series is finding its niche target within the free roaming crime subgenre. It will appeal to those who felt the hastened gameplay of GTA: Vice City, and/or San Andreas was more appealing than that of GTA IV, albeit without the auto-lock aiming. It has its own sense of humor and its customization options give it the feel of a Sims for gangsters.

Volition has continued with the same amount of sickening detail as in the original, raising the bar on themselves with the character creation and modification from two years ago. The single player story begins in a prison medical wing with your character about to be unveiled from beneath a mummy-like set of bandages. Prompt the character creation mode (which you can change later at the plastic surgeon in town). You'll be setting his or her race, age, height, weight, walk, talk, fighting style, facial expression, hair , facial hair (yes, on her too), clothing, eyebrow thickness, chin width, brow height, and everything else short of being able to scanning your body and mapping your entire existence onto your character. Later you'll be able to buy layers of customized clothing including under shirts, over shirts, coats, underwear, socks, pants, shorts, belts, shoes, and hats. Don't forget that you can get inked just about anywhere you like. How about getting iced out with rings, earrings, necklaces (short and long), and pendants? Don't forget that each piece of clothing has multiple styles, and custom colours, and that all jewelry comes in steel, bronze, silver, and gold.

After breaking out of jail you meet back up with an old pal and decide that the Saints will not be eliminated quietly. You'll start to recruit to take over Stilwater once again. The story is then wide open, with activities in every corner to earn respect. You'll need one level of respect to move on to the next mission but the selection has gone up since the original so there definitely isn't a shortage to be earned. Familiar activities include snatch, mayhem, hitman, chop shop, escort, racing, drug trafficking, and demo derby. Some of the new activities include Fuzz, Trailblazing, Fight Club, and Septic Avenger, although most of the returning activities are also slightly modified from their originals as well. Fuzz has you impersonating a police officer to gain incriminating footage for a 'reality TV' series, trailblazing will set your vehicle on fire and place explosive and flammable materials in your path (always a good time), the rest are quite self explanatory (fighting and throwing poo). Doing enough levels in each activity will earn you permanent skill sets such as increased melee damage, decreased injuries from bullets, and faster depleting notoriety levels. The story continues through three sets of rival gangs; The Brotherhood, Sons of Samedi, and The Ronin. Domination will not come easy and you'll have to protect your turf from time to time, but not too often so that it doesn't become annoying. Nobody likes to back track too much.

The story in Saints Row 2 has just as much addictive quality as in the original and will pull you in time after time until you've exhausted the mission list as well as done each activity more than once. Money comes quite easily in Saints Row, with just about every business having the ability to be bought out once you've won over the surrounding territory. Each business you buy then earns you a certain amount of cash per day. Each one costs about $3000-$10000 to buy but will return $200-$500 a day, making it a no-brainer to purchase everything in sight. You'll find all the weapons you need off the corpses from missions, and style points still come into play when trying to earn respect.

Saints Row 2 plays much the same as its predecessor. Free aim shooting, arcade style driving, jumping over fences, as well as its very quick and effective weapon and health selection menu. There are a handful of new weapons as well as being able to dual wield pistols and SMG's. You're able to fly planes this time around, including helicopters, business class jets, and even old fighters. You'll be able to store all your hard earned vehicles in SR2 as well, earning garages for cars and motorcycles, a dock for boats, a pad for helicopters, and a hangar for jets and planes. The vehicle you're driving doesn't duplicate around you magically at all anymore. Rag doll pedestrians are still just as any other game, and hitting cars so hard the occupants are thrown is still entertaining too. The amount of destructive objects strewn throughout Stilwater never ceases to amaze either.

It all comes down to the fantastic game engine developed by Volition. With such a firm stance with the original, it makes for easier work producing a second great game. The content may be similar, but it's still fun. There's always something to do, and that something is always done at breakneck speeds which makes SR2 extremely hard to put down. The mass amount of content does make it tough to polish the entire title though, so you'll notice minor animation errors, overlapping objects in your clothing, and the absence of water effects such as a spraying hydrant not being affected by any vehicle or vice versa on a person. The quality to quantity ratio is pretty even though, so this should be easily looked past by most. Things like customizing your gang to look like ninjas and letting them drive whatever vehicles you choose is far more noticeable than say, a floating rasta cap.

The visuals are still fantastic. Your car will become charred, dirtied, or covered in sewage at some point in the game. Rainstorms will limit your visibility and drinking booze or smoking a blunt will alter your senses, wobbling the camera slightly. As with everything else, explosions have gone a little more on the arcade side (opposite to GTA IV, which went in a slightly more realistic direction with slower driving and less health). You can take a hit like a champion, so don't expect to die too often. The most you'll get smoked is when facing off against the head of each gang. Blood splatters are bigger and better than ever, and you can grab just about anyone and use them as a human shield, or throw them to the curb. The car selection is well over forty vehicles, as you are to collect thirty-two just for the chop shop activities. Shooting enemies and driving at the same time always proves a little difficult so having a cruise control button comes in handy quite often. Cruising around you'll notice the world of Stilwater is recognizable in style but not in layout. The size of the world is still very large, and there are just as many if not more buildings to walk into. As is the industry standard now, there are no loading times. The only time SR2 will chug along is if you have about twenty or so enemies on your tail and you shoot down a helicopter while smashing into a roadblock, thus all action converging on one specific spot.

The original Saints Row had a promising multiplayer mode but really lacked in execution. Some of the disappointment stemmed directly from the lack of players online. Although my multiplayer experience with Saints Row 2 was limited to an evening with the Volition Dev team and a couple guys from other gaming publications, it was extremely fun. SR2 boasts sixteen players online, and the new Strong Arm mode is worth the cost of the game itself. In Strong Arm, teams compete in random game types in specific areas of the map. The game warns a new type is about to begin, it then points to the area you need to be in to start the mode and what you need to do. These tasks can include Insurance Fraud, Racing, plundering goods, mayhem, or even tag domination (much like king of the hill except with spraying graffiti tags and protecting them). Without spoiling too much, multiplayer will bring a huge amount of replay value to SR2. Aside from the Strong Arm mode, Saints Row 2 introduces open-world co-operative play for up to two players. Players are completely untethered and can wander around Stillwater independently as they place. The best part about co-operative play is that the entire game, including every mission, can be played with a friend - adding a ton of replay value.

The ear candy is just as prevalent in SR2 as it was in the original. With a huge list of licensed Hip-Hop, Classical, Easy Listening, Electronica, Metal, Reggae, Rock, and Funk, you'll always be humming to a catchy new song. Custom playlists can be made on the spot from purchased material and play under the "My Audio" channel. Select artists include Nas, Run DMC, Beethoven, Three Inches of Blood, Lamb of God, MSTRKRFT, Deftones, Hot Hot Heat, Kasabian, and many more. Passerby cars still emit the sounds of their favorite radio station, guns still clap like thunder, and the voice acting is still fantastic.

Once again, from every angle, Saints Row 2 is golden (shiny like the box). You'll drive around and conquer Stilwater for many hours to come. Once that is done you'll fully enjoy the Strong Arm mode online with friends, or hang out with a friend and play it through again co-operatively. For those who can't wait for the next GTA, and for those who enjoyed the first Saints Row, this game is a must have.