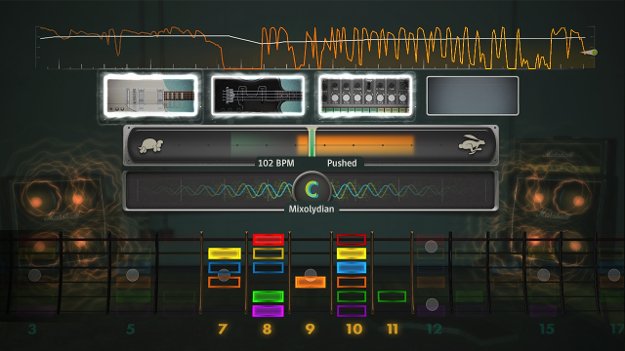 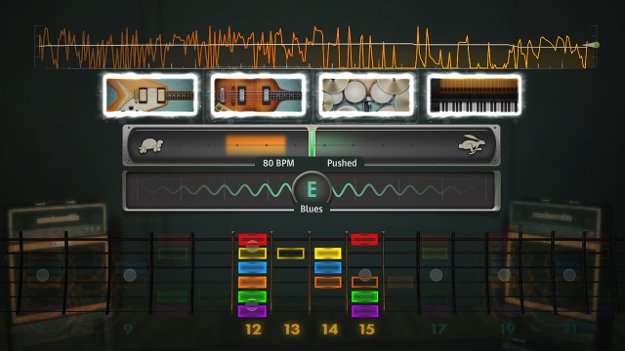 I think the plastic instruments have come out of my closet for the last time. Guitar Hero and Rock Band have had their well deserved moments, but now there's pretty much no excuse for playing with some plastic guitar shaped game controllers when there's a game that's not only a blast to play, but will actually teach you how to play a real musical instrument at the same time.

For those who are unfamiliar with the game, RockSmith allows players to plug in a real guitar to their Xbox 360, PS3, or PC with an included cable with a quarter inch guitar plug on one end, and a USB plug on the other. The software then detects the notes and strings you're hitting with surprising accuracy on either guitar or bass. Through a combination of lessons, well thought out game mechanics, retro-styled minigames, and a killer track list spanning many eras of rock music, RockSmith makes the worst part about learning how to play guitar (the clumsy first strums) fun instead of being discouraging and frustrating. 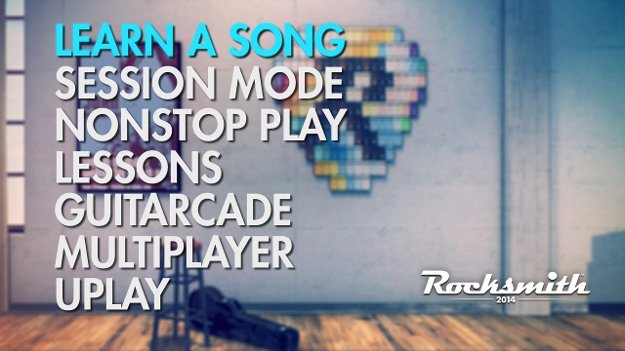 Using gameplay mechanics somewhat similar to Guitar Hero, the core of the RockSmith is that it learns about you as a guitarist while you're learning guitar. Notes in songs early on will come slowly and sporadically. As the game detects that you're hitting the notes effectively and quickly, it will gradually bump up the difficulty in real time until you find yourself playing the real song. Everything else in RockSmith stems from this brilliantly subtle system that rewards progression with greater challenges.

I was rather excited when RockSmith 2014 came to my mailbox for review. Being involved in the Toronto indie music scene as a photographer has really rekindled a long held interest in music, but it can be rather intimidating to try and pick and up learn guitar, especially if you find yourself around musicians a lot of the time. Thankfully for all of its technical achievements and accomplishments in digital teaching techniques, the greatest victory of RockSmith is that it presents an open and non-threatening way to learn guitar in private. Ubisoft claims that playing an hour a day, however you want for a 60 day period will teach you how to play guitar. I didn't have 60 days to test the game, but after spending the better part of two weeks with the game, I can safely say that I'm far better and have a greater understanding of how to play guitar than I did two weeks ago. I can play three pentatonic scales away from the game as well the better part of the worst Blitzkrieg Bop cover you've ever heard, but having a little bit of external instruction is a great idea too, which helped me correct techniques that I wasn't quite getting or doing wrong.

Calibrating the guitar is a breeze and is complete in only a few minutes. The game even picked up my friend's acoustic guitar with a quarter inch input. After that, the game will make recommendations for you to improve your skills bit by bit. The game will offer straight up lessons with videos and practice sessions. These videos should be where any aspiring guitarist should start. Here you'll learn topics as simple as holding your pick properly to complicated chord progressions. Specific videos and sessions are a breeze to find through the game's easy to navigate menus. If you're playing on Xbox 360 and have a Kinect, you can use your voice to snap easily from menu to menu as well.

Once I got the initial lessons out of the way, I spent most of my time in the Guitarcade. Here you'll play a huge variety of minigames that team you valuable guitar playing skills like skipping strings, scales, slides, and other lessons that don't necessarily start with 's' like chords. In the traditional method of learning guitar, you'd simply practice scales and chords over and over again until you built the muscle memory. RockSmith takes these repetitive activities and successfully "gameifies" and adds incentives to build up that initial muscle memory.

The game also has a Session mode where you can play whatever you want while a virtual band with instruments and timing of your choosing play alongside your riffs. It's fun to mess around with as a beginner before you learn much and seems like it would become brilliant once you have a firmer grasp of what it takes to play the guitar. The system works great, but there's unfortunately no option to save your riffs online or locally. Hopefully that gets addressed in a patch and will add a great extra value to the game. As it stands now, at least you plug in a second guitar or bass and jam with a friend while the virtual band backs up the both of you.

The real meat of the game is learning songs, and you're bound to find a few favorites of your own along the way. If you're anything like me, you'll cry at the thought of mastering a song you thought sounded simple and somehow contains chords that seem to defy the physics of human fingers. Still, slowly but surely, little by little, you'll chip away at the mountains that some of these songs present. Stick with the game long enough, and you just might be able to play songs ranging in time and style from around 50 artists such as Muse, Radiohead, Bob Dylan, The Rolling Stones, The Police, System of a Down, Smashing Pumpkins, Rise Against, Queen, R.E.M., White Zombie, Green Day, The Who, KISS and Foo Fighters. It's obviously all from the Pop or Rock persuasion, but the game is called RockSmith for a reason.

As you're learning the songs, the game will give you missions to complete as it analyses your playing ability. Mess up chords and the game will recommend Guitarcade games and lessons that strengthen your chord playing. If you're having trouble with a specific passage or riff, the game will recommend that you go jump into the riff repeater mode to slow the notes down and increase or decrease the difficulty until you get it down just right and are ready to move to the next step. It's up to you how, when, or even if you tackle these lessons, which ensures the user is always having fun learning their own way. Again, thanks to some solid user friendly design players can change the speed, difficulty and section of a particular song quickly and efficiently. Players can expect to spend a whole bunch of time in this section.

The game has a few online features like leaderboards for the Guitarcade games and the ability to download new songs via DLC. Being a teaching tool instead of a game, there's no real place for online multiplayer in a game like this, and I never missed that inclusion. You can also import the tracks from the previous RockSmith game if you own that one.

The presentation for the game is as good as it needs to be, considering most of the game is coloured notes coming down across a digital fret board, the frame rate is the key, and it always stays high. The retro styled Guitarcade games generally look cute and vary visual styles very effectively from game to game. From a cheesy house of the dead clone to an 8-bit style beat-em-up, there's a surprising visual variety to the game. Some may also be disappointed in the lack of an included method to read traditional guitar tabs for the included songs, however.

It's important to note, the game pretty much requires that you hook up your console to external analog speakers. Running the sound through TV speakers or through an HDMI cable results in lag levels between your guitar and the sound from the speakers that renders the game unplayable at higher speeds and difficulty. Fortunately, hooking up sound through analog is a breeze with the cables that came included with your console of choice and a standard stereo or surround system that takes analog RCA inputs. Ubisoft was kind enough to include a sheet with the game with optimal vs. less ideal hookups.

In the end, learning guitar is really hard. This game doesn't change the fact that getting good at playing guitar requires a commitment level and several setbacks before you can produce anything remotely inoffensive to the human ear. I showed the game to two talented guitarist friends of mine, and both suggested that it was a great place to start for the guitar neophyte who is already a gamer or tech savvy. You'll get the most out of a guitar learning experience alongside a real human being who can point out with greater accuracy the little mistakes and adjustments you need to make, but I can't think of a better way to practice the fundamentals than with this game. For those who commit to the daily regimen, RockSmith could very well provide the first non-threatening steps to a lifetime of musical enjoyment, or perhaps even a fun new way to practice for a more experienced guitarist.