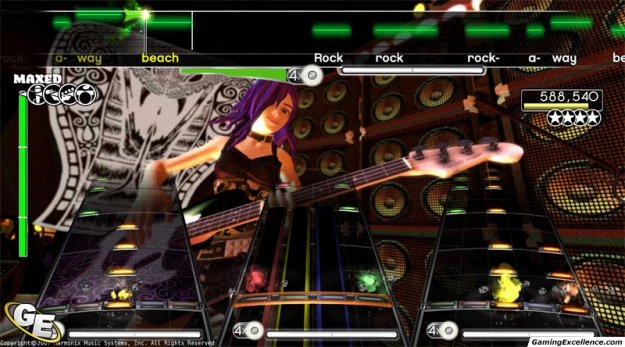 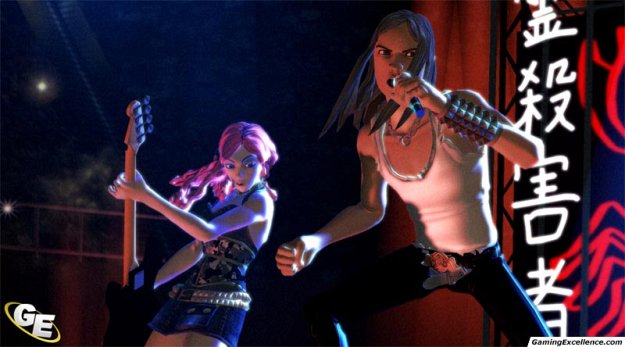 Harmonix as a developer has produced some of the most beloved musical rhythm games of the past few years. Frequency, Karaoke Revolution, Amplitude, and of course, Guitar Hero are all the brain children of these talented and musically inclined designers. Starting this holiday season, they will be combining these franchises in a way you've never seen before in their new game; Rock Band.

If you've played any of the aforementioned games, you may have a better idea of what to expect out of Rock Band. Rock Band essentially gives you and three friends the chance to rock out with your choice of four instruments; Bass, Guitar, Vocals, and Drums. Each instrument is laid out on the screen on three vertical tracks, and one horizontal one that flows across the top. Drums, Bass, and Guitar are the verticals, while the lyrics and vocal cues flow across the top of the screen.

Guitar and Bass play pretty much exactly like Guitar Hero does. Notes come at you on a track, and it's up to you to hold the proper fret keys on the neck down as you strum the note as it passes through a line at the bottom of the constantly flowing track. In Rock Band, the notes are shaped as rectangles as opposed to circles, but aside from that minor cosmetic change, your Guitar Hero skills will carry right over to this game.

Vocals are quite interesting, and play similarly to Karaoke Revolution. The game measures your pitch and key as you sing along to the lyrics. The game doesn't check accuracy of lyrics, so if you want to change the lyrics to "Should I Stay or Should I go?" to "Could I Bake my Indiglo?" you can feel free to do that as long as the pitch of your voice is consistent. Also, it is the vocalist's job to play the tambourine or any sort of handheld percussion by hitting the microphone up against their free hand. That's right, this means that the cowbell in "Don't Fear the Reaper" falls upon the vocalist of the Band. Alas, a cure for that pesky cowbell fever.

I had one hell of time figuring out the drums, but they show a lot of promise. The drum set consists of four percussion surfaces labeled green, red, yellow, and blue, each one representing different drums such as snare or cymbals - and looks very similar to a standard drum kit. The orange note is played by hitting the kick pedal on the bottom. My timing was way off the entire time, and my Guitar Hero skills did me no good in trying to get the timing for the drums down. Other people I observed were playing them with relative ease. The drums fundamentally play on the same concept as the guitar in that you must hit the proper notes as they go through the line at the bottom. Everyone controls their own star power, and doesn't not have to be co-operatively operated.

If a player fails out, the song doesn't automatically end. If the remaining players play well enough, they can revive the fallen band member back into the song. A good way to look at it is by picturing the revival an overdosing rocker with the power of rock. It would make a great climax to a rock movie.

If the rumored two-hundred dollar price tag is accurate, then you can at least rest assured that you are getting decent quality peripherals for the price. The foam drum set is built very solidly, and will likely stand up to the overzealous punishment that comes from being hit repeatedly with actual drumsticks. The microphone is just a standard USB handheld mike, but it picks up and amplifies the voices quite well.

The new guitars are a sight to behold. Guitar Hero's controllers have got nothing on these gorgeous looking Fender Stratocaster guitars that look pretty real if you squint. Obviously there aren't any strings on the guitar, but the colours of each button are located on the top of the neck instead of the front, keeping the neck a uniform colour. If you look at the bottom of the neck, you'll find some smaller fret buttons that are used mostly for solos and extra points. What I was most impressed about though, is how the strum key doesn't click like the old Guitar Hero ones do. This one is as quiet as a pin drop, leaving you to only hear to triumphant sounds of your rock instead of an incessant clicking sound. The Fenders are a good amount larger than the old guitars as well, which may be more comfortable for those with bigger hands. The Whammy bar is also more pronounced and sturdier than before. More good news is that your old Guitar Hero controllers will be fully compatible with Rock Band, including the new wireless ones that come with Guitar Hero III.

The graphics in the game are taken up mostly by the four tracks that your band has to follow, but there is a stage section that shows off your band in all their glory. Whenever you start a new song, all the members are introduced with some dramatic flash cuts and grainy black and white. The animation of the characters was quite impressive, but the frame rate was not quite up to snuff and seemed to be hovering around the twenty per second mark. Hopefully this admittedly minor issue will be resolved in time for the game's release. The loading screens are amusing and have some cool trivia about your favorite musicians.

Acoustically, Rock Band is undeniably phenomenal. Rock Band features a strong track list that features many big names such as Jet, The Clash, Metallica, Smashing Pumpkins, Nirvana, Foo Fighters, and many more. The officially announced track list as of this writing is as follows:

A few things about the track list stand out, most notably that there a few songs on this list that are appearing in Guitar Hero III, such as "Cherub Rock" and "Mississippi Queen". Also, I suppose it wouldn't be a Harmonix game if there wasn't a track by Freezepop on there. All in all, Rock Band features what I think is a strong set list, with many more songs yet to be announced.

Rock Band is shaping up very nicely, and combines ultimate playability, accessibility, awesome multiplayer game play, and just flat out fun in such a polished and impressive package. Get to ready rock in time for Christmas 2007.