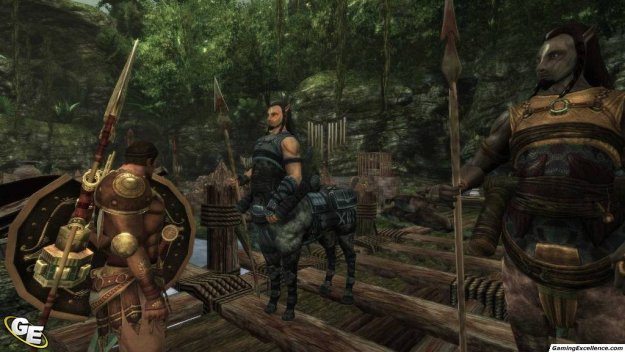 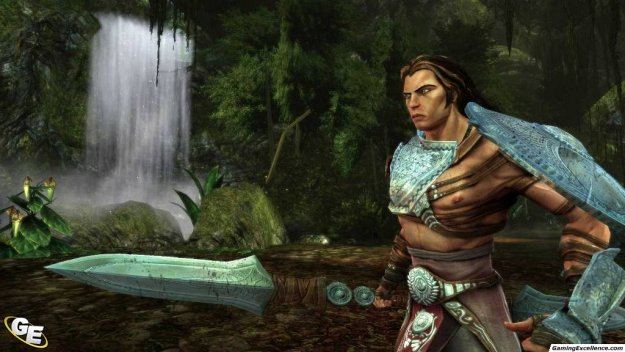 You have your Mass Effect and God of War floating around. To most, they are herald as masterpieces of their genres. It seems the people at Liquid Entertainment decided to take the good aspects of these games and create their own. What we got was Rise of the Argonauts.

If you're familiar with the tale of Jason and the Argonauts, forget it. While the tale's main point of Jason's quest for the Golden Fleece is in tact, the rest is a new brand of fiction. Jason is getting ready to marry his childhood sweetheart, Alceme, when a group of warriors called Blacktongues assassinate her on the eve of their wedding day. Refusing to deliver her last rites that will send her spirit to the next life, Jason decides to look for the Golden Fleece to bring her back. In his travels, he is joined by a group of some of the most famous Greek heroes such as the Hercules, the son of Zeus and the mighty warrior Achilles.

The first thing that grabs you about this game is the story. While it isn't an exact retelling of the original quest for the Golden Fleece, it does carry the spirit of it. The story is quite engaging and it has a great deal of interesting moments. This is thanks to the conversation tree ala Mass Effect. During certain events, Jason is given options on what to say. Also like Mass Effect, the options aren't exact phrases Jason will use, but more of a rough feeling that he has. However, these really don't seem to affect much of the story for Jason. Most of the conversations options are tuned with four Greek Gods and the conversation choices affect what experience Jason will get with each of them. The game also takes a new-spin on the quick-time event system by making conversations these events. During certain conversations, Jason will have only a few seconds to pick a response he wants to deliver and if you miss it, he will just go with what the developers programmed him to say as default.

Paying homage to these Gods are important to the Greek heroes and when giving tribute to them, they can be rewarded with aspects in battle. The fours Gods of this game are Ares, Hermes, Apollo and Athena. Each of these is attuned to a different weapon that Jason carries: His sword (Hermes), spear (Athena), mace (Ares) and shield (Apollo). While the conversation tree is one way to gain points for your aspects, the other is an achievement system. Rather than use a standard leveling-up system, the game grants Jason achievements for what he does such as defeating a certain number of enemies with a weapon or using the Ares conversation option a certain number of times. When these achievements are earned, you can go to the Aspect option of the pause menu and devote these achievements to any of the four Gods. Use enough and you will gain an aspect point which can be used to buy abilities. For example, using aspect points in the Hermes tree will give his sword extra powers and will recharge his God meter (That's the thing that Jason uses to activate magic powers) more quickly. This new system works very well, but after awhile, it seems almost useless. You won't find some of the things that you are use to in these options such as increasing health or making his weapon hits stronger. These mainly focus on more magical abilities and there are a few aspects that will make Jason a bit tougher, but near the end of the game, you begin to ask yourself: "Why even bother?"

While it is billed as an action RPG, the game feels more like a hack and slash action adventure. All the combat is in real time and it is pretty good. Jason can easily switch between weapons and can even chain weapon combos with other weapons. So one minute he is swing his sword and the next, he has taking out his spear and impaled and enemy with it. Most players will have a favorite weapon they mainly use, but it pays to be versatile with them. The weapons have a rock-paper-scissors aspect of them, so while one weapon will work well against one, it won't fair so well against the other. There really isn't any finesse while in combat. It boils down to just button mashing the standard attack button while finishing up with an execution attack that will hopefully dispatch your foe. The controls are easy enough to use, so there is little learning curve to it and the most novice of gamer will pick it up fairly quickly.

The graphics could have been better in this game. Jason is on this epic quest for the one he loves, and yet he and the people around him barely express their emotions. The characters seem to always have content expression on their face and it rarely changes. The characters seem almost bored to be talking to you and it takes you out of the story at times. A lot more could have been done with the Unreal Engine, but Liquid Entertainment didn't really push it like the other developers before them that used the engine. The architect for the scenery is fairly put together. It isn't like the same skin is put over the same thing over and over with just a different color scheme; care was taken to make each of the different places unique and beautiful in its own right.

Sound is a stone that the developers tripped over while making this game, there are numerous times where things happening in the background will over-shadow dialogue by characters and it forces you to have the subtitles turned on to make sure you don't miss anything important. It takes away from the cinematic aspect that they were trying to bring in and it just seems awful that this couldn't have been handled better.

Another thing that could have been handled better was the HUD system for the game. The game doesn't start with it on, but in the end it is necessary to have. There are no visual cues to see when Jason in hurt except when he is one hit away from death, so unless you have it on, you won't know how to change your combat strategy if you are getting seriously beat on by enemies. It makes you wonder why this system wasn't just kept on right at the beginning of the game. It wasn't until I completed the first part of the game that I realized that I actually had to option to see my health. Also the lack of a mini-map makes it quite easy to get lost and a pain during gameplay. There were several times I had to pause the game and check the map just to make sure I was heading in the right direction. It makes the gameplay jerky and it would have been so easy to have a mini-map at the top-right of the screen, but for some reason it wasn't added.

Rise of the Argonauts had the potential of being a great game. Taking aspects from some of the beloved games of the past was a good idea, but at times it seems to be fighting each other for control on what game it is trying to be. The final package is still good, but if you were planning on it being the next big thing, you may be disappointed.