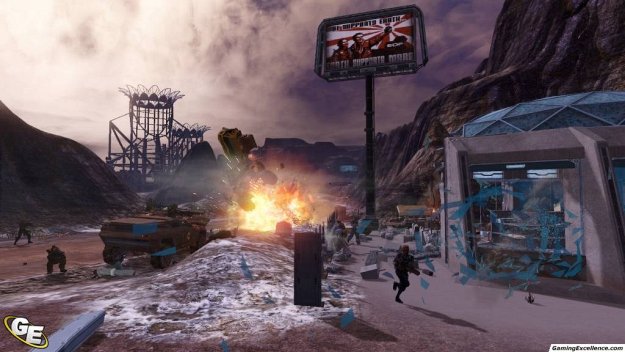 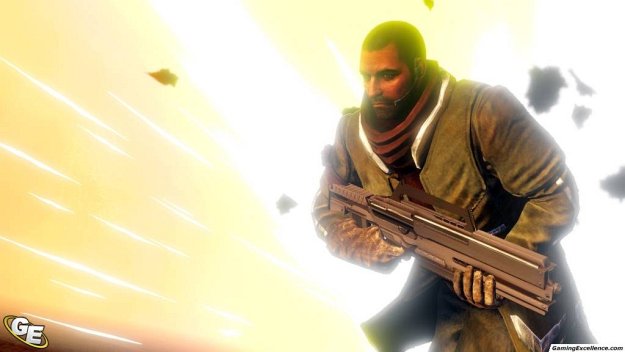 Welcome to Mars, an inhospitable landscape perfect for wreaking some destruction. We recently had an opportunity to try out a near-final build of Red Faction: Guerilla, and in our first of two previews we'll be focusing on the vast multiplayer component of the game.

It's been seven years since Red Faction II hit the shelves, and with the upcoming third release, the series is shifting to a third-person perspective and an emphasis on pure carnage. In fact, the big selling point of Red Faction: Guerilla is the plethora of means you have of destroying the game world. Nearly everything you see can be demolished - from buildings and bridges, to vehicles, just to name a few. If it's in the environment, chances are you can wreck it - and we're not talking about a little bit of damage, we're talking total annihilation. Better yet, RF:G takes great advantage of its engine in the multiplayer modes, leading to some unique gameplay innovations that push it beyond your typical third-person shooter.

Before we get too deep into the modes, you're going to want to know what hardware you're taking into battle. Red Faction: Guerilla offers a wealth of guns, explosives, and other, more "improvised" weaponry. You'll start with the trusty sledgehammer: this thing packs a punch and makes a great melee weapon. You'll also find the standard pistol, assault rifle, and shotgun, but it's the explosives that really do justice to the developers' vision. The remote mining charge (or sticky grenade) is a high explosive, and the rocket launcher can do serious bodily and structural damage. In the Wrecking Crew mode, which we'll discuss in greater detail later, you'll be able to use singularity bombs (one of the largest explosives in the game - and thus, most fun), taking out massive structures. Some of the more unlikely weapons include a grinder that, while inaccurate, shoots saw blades for great effectiveness at close range, or if you prefer, an arc welder that blasts bolts of electricity at your foes, leaving them a heap of positively-charged matter.

Combined with the weapons, you'll find backpacks throughout the multiplayer levels. These act as boosters and provide a range of additional abilities. The jet pack allows you to take to the skies in short bursts and become a very difficult target, while the tremor pack shakes everything nearby and brings buildings to their knees. The fleet-footed pack allows you to move at high speed, and when paired with a sledgehammer, is a lethal combination. Lastly, and my personal favourite, is the Rhino pack. This pack allows you to blow through solid brick and unsuspecting enemies alike, and ultimately provides a ton of satisfaction.

Getting to the actual gameplay, Red Faction: Guerilla features a variety of online multiplayer modes, including the typical Anarchy (deathmatch) and Team Anarchy, as well as Capture the Flag, Damage Control, and Siege and Demolition. Having stepped into a few Team Anarchy matches, I can say the games are very fast-paced, in part due to the generous littering of weapons and backpacks in the online maps. Damage Control is one of the more innovative multiplayer modes, and it really flexes the destruction engine. It works similarly to the Battlefield series, where your team captures and controls various points on the map. However, this incarnation requires that you destroy a structure, then use a regeneration tool to rebuild it, thus taking control that waypoint. It's definitely a neat idea and a lot of fun, adding some spice to the more typical run-and-gun styles of play.

I've saved the best for last - a hidden gem with which I've had the opportunity to spend a smashing couple of hours. As promised, I'm talking about Wrecking Crew, a mode designed to be a party game amongst a group of friends. When I spoke with a producer at Volition on the topic of RF:G, he mentioned that Wrecking Crew wasn't even in the original game plan - the team sort of stumbled upon it. How glad I am that they did. Essentially, each player is given a limited amount of time to cause as much damage to a set of structures as they can. You can play with unlimited ammo and wreak unbridled havoc on your stone victims, or you can limit the ammo to ramp up the challenge; in the latter case, you must try to co-ordinate the falling of each skyscraper so that it hits another, causing maximum damage. We tried out a few different scenarios: playing with just a sledgehammer and the Rhino backpack proved to be a big hit, as buildings would often collapse right on top of you after taking out the last of their supports. Singularity bombs also proved to be a riot, causing the ultimate amount of chaos and leveling the entire world. This pushed the physics engine to its limits, and was sure as hell fun to watch.

So far we've only covered the multiplayer modes of Red Faction: Guerilla, and they certainly look very promising. We'll have our full single-player impressions in the coming days, but in the meantime, I strongly recommend our readers take a look at the media gallery to get an idea of the power of the destruction engine, and to see why the upcoming entry in the Red Faction series is one of a handful of games I'm really looking forward to later this year. Strategic demolition with high explosives and realistic carnage? Yes, please.