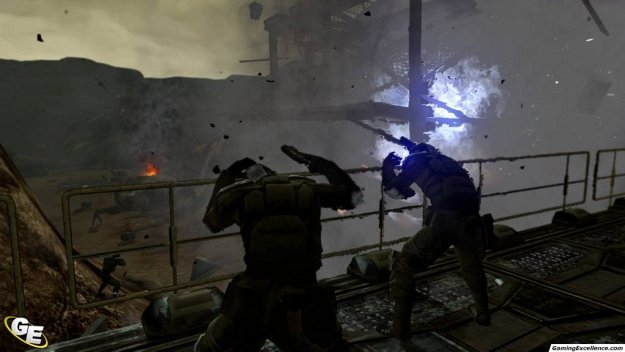 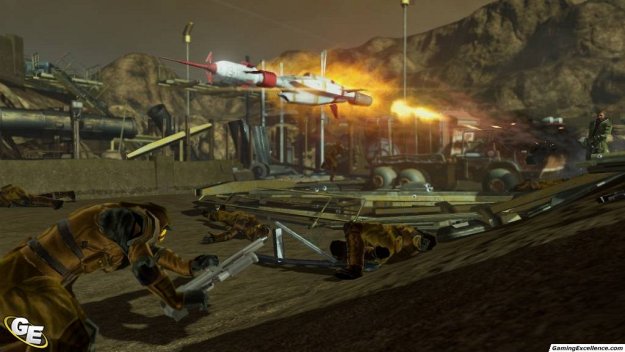 The world of Mars is a hostile territory. An insurgent group is rebelling against a controlling and powerful foe and you're caught right in the middle. It's a story we've heard time and time again, but it isn't the story in Red Faction: Guerrilla that will have you coming back time and time again. It's the fact that the game offers one of the most advanced and jaw dropping destruction engines ever created, and a very solid campaign to make it shine.

Developed by Volition and published by THQ, Red Faction: Guerrilla is the third title in the Red Faction series; the first in nearly seven years. With an emphasis on pure carnage, the big selling point of RF:G is the plethora of means you have of destroying the game world. A third-person shooter, you play as Alec Mason, an explosives expert dragged into the conflict by the assassination of your brother at the hands of the Earth Defense Force. At the conclusion of the first two games, you've managed to crush the evil ULTOR Corporation, but your former ally in the Earth Defence Force has become a bitter foe over the past fifty years. They have occupied Mars with a controlling hand, using brutal tactics to achieve their goals, no matter the cost to civilian lives. Red Faction is about to change that.

In your corner is a talent for high explosives and you'll get plenty of use out of it in this game. Imagine this - a massive bridge across a gorge, you run across it placing strategic charges on the support pillars and deck, and blow it to pieces as an enemy convoy approaches. Or a massive tower brought down into a pile of rubble after being imploded by explosive charges. Buildings crumble and debris flies into the air in a cloud of smoke. Rocks and concrete chunks hurl across the terrain and car bombs tear through a fortified base, demonstrating just a handful of the guerrilla tactics. Using the powerful Geo-Mod 2 engine, the game takes advantage of its highly destructive world as most missions in the game focus on demolition in some form or another. It's one of the key elements that really make the game both unique and so much fun.

Red Faction: Guerrilla is an open-world game, divided into six sectors: Parker, Dust, Badlands, Oasis, the Free Fire Zone, and EOS. Each sector has a distinctly different feel, the color palette changes drastically, and you'll find a different variety of vehicles and structures based on the inhabitants. Parker and Dust are primarily mining communities, wherein Oasis and EOS are more swanky upscale living communities. They all have one thing in common - they're occupied territories of the EDF.

As you progress through the campaign, you'll be required to liberate each sector, by destroying EDF installments and completing missions. As you cruise around the terraformed Mars landscape, high importance targets are flagged on your minimap. Destroying these targets is essential in liberating the sector from EDF control, each target carries a set number of control points and when destroyed the EDF's control in that sector drops. Once you've brought their control over the sector to zero, you'll be able to play the final mission and liberate the sector.

In your travels, you'll come across large variety of Guerrilla Actions, which are essentially side missions to complete in each sector, earning you salvage, control points, and boosting civilian morale. From training missions which teach you valuable destructive techniques, to raids on EDF property, messenger interception, and rescuing hostages held captive by EDF soldiers, you'll find a good variety of side missions that offer both a challenge and lasting experience. Not to mention the enjoyment you'll get out of riding shotgun with Jenkins, a crazy ole son' bitch with a massive turret mounted on the back of his vehicle and a hate-on for everything EDF.

Assisting you in the fight, each sector also has civilian morale. As innocent civilians are killed, morale drops. On the other hand, by completing Guerrilla Actions and destroying EDF propaganda, you'll raise the morale. The higher the civilian morale, the more likely they are to stand alongside you in a fight. With so many EDF soldiers to take on, any ally is a good ally.

As you destroy EDF structures, you'll collect salvage, the currency in the game. This salvage can then be used for upgrades and new weapons in your rebel safehouse. As you progress through the campaign and meet certain objectives, or play through the various guerrilla missions, you'll unlock a wide variety of weaponry to make your job much easier. In a game with an emphasis on destruction, you'll find a explosive-packed arsenal including remote charges (that stick to everything, including unsuspecting enemies), proximity mines, singularity bombs, rocket launchers, and later the thermobaric rocket launcher which packs a serious amount of firepower. You've also got the standard fare of guns: a pistol, and assault rifle, and a Nano rifle, which can disintegrate matter (both human and structural) from a distance. You'll also find a variety of more improvised weapons like an arc welder and grinder. Yet, if you want to get down and dirty, you've always got your servo-powered sledgehammer to annihilate an unsuspecting foe, or take out critical support columns in a building. A versatile weapon that you'll always have by your side, and let's just say it packs a punch.

Place a few mines on a vehicle, and you've got an instant car bomb. While it's a hell of an explosion, it's only a fraction of what you can do if you get your hands on a tank or walker. The walkers are found in a few hidden areas of the map, and are effectively massive mech warriors, capable of smashing and crushing structures with ease, and tossing enemy vehicles through the air. They're one of the ultimate weapons in the game, and when combined with the outstanding destructive power are highly entertaining to watch.

Visually, the game is well crafted. When explosions rock the world, you'll see debris fly through the air and plumes of smoke as the destructive force tears through the structures. Character models, both allied and enemy, could use some improvement, but they're more than adequate for the target audience, and if it's a tradeoff between a great looking character model and being able to push the physics that much farther, I'd take the destruction any day. Amazingly, the game runs at a very respectable framerate, even when buildings are crumbling all around and you've got a dozen mines going off at the same time.

Similarly, the voice acting and soundtrack are very solid. The voice acting is believable, and dialogue feels fairly natural. The sound effects are very realistic, as bombs explode and pure carnage ensures you'll hear the twisted metal scrape and torque until it comes crashing to the ground. You'll hear the concrete fragments pellet all around you after detonating a charge, or the scream from an unsuspecting EDF soldier when you blow them to pieces. It's not over the top, but the audio suits the game very well.

Red Faction: Guerrilla is a massive game. Alongside the single player, you'll find a wealth of online multiplayer modes, well beyond the standard fare for a typical shooter. As with the single player, the multiplayer modes also focus heavily on the destruction engine, and offer support over the PlayStation Network and Xbox Live for up to sixteen players. You'll find the typical anarchy and team anarchy modes, as well as capture the flag, but the real gem of multiplayer comes with the siege, demolition, and damage control modes.

In siege, one team is responsible for destroying the marked structures, while the other needs to defend them. The defending team can take advantage of the maps by blowing up critical bridges, costing their opponents valuable time to regenerate them. After the match completes, either by timeout or the structures being leveled, the roles reverse and the attacking team goes on the defensive. Demolition is similar, except both teams are tasked with causing as much damage as possible. One player on each side is marked as the destroyer, and the goal is to protect your destroyer while they do the damage. Once killed, the role is offered to another player on the team. Damage control is a standard king of the hill style match, but in this version the only way to capture a waypoint is to destroy it, and then regenerate it using the regeneration tool.

You'll also make heavy use of backpacks throughout the multiplayer levels. These act as boosters and provide a range of additional abilities. The jet pack allows you to take to the skies in short bursts and become a very difficult target, while the tremor pack shakes everything nearby and brings buildings to their knees. The fleet-footed pack allows you to move at high speed and, when paired with a sledgehammer, is a lethal combination. Lastly, and my personal favourite, is the Rhino pack. This pack allows you to blow through solid brick and unsuspecting enemies alike, and ultimately provides a ton of satisfaction.

The final mode is a gem of a party game, called Wrecking Crew. Offering a handful of different scenarios, in Wrecking Crew each player takes a turn trying to cause as much destruction as possible. Total Chaos is pretty straightforward, unlimited ammo and one minute to get the damage done. In Escalation, you've only got a finite amount of ammo, so every charge means that much more and you'll rely much more on well placed charges, ideally trying to get one structure to fall on another. Rampage is a combination of the two; you've got three minutes, but every time you use a weapon it'll cost you ten seconds, making strategy play a much deeper role. There's a wide range of variations in play, select a weapon and backpack, or let the game select it for you. We tried out a few different scenarios: playing with just a sledgehammer and the Rhino backpack proved to be a big hit, as buildings would often collapse right on top of you after taking out the last of their supports. Singularity bombs also proved to be a riot, causing the ultimate amount of chaos and leveling the entire world. This pushed the physics engine to its limits, and was sure as hell fun to watch.

In all, one of Red Faction: Guerrilla's biggest strengths is that it's simply a lot of fun to play. Smart design decisions such as the minimal impact of death (which will happen) are of great benefit in achieving this goal. As well, some of the larger structures will have you reloading and destroying it again and again, just to see how many ways you can bring a bridge or building to its knees. A very solid single player offering, expansive multiplayer modes, and an offline party game that's accessible to anyone, Red Faction: Guerrilla is an early candidate for one of the top games of the year. The destruction engine is a marvelous technical achievement, and really sets it apart from other games in the genre, and the diverse multiplayer offer up significant replay value. For anyone with an appetite for destruction, Red Faction: Guerrilla comes highly recommended.