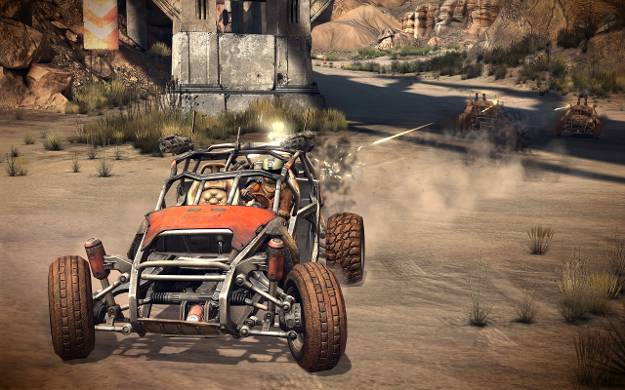 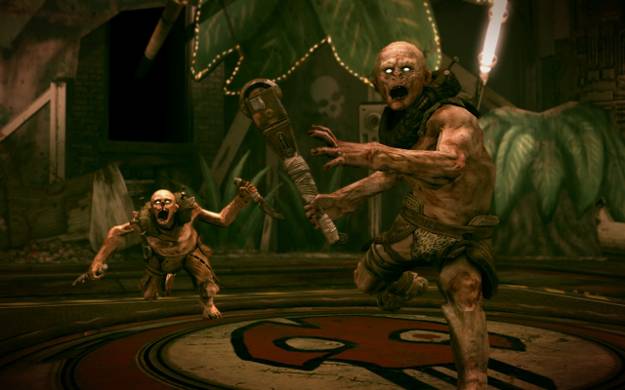 The creators of Doom and Quake, id software, are back with their first developed game in more than half a decade. After creating a PC benchmarking tool with Doom 3 in 2004, id returns to the stage with their first ever open world title, RAGE. Does their new combination of first person shooting, role playing elements, exploration, and racing make a fitting continuation of id's legacy as a premier developer, or will simply cause gamers to enter their own white-hot rage?

Being a post-apocalyptic thriller in the vein of Mad Max, players are made privy to an asteroid that is hurtling towards earth, and nothing can stop it. You, however, are one of the lucky few who qualified for the ark program, an initiative that protects the best and brightest in underground bunkers to ensure the survival of the human race. You awaken to find something has gone very wrong. It is a hundred years later, your ark-mates are all dead, and you emerge into a wasteland filled with mutants, bandits, and also friendlies, all being controlled by the watchful eye of a mysterious group known only as The Authority, and they're looking for you.

At its most basic, RAGE is a first person shooter, a genre that has been id's bread and butter for the last 20 years now. But unlike their pure blast-a-thons like Wolfenstein, Doom, and Quake, RAGE is an open world game that allows you explore as much as you pump enemies full of lead. Filled with colourful characters and varied locations, you'll gladly immerse yourself in this world as you blast your way through the ten hour campaign.

During the shooting sections you'll encounter many different kinds of enemies, all with their own unique, but excellent AI. Bandits will take cover and attempt to flank you, while the mutants will overwhelm you with their sheer numbers as they climb walls, ceilings, and door frames, and the Authority will use their superior tactics, jetpacks and weaponry to flush you out of your hiding spaces. Bosses are also enormous and creative.

Beyond the standard assault rifles, shotguns, sniper rifles, and stealthy crossbow, RAGE increases its depth with a flexible RPG-like system that allows you customize your play experience in subtle ways. Guns can take different kinds of bullets for different effects and damage, and items scavenged throughout the wasteland can be used to create new and useful items, or simply sold for cash, which can be used to upgrade your character, your weapons, or your vehicle. Oh, and the boomerang-like wingsticks that you can make yourself or purchase from vendors are a bloody hoot to use.

Within the bullet-soaked mayhem of RAGE, there is a complete racing game as well. Combining the desert setting, break-neck speed and handling of games like MotorStorm with the weapons and combat of Twisted Metal, you're actually getting a rather unique racing experience at no extra charge. Most of the racing is optional, but the rewards are great and it's a fun enough diversion that you'll want to race just a few more laps. In a nice touch, currency earned in races can be used to upgrade your vehicle for use in between towns and levels in the wasteland, giving you more of a chance to defend with offense in the no-holds barred roads of the wasteland.

Also, being an open world game, there are plenty of side-missions and goofy distractions like gambling and an addictive collectible card game to keep you busy as well. Id's big success here is that none of it feels extraneous or like mindless filler. It simply makes the world feel more organic and immersive. Helping with the immersion are the very well realised characters, each with excellent voice acting and mind blowing animation. Nearly all the quests, even the side-missions, feel like an important part of the game's story and narrative, and mindless fetch quests are generally held to a minimum.

All of these options are available within a large open world that features a lot of varied environments but is not as huge as games like Borderlands and Fallout. This is a double edged sword. On one hand, it keeps the story going with excellent pacing and progression, but does not encourage the same level of exploration as the aforementioned titles. Also annoying is the fact that there's no map system with customizable waypoints. You'd better hope that where you want to go has an active mission, because you can't look on the map and place a waypoint for yourself just anywhere. It's an unfortunate oversight to say the least.

Some gamers might be disappointed to learn that RAGE doesn't include any sort of FPS multiplayer, but I don't think it's any big loss. These days, if you're not Call of Duty or Halo, you'll likely see your servers deserted within weeks of release. Instead, id decided to include nine very fun online/split-screen co-op missions to flesh out the main game's story and also a full fledged combat racer that's a cross between Twisted Metal and Mario Kart. I felt it was better to try something new and different with the multiplayer than to try and simply muscle in on a multiplayer genre that is already over saturated.

Id is a company that develops graphical engines nearly as often as they develop their own titles, and RAGE is no exception. Rolling out with this title is the sparkly new idTech 5 engine, and it's nothing short of a technical marvel. Through idTech 5, RAGE's world is one with no draw distance whatsoever, a super-smooth frame rate that never hitches, outstanding facial animation on a nearly L.A. Noire level, and brilliantly crisp overall visuals. It's not quite perfect, though, as there is very minor texture pop-in to be seen, a few visual glitches involving twitching corpses, text and subtitles that are too small to read for some players, and a few blurry textures to be seen when you're right up to a wall. Despite these minor complaints, it's not hyperbole to suggest that RAGE is the best looking shooter of this generation, possibly even better looking than Gears of War 3 and Crysis 2.

All this visual fidelity comes at a price however. All three versions have rather long load times, especially when reloading a save file or restarting after a death. The PS3 version requires a 30 minute, 8 gig install, while the Xbox 360 version ships on three discs and features the longest load times of the three versions, unless you install each disc individually. PC gamers will need a very beefy system to take advantage of the graphics, as well as an unprecedented 25 Gigs for the install. Considering the console versions max out at 720p resolution, if you have the PC hardware to take advantage, you'll find the best visual experience in front of a mouse and keyboard. No matter which version you play, you're in for an excellent visual experience.

Minor quibbles aside, we here at GamingExcellence have never been so happy to be so enraged. It's a great day for gaming when we can welcome id Software back into our living rooms and computer desks. RAGE is an easy candidate for the best game of the year, and was well worth the wait. Don't miss it.