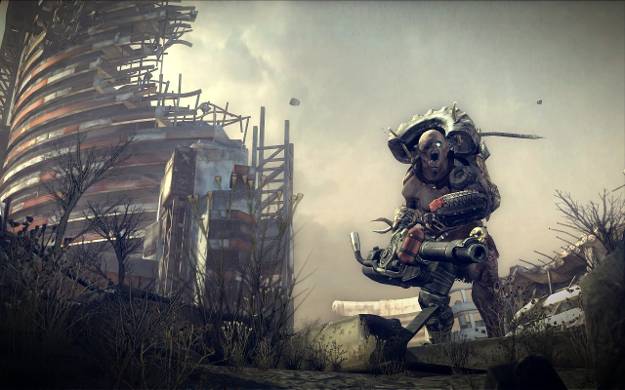 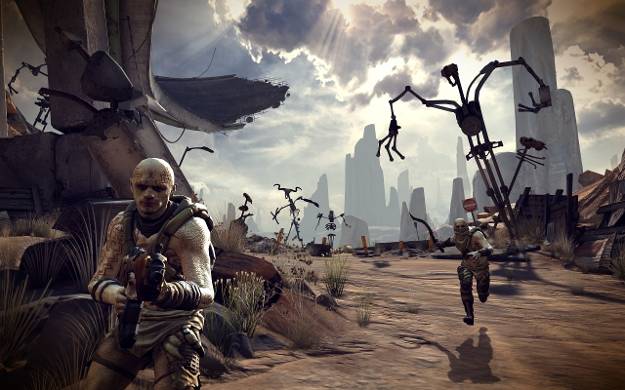 Rage was, well, the rage, at last year's E3. This year, it was one of the few fully playable demos in the Bethesda booth. It's the first year in a while that there hasn't been something Fallout-related present, but the similarities to Rage's sister shooter are impossible to ignore.

The basic concept is this: the player wakes up from cryostasis in an underground vault... I mean ark... to discover an unrecognizable, dangerous, post-apocalyptic world. A fascistic organization known as the Authority is throwing its weight around, and there are mutants wreaking havoc while wearing tires for necklaces, accessorizing with giant railway spikes.

The familiarity, however, is not all bad. The first game to feature the id tech 5 engine has controls that are as intuitive as they come. Within minutes I was utilizing all the weapon features in the game: four different guns, grenades, and projectiles called "wingsticks" which are basically boomerangs that don't come back.

There are some pretty nifty character designs: level bosses with tentacle arms, whacked out survivalist TV network directors; but the coolest part of the look of Rage is the horizon line... because there actually is a horizon line. Graphics innovations mean that objects don't suddenly pop into view in the distance as the game renders. They're there from the moment you round a corner or crest a rise, even in the high-speed driving levels. This is the only element of the game I can honestly call innovative.

But there's no denying it was fun to play. In a period of intense technological turnover thanks to the Kinect, the Vita, and the promise of the Wii-U, gamers may be starved for the familiar, and rage will certainly deliver that. "Barriers to entry", a catch-phrase at this year's E3, mean something different for a hardcore gamer, and it's not a bad thing that Rage is a title free of 3D, motion control, voice recognition, or some other gimmick.

However, in an RPG-heavy year at E3, I once again stumbled onto the difficulty of properly judging a title when its primary selling point is story... but there's no story presented. So information on Rage is fairly thin at this time. If the pick-up-and-play element is important to you, however, this is one you may want to keep an eye on.