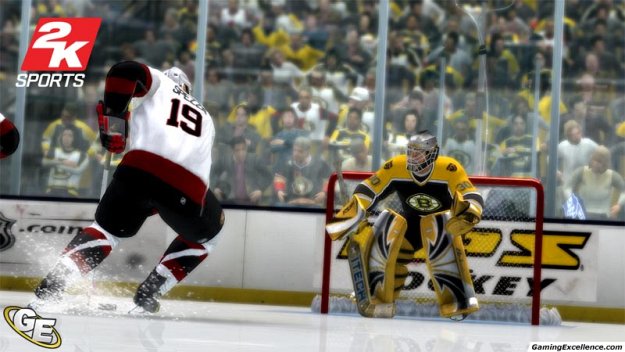 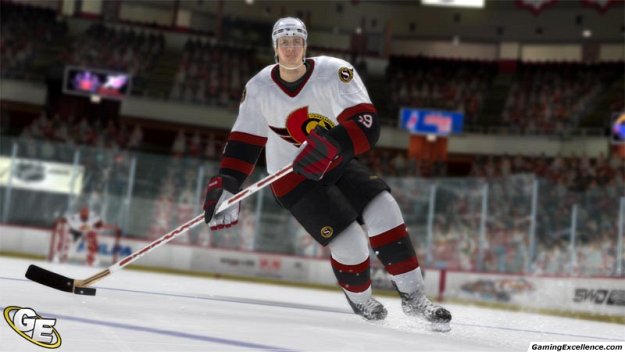 Like many Canadian gamers, I breathlessly anticipate each new installment of video game hockey. Ever since NHLPA 93 on the Super NES, I've been an avid hockey gamer each and every season, guiding my beloved Ottawa Senators to the ultimate prize that they just can't seem to win in the real world.

The same cannot be said for the NHL 2K series. After being the top hockey dog in the video game market from 2K3 to 2K6, the 2K series fell behind EA's offering last year thanks to EA's addition of the skill stick. Unfortunately for 2K Sports, this year continues the trend.

The biggest problem with NHL 2K8 is its new control scheme. Simply put, it's a complete mess. Can some one explain to me why you need to hold down the left trigger and push the shoot button (stupidly mapped to the right bumper) to do a slapshot? Whatever happened to simply holding down the shoot button relative to how much power you want? The craziness doesn't end there. 2K has released the ProStick this year, which seems like a knee-jerk reaction to EA's skill stick. However, the ProStick doesn't work quite right. Push the stick to the left, you'll deke left, push it to the right, you'll deke right. Since shooting is mapped to such an odd button, you'll need some fancy figure work to pull off that perfect deke, which I was completely unable to do with any consistency. It seemed more effective to simply skate left and right instead of using the ProStick.

If you don't want to use ProStick, you can use Superstar moves instead. This is an even more hair-brained idea than the ProStick. Basically, to do a superstar deke, you have to hold down the left trigger and then punch in a combination of face buttons to pull off a canned deke. Many famous moves are included, like Peter Forsberg's spin-o-rama at the 1994 Olympics, Front to Backhands, and Behind the Back shots. None of these canned dekes seem to work when you want them to, and who really wants to pull fighting game style combos in a hockey game? Not me.

Also, for some strange reason, there are two speed burst buttons. One is the standard sustained boost, and another is a sprint button which might as well be called the "instant breakaway button." The instant breakaway button essentially gives your player crazy steroid power, and makes them faster than Speedy Gonzalez on a caffeine rush. Even the slowest grinder can skate around any defence with this button.

At least the crease controls are very nicely done. With a click of the right analog stick, you'll bring up a cone of vision for the goaltender, and the AI will take over your players. The cone glows green when the goalie has a clear view of the puck, and red when he can't see it, affecting your ability to make the save. Once the player takes a shot, the game slows down, and the player must line up a cursor with a target to make the save. Of course, if the goalie is out of position, it gets much harder to line the two up, and usually a goal or a spectacular save will result. If you click the right analog stick on offence, you'll bring up icon passing, which makes setting up plays really easy..

Aside from the crease controls, the new scheme is a baffling disaster, and if you dead set on using the new controls, at least there are plenty of tutorials to guide you through them. However, It won't take you long to switch to the old school controls from 2K games past. But once you do that, you'll have to ask yourself why you don't just play NHL 2K7 with updated rosters and save yourself the cost of 2K8? The only reason I can think of is if you really want to play with the new RBK jerseys, which I personally think are uglier on average than most of last year's offerings.

It's not all doom and gloom for the NHL 2K series though. Once you get used to the controls, NHL 2K's brand of hockey will appeal to some. After spending several years as the premier hockey simulation, 2K8 veers way over to the arcade side of the spectrum. NHL 2K8 is a check heavy, crash-the-net, speedy take on the sport. The checking in the game is very excessive, and the game seems to play more like Midway's arcade classic NHL 2-on-2 challenge than an accurate representation. Like many hockey games, one-timers are still the most effective method of scoring goals too. It's weird, the over-complicated controls scream hardcore simulation, but the gameplay is pure arcade action.

NHL 2K8 really shines once it gets off the ice and into the press box. Bar none, 2K8 is by far the best general manager simulation on the market today. All of the new CBA rules are in place, and you'll have to carefully manage your team and the salary cap to stay competitive. You'll have to negotiate salaries with your free agents, maintain your minor league team, scout out new rookies, organize practices, set ticket prices, and do pretty much everything else that general managers and team presidents have to do. All this is accomplished with an elegant menu system that is convenient and easy to use.

It's obvious that the folks at Visual Concepts love their hockey, and the many unlockables in the game reflect that. You can go into the skybox and play with an air hockey table, an NHL trivia game, or unlock many classic teams like the 1972 USSR summit team or the 1993 Montreal Canadiens. Also unlockable are lots of game modifiers and special rinks like a pirate ship or an outdoor pond. Furthermore, you can play loads of mini-games with support for up to four players on Xbox Live. You can play pond hockey, and a slew of Mario party themed mini-games that play a lot like goofy scrimmages. These are much more fun than playing the actual game, and are good for a few minutes of slapdash fun with a few friends.

NHL 2K8's presentation is a real mixed bag. In terms of graphics, first the good. The audience members in the arenas are all individually animated, and look fantastic. Player models are superbly done, and animate spectacularly, especially the goalies. You'll see sweat drip off the players faces. The jerseys are well rendered, and feature lots of details like creases and ventilation holes. The ice and reflections in the boards are also outstanding. The ice surface will also get chopped up and beat up as the game goes on.

On the ugly side, the player faces all look very off. It's hard to put my finger on, but I think it has something to do with awkward placements on the eyes. Also, the player proportions to the rink seem weird, like the rink is too small or the players are too big. All the camera angles also feel rather awkward, and none give a completely ideal view of the ice.

Audio is the same mixed bag. Personally, I can't stand listening to Bob Cole and Harry Neale call a game in real life, and I don't want them calling my video game hockey either. The play by play is repetitious and annoying. A better option is the Cinemotion option, which eschews the play by play in favour of an instrumental track that changes on the fly depending on the level of drama in the game. It gives the game a bit of a "Miracle" vibe. Sure, it's a bit of a gimmick, but it's a fun gimmick that works well in the context of the hockey game. The on ice sounds are great though. Skates carving through ice, slapshots, and bodychecks into the boards all sound exactly like they should.

NHL 2K8 should be sent back to the minors for some retooling. If your aspirations are more Scotty Bowman than Wayne Gretzky, check this one out for its manager functions alone. While there are many positives to the game like the crease control, great general manager functions, and decent presentation, it's too hard to ignore NHL 2K8's on-ice inferiority to the competition. Gameplay is king, and 2K8 plays fourth-line checker to the competition's first line superstar.