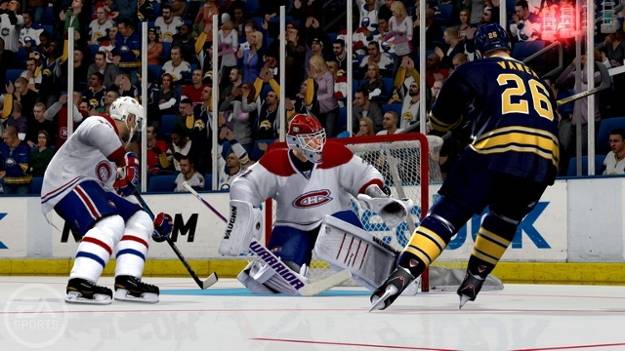 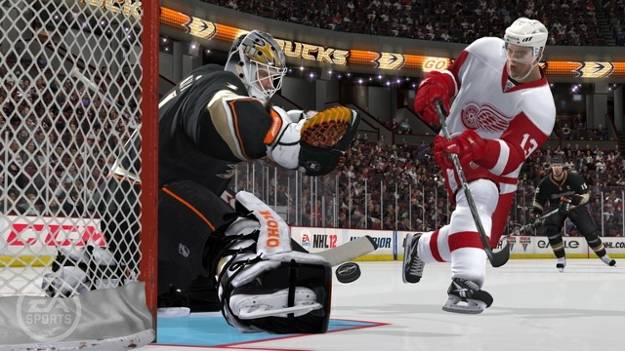 EA Sports showcased its latest iteration of its long-time standing hockey game at X'11 and with 2k Sports taking a year off with their NHL 2k series, gamers will have to settle with the most successful hockey video game franchise to get their fix.

Building off of both NHL '11 as well as the Wii exclusive NHL Slapshot, NHL 12 offers some exciting new and requested features that are sure to please enthusiasts while attracting newer gamers who are looking to play some digital hockey for the first time. Borrowed from NHL Slapshot, NHL 12 has an enhanced Be a Pro Mode which allows your created player to develop through up to four years of junior hockey before being drafted into the NHL. It adds a welcome layer of depth to building your pro into a budding superstar, a defensive specialist, hot-shot goalie, or even the next, great pugilist. Changes within playing Be a Pro Mode includes a handy option to simulate between your player's shifts so you can focus on making a difference on the ice over watching helplessly from the bench. EA Sports has also added coaching tasks which could range from helping kill off a major penalty, to scoring a go ahead goal. There is also an expanded list of game, season, and career goals for your player to obtain as they progress through their NHL Career.

EA Sports has also tweaked its Be a GM Mode to include a more realistic simulation engine where teams will react expectantly to impactful changes. Teams ravaged by injuries and relying on AHL call-ups will be noticeably weaker than the team that traded for the disgruntled, franchise player at the trade deadline who also happened to be that final piece in making that team a legitimate Stanley Cup contender.

EA Sports continues to build its online gaming community with its EA Sports Hockey Game and EA UHL 24/7. The former follows a liner progression with your player advancing through six skill levels. For players who prove to be among the best, they will receive name recognition and online-bragging rights when they become EA Sports All-Stars. At the very least, this adds an extra wrinkle of intrigue when you are playing a lower-ranked team with an All-Star amongst their roster. EA UHL 24/7 on the other hand could become the most innovative way to play hockey online. Promising a database of over 100,000 teams playing on a dedicated server, gamers will be given the option to challenge a team ranked slightly above, below or equal to them. For the gamer looking for the ultimate experience, they can also try their luck with a randomly chosen top one-hundred team. Gamers will have a near endless supply of teams of varying skill levels in which to compete against.

Finally, NHL '12 also features the Winter Classic series for gamers looking to emulate what has become a staple of the NHL season, with toques, falling snow and all. Improved lighting and textures provide a genuinely different presentation than games played in the NHL arenas.

Enhancements to game modes aside, EA Sports also promises an even more authentic hockey playing experience with NHL '12. Among the changes includes Anticipation AI technology. Players from the bench will react with bravado when a player on their team dishes out a big hit or scores a clutch goal. Teammates on the ice do a better job of working with you to set themselves up for a pass or to set a screen. Another enhancement to the gameplay in NHL '12 is full contact physics. In other words, a bigger player such as Zdeno Chara will have an easier time flattening a smaller player such as Brian Gionta. Smaller, quicker players will need to rely on their stickhandling to procure the puck as size and strength now are integral to how players react when in contact with one another.

A long standing fallacy of hockey video games has been the apparent invulnerability of goalies. NHL '12 has included new goalie physics where they no longer act like brick walls. Goalies take tumbles and react when bumped and players are more prone to be called for goaltending interference when they invade the crease. Net battles also provide moments of anticipation as defenders will come to their goalie's aid to clear pesky forwards away from the net. Throw in broken sticks, helmets flying off, and the ability to take players into the opposing team's bench and you got as true a video game simulation of professional hockey as you can get.

A final note worth mentioning from the build of NHL '12 at X'11 is the inclusion of NHL legends. EA Sports has put together a team of some of the NHL's best from the past and the present and put them on what could arguably be the best hockey team ever conceived. No longer would you have to rely on footage of the '87 Canada Cup to see Gretzky to Lemieux. Marvel as Patrick Roy redefines what it meant to play the butterfly style and see how well Sidney Crosby and Steven Stamkos measure up to Mr. Hockey, Gordie Howe. If playing shinny with NHL greats isn't enough, you can also bring them out of retirement to continue their NHL careers. Who wouldn't want to help Wayne Gretzky pad his already seemingly out-of-reach point totals just a little more?

NHL '12 may be a gamer's only option this fall for hockey video gaming but with the likelihood of roster updates and patches made available as the actual hockey season is under way, "holy macana", EA Sports has you covered once the puck drops on September 13 for the Playstation 3 and Xbox 360.