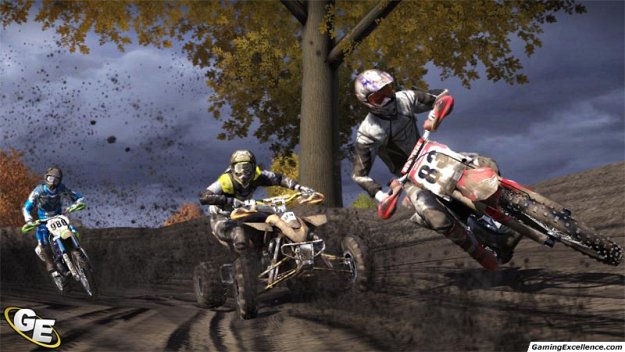 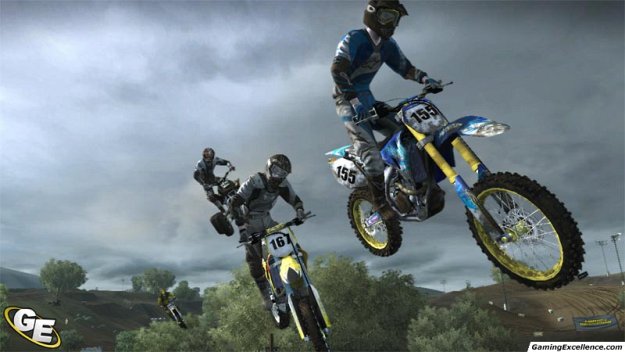 Tune your TV to any sports station on a Saturday afternoon and you'll likely either see people flying off jumps on dirt bikes, or D-list celebrities sitting around a table playing poker. It's debatable which activity has the bigger fanbase, but unlike televised poker, the appeal of motocross is easy to see. The melding of man and machine, the speed, the crazy amounts of air these drivers pull off, and watching somebody make a fifty foot faceplant into a mud puddle. It's all good stuff. Now, Saturday afternoon armchair athletes have a chance to live out their dirt covered dreams in the latest instalment of Rainbow Studios' MX vs. ATV series.

It's important to note that MvA doesn't necessarily do anything blatantly wrong. Unfortunately, it's just simply not a terribly exciting game to play, unless you happen to have Ricky Carmichael posters over your bed. The game offers several vehicle choices, including MX dirt bikes, ATVs, and dune buggies. You can utilise the title vehicles in both stunt and racing events.

When playing in single player, you're given a map of different events, and there are dozens in all, each with a focus on a certain vehicle. As you progress through the ranks, the lines cross over each other resulting in mixed events that combine vehicles. The racing itself is serviceable enough, and takes a fair amount of practice to get used to. This is not a game where you can just point your vehicle in the right direction and hold the accelerator down. You must shift your weight back and forth in order to maximize your air and distance after going up a dune. At first, this takes a lot of getting used to, and it feels like you don't have as much control as you would like. After some practice however, it'll become like second nature. All in all, the physics are impressive.

Unfortunately, landing feels infuriatingly inconsistent. You'll fly off a jump, do a stunt or two, line up what looks like a perfect landing, and instead faceplant painfully. Other times, you'll completely misjudge the angle off a hill, and somehow land with the grace of a ballerina. This problem is more noticeable on the dirt bikes, therefore making the ATVs much more fun to play.

However, the AI leaves something to be desired. They will generally follow their preset routines and lines, with little regard to what you're doing. They will drive straight into you and knock you off your bike with reckless aplomb. They also seem to have a pack mentality, meaning that you will almost always finish in first place or dead last.

The stunt events are also a lot more fun to play than the races. Here, you must do tricks in order to finish the event with the highest score of all the competitors. When you do a trick, a meter appears on the bottom, giving you a short time to link another trick for even more points. The tricks themselves feel satisfying to pull off, although it's nothing you haven't done before in other extreme sports titles.

It bears mentioning that MvA has the greatest loading screen ever. Instead of making you stare at a black screen, the game puts you in a wide open stunt track, allowing your practice your lands and tricks while you wait for the game to load. The game also doesn't force you out when the loading is done, merely press start when you're ready to go. This is definitely a feature that I can get behind, and it's a shame more games don't let you play something while they load.

For motocross junkies, the amount of customization is absolutely staggering. You can adjust things like gear ratios, suspension, and acceleration/top speed ratios. Beyond that, you can change lots of cosmetic features such as helmets, outfits, bike colours, even the brake pads and tire tread patterns.

As far as multiplayer goes, it is functional, but just as vanilla as the rest of the game. At least the entire game is available to be played online, as you can select any event you like and play with friends or strangers online. Xbox Live supports up to 12 players, but the PlayStation network only allows up to 8. The servers are generally lag free, and are more populated than I would have expected. Granted, I didn't try to play the game on a Saturday afternoon, when all the true motocross fans are glued to the latest dirt racing championship.

Beyond the more limited online capabilities of the PS3, there are also other significant flaws to the PS3 version. The frame rate on the PS3 is noticeably lower than the 360 version, and the environments and riders look generally less detailed. Also, the lousier framerate seems to affect the controls, which don't feel as polished and tight as on the 360.

Graphically, MvA is generally pretty good, with solidly detailed environments and riders. The animations on the riders are also good, but the real star of the show is the tracks that slowly get more and more deformed as the racers go through. The audiences are also animated and look solid.

The engine noises all sound pretty accurate, but has a really lousy announcer. He'll give a quick blurb as the game loads the starting line up, and then you never hear from him again. This is definitely a blessing in disguise, because his idiotic quips are simply awful. "We're going to keep everyone awake tonight with this race," he'll say, as if he's assuring you that the game is more exciting that your bored face would indicate. The game's soundtrack is great though, which features the likes of Nofx, My Chemical Romance, Nickelback, Disturbed, Mudvayne, among many others.

MvA doesn't do anything wrong per se, it's just not the game that's going to bring new fans over to the sport of motocross. It makes it hard to recommend the game when there are much more spectacular off road offerings like MotorStorm and DiRT. By all means, if you're a huge motocross fan, check it out. All others should consider no more than a rental.