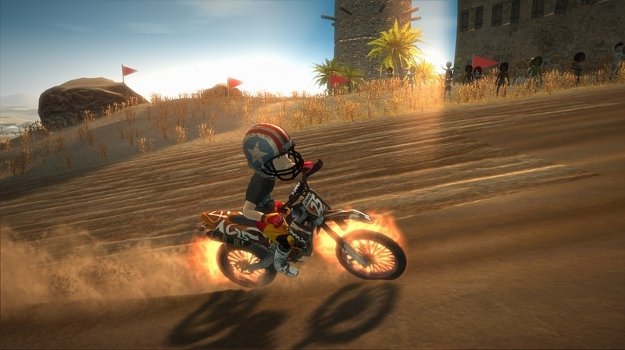 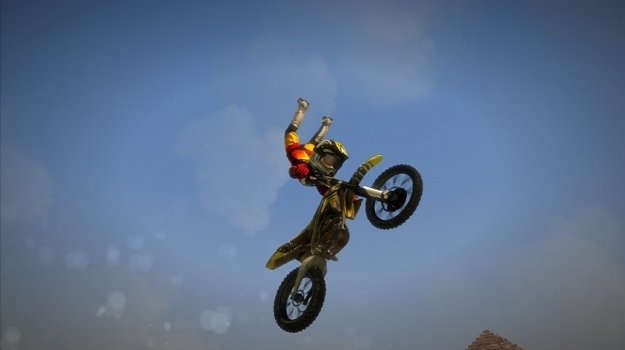 While dodging in and out of tree-covered forests, sailing over pyramids during a sick set, exploring new territory in arctic weather, and doing everything else one can and cannot imagine on two wheels, I could think of only one thing: Miley Cyrus.

This week in Los Angeles, while the city was gearing up to host the motocross madness known as the X Games, I geared up to play Motocross Madness on the Xbox Live Arcade. As the generic alliteration in the title would suggest, the game allows you to become a two-wheeled, dirt-defying master, just like the riders in the X Games. Players can ride in races, trick sessions, and free world explorations in several corners of the world, for just a 10 dollar download. Now, all this raises the following questions: Did Miley Cyrus ever race motorcycles?  And, if so, did she crash, resulting in where she is now?

Well, no; not to my knowledge at least. But my own thoughts about Miley started where all games start—the title screen. 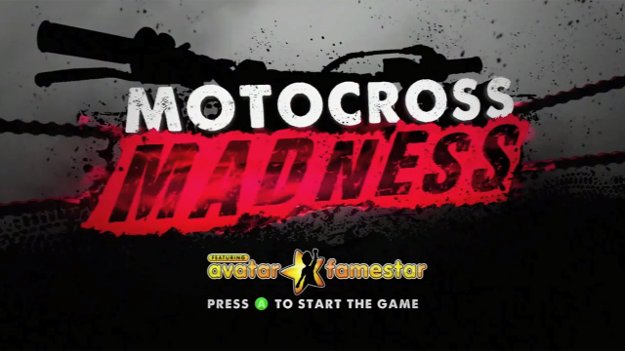 The title itself is emblazoned with fire, chains, and dirt, everything you wanted and got from the game’s original version back in 1998. But underneath, in the darkest depths of the “madness”—where eternal hope cannot see the light of day—there springs a few cute, bright yellow bubble letters that spell out “avatar famestar” in shiny childishness. As part of Microsoft’s attempt at appealing to all age types, Avatar Famestar is a system among Xbox Live Arcade games that lets your avatar gain points or “fame” as you progress through achievements in games, the main character of which (or the rider, in this case) is your avatar.

What that means for the game is that it must tackle a great irony similar to the one stars like Miley Cyrus, Justin Bieber, and Amanda Bynes face every day: appealing to the grime and grumble popular in the industry/sport while working from the base of safely entertaining youngsters. In other words, these avatars have to grow up fast and learn to bike while they are doing it. And although the game may seem a bit awkward to grown-up types, I think it may just be great for children, tweens, and anything else that wants to battle dirt before, one day, having to battle pimples.

The amount of game modes, customization, and action this download offers is impressive—a fantastic growth from what was offered in the 1998 version. It maintains the classic features like the brutal ragdoll crashes and a “slingshot” effect, after hitting an invisible boundary at the edge of a map. But with an eight-person multiplayer, split-screen option, and four game modes (Race, Rivals, Trick, and Exploration) on the career setting, it packs a lot more punch.

Tracks hit a lot of variety in their locations, with courses in places like Egypt, Australia, and Iceland. Players in the main setting (career) can choose to race the AI in these areas with the Race mode. The system rewards riders with boost for doing tricks and drifting around corners. Since the drifting controls are easy and well-designed, races can often be fun and dynamic, as one can go quickly from jump to corner to jump. The Rally mode really taps into that dynamic experience by having you race ghosts of the developers, pinning only your best lap time against theirs. The Trick and Exploration modes also really build on the 1998’s open experience by allowing racers to perform inconceivable tricks with their cartoonish character on places like the Sphinx or a rollercoaster park. The freedom is nice, especially in a game normally defined by racing boundaries.

And running through all this experience is an odd, internal experience that the growing teen stars face every day—looking at yourself doing something crazy. The cartoonish feel of the Avatars makes the ridiculous tricks and ragdoll crashes (which the game actually rewards you for, depending on how far you fall) seem more natural and fun. But at the same time, it does feel a little unnatural launching yourself through the air, into a giant pile of rocks, while flipping on a machine, on screen. Thankfully for me, my friends made my Avatar for me a while back, and I had no problems launching it off of any cliff.

But, again thankfully, because of the game’s great customization options, I was able to fix that.

Still though, the problems of placing Avatars in the game, besides my own obvious ones, are more numerous than one might think. And they bring out other problems in the gameplay.

The Avatar is a pretty clunky figure. To match, the maps in the game are pretty clunky, with large objects blocking paths and jumps. The fact that boost seems to make your character fall very easily (even when just grazing other riders), as well as make it land in places out of bounds, is frustrating. While the game is at its best when players can dynamically go from boost to tricks, this does not happen as much as it should because of frequent crashing. And it seems like it would happen even less with the younger audience it aims for.

In addition, there are only nine maps. There is no way to combine tricks with flips, which is standard both in game and real motocross. And the time penalty for crashing is too large. All these factors can combine to make for some monotonous and frustrating gameplay. 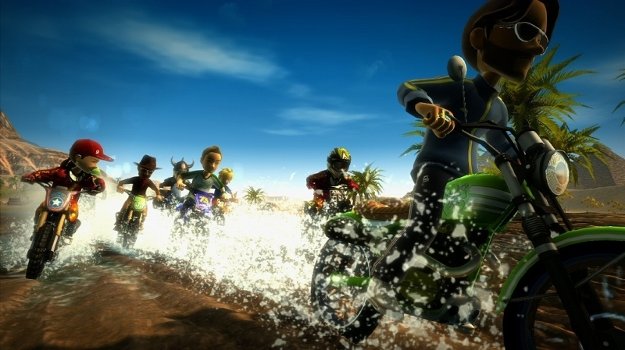 Motocross Madness tackled the tough task of being Miley Cyrus. Although it did not do it as gracefully as it could have (and partly because it did not do it gracefully as it could have), it succeeded. The game’s annoyances and odd mix of cutesy avatar and grimy motocross may not make it appeal to all, I think it will appeal to kids and tweens who are not yet confused or  frustrated by inconsistencies—just like with Miley. Hey, even her newest hit “We Can’t Stop,” featuring her twerking and mothers all over the world wincing, is still near the top of the charts.

With so many features for a ten dollar download, it’s a decent value for the whole family and a promising sign for more “Famestar” games to come.