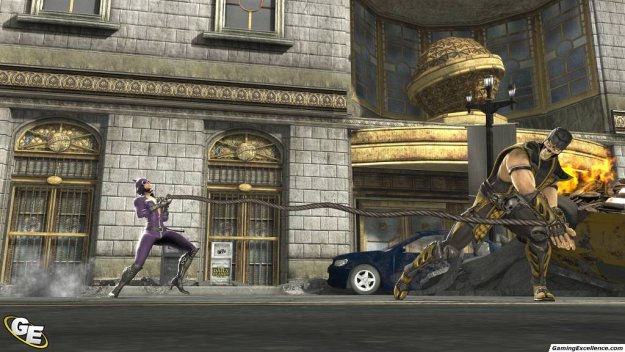 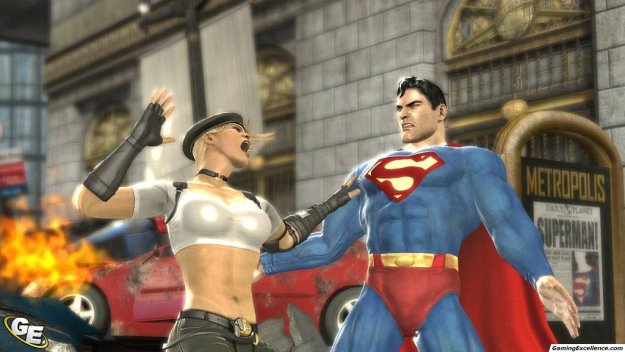 We all now Superman is faster than a speeding bullet and more powerful than a locomotive but can he hold his own against the Thunder God Raiden? Batman has ruled the box office this summer and seems virtually unstoppable to criminals and do-gooders alike but what if Sub-Zero vacationed in Gotham City? Wonder Woman is debatably the de-facto female superhero who exemplifies strength and determination but is she an equal match for Sonya Blade? These are questions that cannot easily be answered, but thanks to a recent demo of Mortal Kombat vs. DC Universe I was privy to, gamers will be able to find out for themselves who rules the roost in this very promising looking cross-over fighter.

While Midway isn't the first company to provide a successful crossover franchise, MK vs. DC plays and looks much differently than the very popular Capcom vs. Marvel games that dominated the last-gen systems. While C vs. M provided intense 2 on 2 and later 3 on 3 free for all battles with screen filling special moves and colorful, vibrant, and anime style graphics, MK vs. DC slows the gameplay down utilizing a less is more adage to its title. The combatants are well designed and have a more realistic look to them as do the battlegrounds they fight on. Fights are strictly mano-a-mano, and while some of the special attacks are a sight to behold, the odds of them blinding you with screen altering effects are minimal. If C vs. M catered more to the Street Fighter engine, then M vs. D adopts the very functional MK engine which gamers have grown familiar thanks to the most recent MK titles.

While the fighting engine remains similar to what gamers are use to; there are a few new elements that have been thrown into MK vs. DC. The first being Klose Kombat. This brings the two fighters together where you are able to slug it out with fists and feet flying. One of the unique features to come out of this is the visible facial and body damages that occur from repeated attacks to the face and body. While this has been used in other genres, it hasn't been adapted too well into a genre where you'd expect such a thing to be present. The amount of detail that has been put into showing more than just wear and tear is quite impressive. Although the game strives for a realistic look, the visuals of either your DC or MK character resembles that of something straight out of the comic books when a fight concludes. It's a nice if not necessary touch.

The other new addition worthy of a mention is the Freefall Kombat. It is simple enough, as it allows you and your opponent to continue to wail on one another as you fall from one area to the next. Midway has instituted a rock-paper-scissor type system which determines who gets to hit who and when. It keeps the fighting consistently up-tempo and also goes a long way to show off the impressive visuals that surround the combatants as they tumble to what would otherwise be an inevitable death. Much like Klose Kombat, it helps prevent fights from becoming stale or predictable, and someone who wants to master this game would be wise to make the most out of these two new fighting mechanics.

While it has been touched on already, the graphics in MK vs. DC are quite exceptional. Beyond the looks of the familiar characters from both the Mortal Kombat and DC universe, there are a number of expansive locals in which you will instantly recognize. Who wouldn't want to have a fight outside or inside the Daily Planet, or in the deepest, darkest parts of Hell? The game provides something dark to go along with its realistic aesthetics and does an excellent job of bringing two rather distinct universes together as one. This is a testament to the collaborative efforts of both Midway and DC Comics to provide a game that tries not to lean more to one of the franchises over the other. Although considering the vast and arguably radical differences between the two factions, it would be hard to deny that something will have to give to make this title an appropriate one for MK and DC fan boys(and girls) alike.

The most notable adjustment/sacrifice that has been made is a toning down of the blood and gore that is a staple in the MK Universe. There still is blood and quite a bit of it for that matter but those expecting to see Superman tear an opponent limb-from-limb (which he can most certainly do) or have Batman turn into a giant bat to maul an opponent, or have Wonder Woman use her magic lasso in ways that we have only been able to dream of will not find it here. It is easy to forget that the DC superheroes are just that, if not role models. This is not to say that they will not have their own unique finishing moves because they will and they are sure to be brutal but it would be more apt to consider them finishing moves over fatalities. As for the MK combatants, they will have a nice repertoire of attacks that while not as visceral as games past still make this title straddle that fine line between a T and an M ESRB Rating.

The build demoed didn't have much to offer outside of standard versus battles with only a handful of characters, but what was being presented looked and played great. Considering how busy November will be for prime titles puts MK vs. DC in some distinct company. Those who choose to overlook it might miss out on what could be one of the most underappreciated and underestimated fighters to come around in a long time.