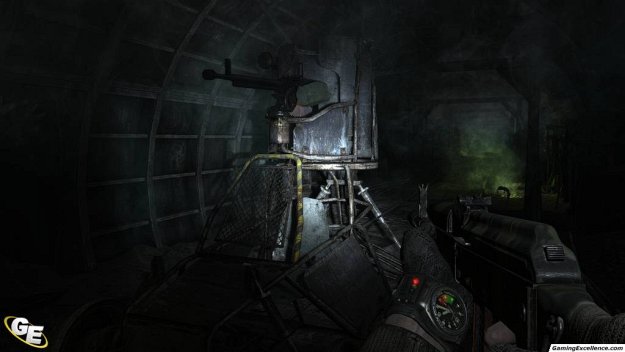 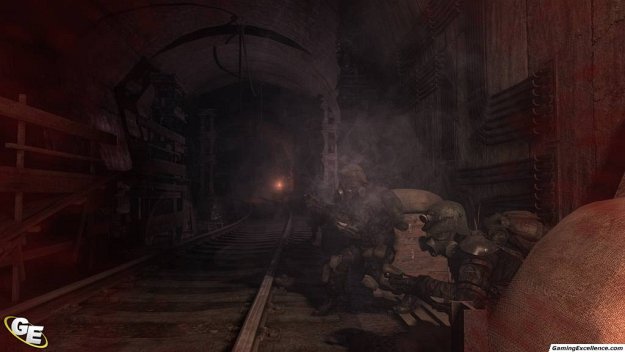 Moscow's underground has an interesting history. When first constructed, it was built to withstand a nuclear blast and in fact, was designed to act as a massive bomb shelter for its citizens. In Metro 2033, a book by Dmitry Glukhovsky, that fate has been met. A best-seller in Russia and currently being translated into other languages (including English), developer 4A couldn't pass on the opportunity to make Metro 2033 the basis of a new horror-shooter. Published by THQ, Metro 2033 is set to release in North America this March, and we recently had an opportunity to go hands-on with a recent build.

You play as Artyom, a man who has pretty much lived his entire life in Moscow's underground. In this world, resources are limited, and each station has become a very unique culture. Some are more civilized, while others have taken more extremist views, as an example one of the stations is occupied by Nazi's. The surface is uninhabitable to humans; only the mutated horrific creatures left from the blast cover its landscape. The only reason to venture out onto the surface is scavenging for highly-valuable post-blast resources like weapons and ammunition. And then there's the Dark Ones, a mysterious force that overcomes tunnel-dwellers, sending them into visions and eventually driving them into insanity. Their source is unknown, and you seem to be the only one unaffected by their powers.

Metro 2033 plays out like a typical linear shooter, with some freedom to explore within each station. The game is based heavily on scavenging and conservation, every bullet is invaluable and you'll never have enough when you need them. This theme is really driven-home by the fact that the in-game currency system is based around ammunition. Pre-blast ammo is a valued commodity, praised for its power and accuracy, wherein tunnel-built ammo and weapons tend to be far less accurate. You'll spend time gathering other resources as well, air filters for gas masks to allow you to head to the surface and larger more powerful weapons. Starting the game, you're provided with a small knife and a gun that couldn't hit the broadside of a barn from twenty feet, and set out on a journey through the Moscow tunnel system to discover the source of the Dark Ones.

Visually, the game looks very sharp and really helps accentuate the feeling of desperation and survival of the subway dwellers. Character and weapon models are crisp and very clean, and while dark, you'll find a ton of detail in the environment. With each subway station hosting a very different culture of people, it allows the developers to have a lot of freedom in creating a wide variety of locales within the game, and should help keep it fresh through to the end. The game plays with a very limited HUD, trying to keep it as cinematic as possible and emerge you in the Moscow underground, and does a great job at that from what I've seen thus far.

In my limited time with the game, I quickly recognized the great potential of the source material, and with some tweaking and a few shifts in the gameplay mechanics, Metro 2033 could be a really great shooter. With that said, the game in its current state isn't quite ready for the North American market, one of the key issues being there is never enough ammunition available, and the exceptionally high degree of difficulty in what I've played due to this fact. If you treat this as any other shooter and don't take the time to scavenge every corpse and explore the world looking for bullets, you'll never have enough ammunition to survive and have to rely on an ineffective rusty blade. While this is true to the source material, it doesn't necessarily make for a fun game, in fact it's mainly this lack of ammunition that makes the game feel so much more difficult then it actually is.

As well, a few other gameplay tweaks would really help put this on par with some of the great shooters released, picking up ammunition from bodies just by walking over them would be a nice change (rather then having to search them manually), and automatically switching to the knife when you're out of ammunition is a mechanic that I'd really like to see implemented, rather then having to manually switch whenever you run out of bullets. In the build I played, it was these small elements of polish that were very frustrating, certainly elements that could change prior to the final release. Metro 2033 has a ton of potential to be a great horror-shooter, and with a few tweaks and some polish it can hopefully live up to that potential.

Set to release on March 16th, Metro 2033 is shaping up and with a few gameplay tweaks could be a diamond in the rough. With the great potential of the source material and a couple of months before the game releases, we'll see what the development team can do in terms of polish. The immersive environment and great story is something I'm really looking forward to further exploring, and we'll have a full review as soon as the game ships.