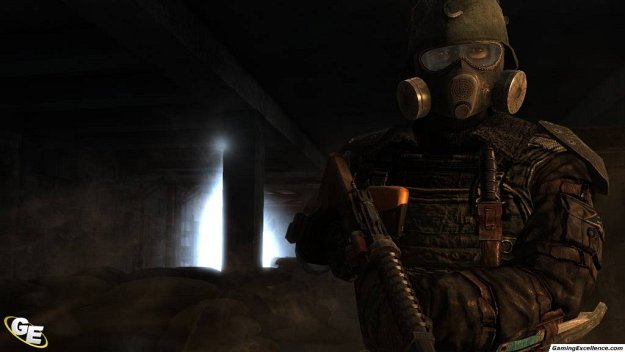 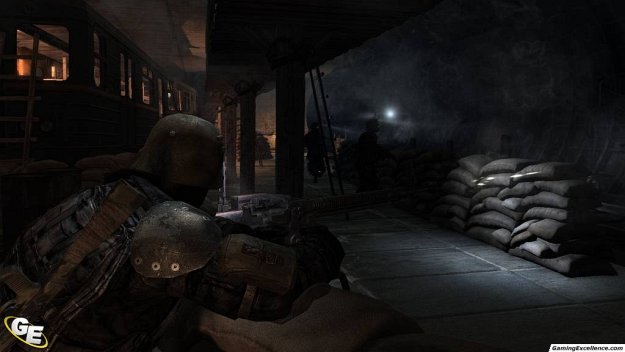 Every so often a game will come completely out of nowhere. It slides in right under the radar and manages to take you totally by surprise. These games are often made by new or up and coming development studios that most people really don't pay enough attention to and yet they manage to make games like Darksiders. The most recent game sleeper hit is definitely Metro 2033, a game that initially looked like a cheesy little b-horror movie inspired first person shooter but turned out to be a fair bit more than that.

Earth was destroyed years ago in a war of some sort that has left the world (or at least Russia) a radioactive mess. Those Russians who survived the war have abandoned the surface entirely due to this, choosing to instead make their home in the subway system that ran underneath their homeland. Due to this the surface has become infested with a new form of life; various mutants who have evolved to survive on the radioactive surface, flying through the skies or even harassing the humans underground. Stepping into this mess is our hero, Artyom, and through his ill-fated promise the player will be thrust into this strange new world.

On its surface Metro 2033 is a fairly typical example of the FPS genre with the notable exception that it's very story driven. Some might think to compare it to Fallout 3 but these are two very different games. You won't be doing any levelling up or assigning skill points in Metro 2033. The extent of your ability to modify your character is limited to choosing different weapons or weapons with different attachments (i.e. a pistol with a scope instead of a pistol with a silencer).

Considering the fact that the world has been blown to smithereens and weapons are built with whatever is at hand you will get most of your equipment from scavenging. The currency of the world is military-grade ammunition, well crafted ammo from before the war, and you will have to find these valuable cartridges. Most of these will be from dead bodies whether it's the frozen long dead or warm bodies of your own creation but others can be found lying around in various locations. With this currency you can either buy "dirty bullets", weaker and cheaper ammunition manufactured by residents of the Metro as well as various guns. At one point you can even buy a new suit of armour, increasing your defences or sneaking abilities. It's not so much character customization as weapon load-out management.

As you travel the lonely tunnels of the Metro, scavenging for bullets and equipment off of the dead bodies you will notice just how claustrophobic this game is. Much of your time is spent travelling the lonely tunnels with only the mutants for company. At best you may have a single companion to guide you along but even these moments are tense affairs fraught with mutant chases or sightings of ghostly images in the tunnels. Sometimes the things you think you see out of the corner of your headlamps light is more disconcerting than the enemy that's bearing down on you. Even when there are no actual threats in the dungeons you can still find yourself jumping at shadows.

Escaping to the surface is no consolation whatsoever because of its own manner of oppression. Due to the radiation that is blighting the land you will need to wear your gas mask at all times while above ground. Even though you will have to wear it at times while underground in hazardous areas you must wear it at all times above ground and it wears on you. Listening to Artyom's gasping as his filters run low, scavenging desperately for more filters from dead bodies and frantically fending off enemies so they don't shatter your mask on you all add up to make some of the most tense moments in recent video game memory.

Making matters yet worse, the skies are ruled by foul beasts that will stalk you if you don't hide from them. This turns certain areas of the surface into cat and mouse games and you are, unfortunately, the mouse. Paired up with the mutant attacks it means you will never feel safe on the surface. That's not even getting into what other things wait for you inside of some of the remaining buildings.

But the game doesn't try to coast on atmosphere alone; there is a solid game here. Considering that almost all of the guns are made of scavenged materials they're not exactly the most reliable things in the world. Accuracy tends to be a bit on the iffy side for much of the game - Although it will always land within your targeting reticule it's sometimes a bit hard to judge exactly where it will land. This is alleviated as time goes on since you get a weapon scope and pre-war guns that are very reliable but until then it can be annoying to some gamers. But much of this problem can be solved by using stealth instead of just barrelling into every combat situation in the game.

All of this atmosphere wouldn't mean a thing if the rest of the experience didn't add up. Luckily, for a smaller Ukrainian video game outfit, the guys at 4A Games have done a stellar job.

While the graphics aren't necessarily the greatest to ever grace the Xbox 360 they are more than suitable to the job especially considering most of the game is in near darkness. It's surprising just how good everything looks even under a scrutinizing eye. The only thing that's a bit lackluster are the human animations which can be on the robotic at times but you won't really notice since most humans you see are enemies and you will have more on your mind at these times. The lighting effects are especially notable as the light from your headlamp shines through the dusk and darkness, casting light and making shadows dance in equal measure.

The sound is something of a mixed bag when it comes to the voice acting but never where building atmosphere is concerned. Much of the voice acting was done by local talent which means you're listening to people talking with heavy accents. These don't always sound very convincing when speaking English, some of the inflections are off or the dialogue sounds like it's being read from a script. But where the atmosphere is concerned this always excels. When walking through the dark tunnels you will hear sounds that have you jumping whether it be the mutants making noise further in the tunnels, mysterious banging on the pipes or even haunting echoes of lives lost there's always something to make you yet more paranoid.

Metro 2033 is an incredibly chilling game experience. Many of the sections in the game aren't very difficult to get through, even on the hardest difficulty, but they will have you jumping at shadows nonetheless. There's just a sense of overwhelming dread that follows much of this experience that it's almost tempting to qualify this as a survival horror game. The guys at 4A have outdone themselves and there are even some surprises if you're a fan of the book. With enough dedication and you can unlock an alternate ending that deviates from the book totally but provides a more hopeful outlook on the ending. Regardless of how the story ends the experience itself is worth the price of admission.