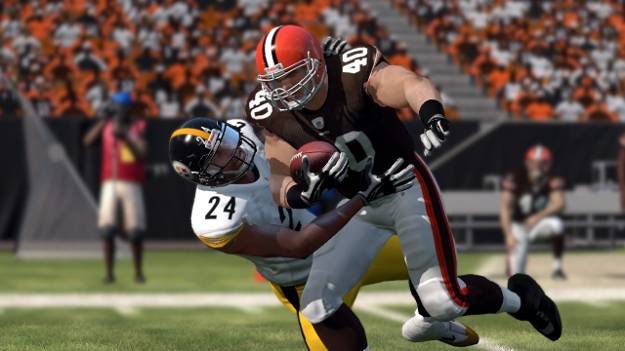 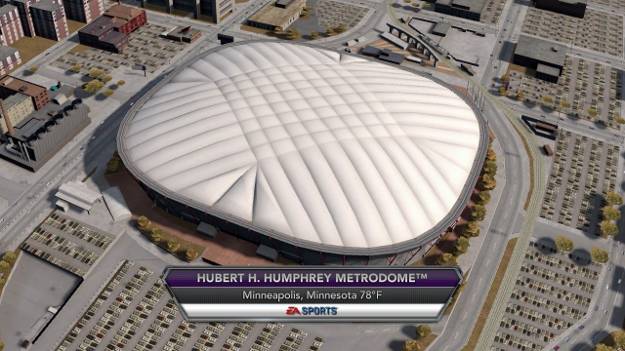 A confession before I get into this review. I'm not a huge football fan. I'm well versed in the rules, and I'm a playoff supporter of the Baltimore Ravens, but I could name more people that live in my neighbourhood than I could total NFL players. One thing I do know, however, is video games. I'm not a military man, but I know how to play Call of Duty. I'm not a space ship captain, but I've guided the Normandy across the galaxy in Mass Effect. I'm not a parkour running assassin, but I've made my way through Renaissance Italy in Assassin's Creed. The point is, is that video games are a great way to create escapism and a fantasy for yourself. One thing I know, video games are either fun or they're not. Is Madden NFL 12 a fun video game? Let's find out.

We can get this out of the way right now; Madden NFL 12 is undeniably fun. How much fun you get out of the game, however, is directly proportional to how big a fan of football you are. Let's be honest here, you've already decided if you're picking up Madden 12, either because you're glued to the tube every Sunday or you've played it in previous seasons.

The biggest thing to note, is that the action on the gridiron is rock solid. I personally found it easier to play defence than offence, and on the normal difficulty, my games were usually low scoring games in the 20 point high end. Improved from last year is a brand new collision system that has virtually eliminated all clipping, sliding players, and chintzy tackles. EA claims that 100 new tackle animations have been put in for this year's game, and the result is that any player must be in a prime tackling position to make a tackle. Fortunately, you can get a bit of help by pressing the A/X button to have your selected defensive player automatically play their assignment until you're ready to make the tackle.

On the offensive side of the ball, you better get your play reading abilities up to snuff, because the CPU is absolutely tenacious on defense. Passes must be bang on to catch the ball, and running plays are rarely able to gain more than 4 or 5 yards. Playing on normal, I was unable to once break free for a long run, and I played most of a season in franchise mode. You are given some pretty in depth control options for jukes, diving catches, and pump fakes. The better you master these, the more points you'll put on the board. Different players will also use their real life running and ball-carrying styles.

Also new this year is a Dynamic Player Performance, an AI system that affects player behaviour based on their real-life tendencies. If you're hardcore fan, you'll notice, if not, then it's just another meaningless bullet point on the box. Player confidence and game situations and pressure play a role, as do player ratings in those fields and 16 others. When you play in Franchise, the DPP system will go beyond individual plays, and change player ratings throughout the season based on their performance. The system forces you to keep track of player performance and adjusting your rosters accordingly. You can ignore it, and let the CPU handle that for you as well.

The biggest bone tossed to the casual fan is to allow the game to select your plays for you in a feature EA calls GameFlow. In between plays, you'll be given the option to pass, run, or stick to the gameplan. The game will do the rest, and in general the system is pretty good at picking the right play for the right situation. It's also great for speeding up games. For those who want to kick it old school, you can dive right into the official playbooks for every NFL team. For the truly hardcore, you can create custom playbooks by selecting a reported 400 plays from 75 different playbooks. You can even incorporate your custom playbook into GameFlow too.

That's probably my biggest problem with Madden NFL 12. You're either a hardcore fan that will take advantage of all these new features, or you can entirely ignore them. But at what point are you playing the game, or is the game just playing itself?

There's a smattering of modes to get your pigskin on, and most will jump right into the franchise mode. In addition the previously discussed features, the franchise mode has expanded the rosters to 75 players and rookie and try-out players in the pre-season. Ratings for players are released as you go through the pre-season. You can also scout rookies and bid against other teams on free agents. Keeping an eye on your salary cap is essential as well. Or, as you can expect, you can skip it all and just jump into the first game of the season. But if that's what you're going to do, what's the point of upgrading to the latest iteration of the game?

In a nice touch, you can play a season with up to 32 teams, allowing you to play a hot-seat season with roommates, friends, or family members.

You also jump into the Be a Superstar mode, which allows you to create a player and take them through an in-depth progression system where you earn skills and ratings points by practicing and playing games. An easy to use coaching system helps you play your position to the fullest. When you're done, you can choose a team or enter the draft. If you bought NCAA 12, you can also import your player. My problem with this mode is that I simply find it more compelling to control an entire team instead of an individual player. You can't pick your plays, and be a superstar ends up being much more repetitive than having the options available to you in the standard franchise mode.

On the online side of things, there's a very active online community to take part in. By splitting up players into communities of 2,000, you can find like minded players like you, and compete on smaller leaderboards. Within the communities, game styles can be customized with sliders so that everyone plays their style of game while still being ranked. It's actually a great system, and you can join up to five communities at once.

The other online option is Madden Ultimate Team. It's safe to say that if you're not a hardcore Madden-head, then you're not welcome to the Ultimate Team party. It's basically a mix of fantasy football, trading cards, and video game football. You build your team by earning points to buy cards. Cards represent different players, which can be traded to other people for their cards. Players can also be earned by winning games, through auctions, or by using real money. It's a total life sink, because points are earned very slowly. Just think of it as MMO for the NFL crowd.

Graphically speaking, Madden is fantastic, with a few small wrinkles. Player models are exquisitely detailed, the stadiums are all accurately modeled down to the grass type, and the presentation is exactly what you would see on an average NFL telecast. While the on field action is clipping free, I've seen players run through each other on the in between clips, and some bizarre glitches involving weather. These moments are minor, and don't detract much from the overall experience though.

I've said a few times in this review, and it bears repeating. Only buy Madden NFL 12 if you're a hardcore football fan. You'll find everything you're looking for in a pigskin simulator and then some. The casual fan will likely ignore most of the new features in favour of just tossing the ball around for some NFL action, which will be just as well served by any other previous Madden title for a fraction of the price.